If you have spotted bugs, please report those to Starling directly

Got my Starling card this morning and have been using since.
Works as expected and looks more bank-ish that Monzo (both pro and con).

App-wise, I didn’t like how transactions show up same way as my normal LBG card.
I really like how I can easily tell where I spent what on Monzo. Same for statistics.

Another thing I don’t like is how you are only permitted two ATM transactions per day.
I’m completely happy with the 300 gbp cap but although I’m going cashless as much as possible, I wouldn’t feel really comfortable going out for a while only with my Starling card in case something happens. I chatted with their support on that and they mentioned that most banks are limiting the number of ATM transactions but I am not aware of any so far…

EDIT: I like however the .5% interest you get. I understand it’s not much by any means but it makes it feel more like a proper bank.

Another thing I don’t like is how you are only permitted two ATM transactions per day.

So if you say take £10 in the morning and £10 later that day but then you decide to go on a session in the evening you can’t take anymore cash out at all?

Sadly this seems to be the case…

How much money can I take out from an ATM?
You can make up to two withdrawals per day, with a maximum total withdrawal per day of £300.

The cash isn’t allocated to any category apart from cash in the app without further input from yourself, so you have no information at the end of the month of where you’re spending your cash and on what , so cannot make many changes to your spending ‘habits’

why do people withdraw cash if there are other methods of buying i.e. POS terminals in most outlets in the UK ?

why do people withdraw cash if there are other methods of buying i.e. POS terminals in most outlets in the UK ?

people do so because they feel its a better way of managing their money. people that use black cabs pay in cash (although there are POS terminals available). i recently took a car to a garage and paid in cash.

While I generally tend to avoid spending cash, black cabs have a card surcharge (at least around here) and many pubs only do cards above £5. But for me it’s more about knowing that I can get access to some cash if needed.

This partly a PSA really - when Starling give you the option to apply for an overdraft in the app, the user’s shown this screen - 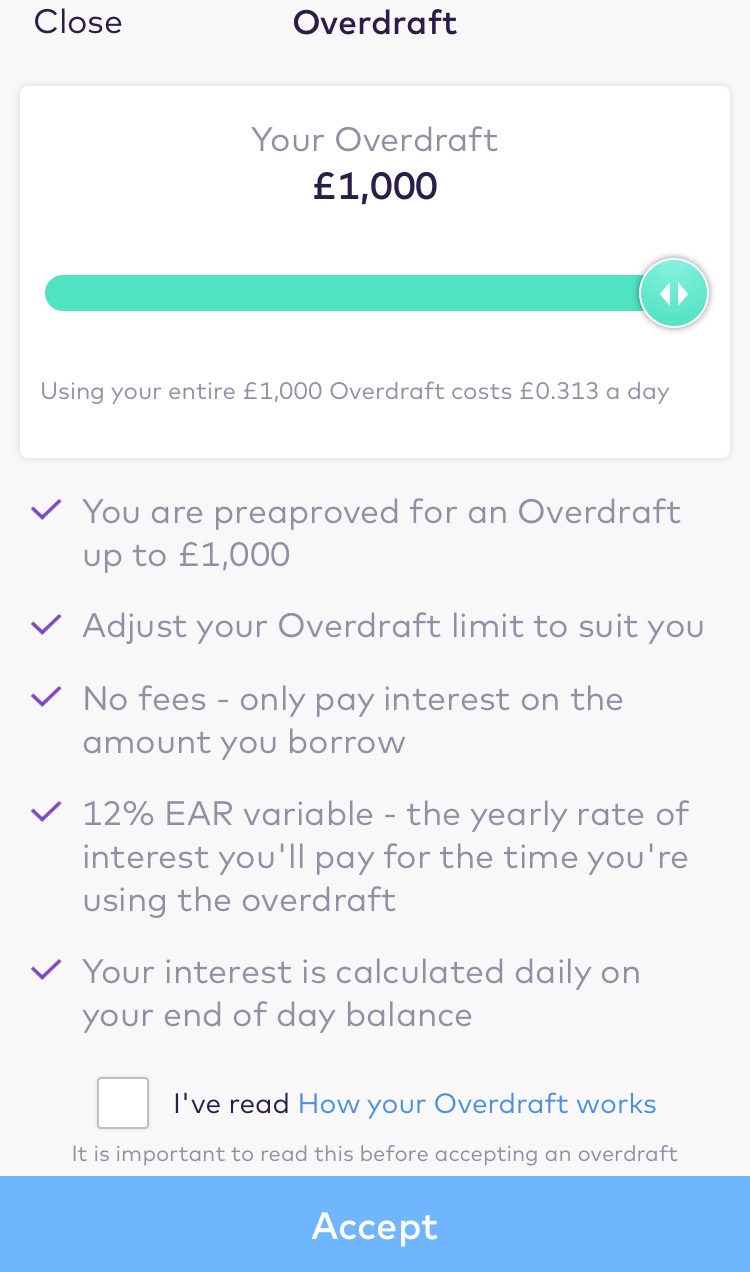 assuming that as soon as you tap the Accept button (I haven’t), you’re given an overdraft, the user is not warned either; on that screen or in the How Your Overdraft Works screen that there’s a link to there, that Starling will run a hard credit check on you which will appear in your credit history, before giving you an overdraft.

As far as I can tell, credit checks are only mentioned in their T’s & C’s where they say that they “will regularly conduct credit checks”. That was slightly worrying too, as it sounds like they could run a check on an ongoing basis but the support team told me that, assuming your account doesn’t go into arrears, they’ll only do a hard check, if you apply for an overdraft or to extend it.

It’s logical to assume that they will but I’m sure that this will catch some users out & I think it needs to be made much clearer - which I have fed back to them.

Eww. Meanwhile Metro bank spent quite some time in multiple stages making sure I was okay with a soft, identity credit check.

This is just one area where I hope Monzo will use a bit of design friction to make certain that a user understands what is about to happen.

Meanwhile Metro bank spent quite some time in multiple stages making sure I was okay with a soft, identity credit check.

I’m not too worried about soft checks but to pick up on that - their support also mentioned that they do a soft check when you open an account.

Oh yes, I’m just comparing how much of an issue Metro Bank made the soft checks out to be verses Starling just going ahead with a hard check.

I’m surprised that they can pre-approve overdrafts before a credit check is performed. I have pressed accept on the overdraft screen (I don’t plan on using it, I just wanted to see how fast the process was) and was given an overdraft instantly. I’d have thought that there’d be a bit of a delay (30 secs maybe?) if they were performing a hard credit check?

they do, it took about 10 minutes until I was notified I was verified. Guessing low numbers allow them to be very efficient.

From what I have seen there won’t be a hard credit check if you don’t take an overdraft.

Starling seems to be filling in merchant details on their own. Transactions that just had the name of the place at the time of transaction, show up with merchant logo and map position a day later. Interesting approach…

So does Monzo, at least for the name and image. But theyve had longer and more users to get the information from. If you’re one of the very first people to use a merchant you’ll just get the generic image and the name that comes from them, so rather than Sainsburys you’d be getting Sainsburys Sacat 00000 (for example). Then eventually after a few people have been someone will go and sort it out.

I’m surprised that they can pre-approve overdrafts before a credit check is performed. I have pressed accept on the overdraft screen (I don’t plan on using it, I just wanted to see how fast the process was) and was given an overdraft instantly.

Some bank’s can assess you based on your previous history with them. Barclays used to offer me quite significant pre-approved overdrafts and quite frankly astronomically high pre-approved loan offers, although the exact limit would vary month on month.

Yes I’ve just checked & Starling are building a merchant database like Monzo’s (it’ll be interesting to see what level of detail they capture for each merchant) so users can report missing / incorrect information & it’ll be updated.

Do they have an in-app submission form like Monzo, or do people have to manually submit through chat or email? Just curious really.