So I’m due some money from Ryanair for a hotel I had to pay for when they rerouted my flight via another city. Their standard form for Ryanair UK requires an IBAN which I can enter using a generator…but they pretty much said no as soon as they saw it was monzo as they don’t see it as a full bank!

I’ve reported in the in app chat and aware monzo can’t accept international payments - but I believe this would be a UK GBP payment. They just refuse to use monzo.

Anyone had any experience of this with Ryanair 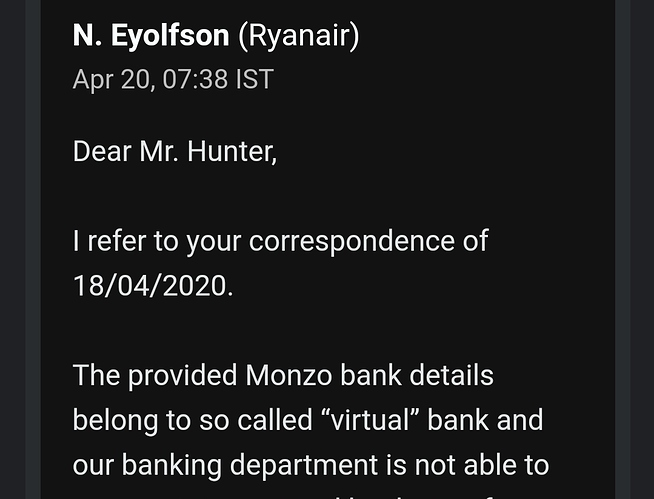 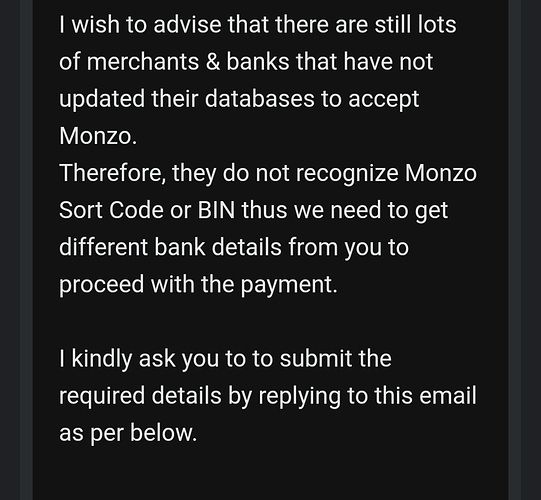 Just looking back at my account and I was paid by Ryanair into my Monzo account for an EC261 claim where I was asked for an IBAN in February last year.

I’d suggest reporting it to Monzo via the chat as you’ve already done but that still doesn’t help you reach your money in the meantime. Do you have another account you can use or could the money be paid into a family member’s account?

Sounds silly, but open up a starling account and give them that, they seem to be “established” in the “database”

If it’s not a real bank then why did they accept payment?

It’s Ryan Air if they can avoid giving you money they will try their hardest.

This is why I refuse to fly with them

Start a chargeback instead

Yeah I’ll use another bank. Just wondering if others had success and it sounds like you did. Maybe just a 1off person at Ryanair not sure what they’re talking about!

You can buy flights on a credit card or prepaid card. But refunds only to full bank accounts. (But I get what you mean)

I think that would fail as the flights were cancelled outside of Ryanair’s control and they gave me alternative flights. I just need to expense the hotel. Also it was all booked through loveholidays as an agent so would get even messier!

I guess if Ryanair refused to give a refund to your Monzo card. There isn’t a whole lot Monzo can do other than try to reach out to them but it wouldn’t be a quick fix

Yeh I thought they might say something along those lines but it was literally just a 1 line reply we apologize for any inconvenience caused. Not even - this isn’t true and it should have worked.

If you applied to a refund and they refused to refund to a valid card, that is definitely grounds for a chargeback. It is actually surprisingly little effort, as I did one yesterday

You can buy flights on a credit card or prepaid card. But refunds only to full bank accounts.

Mine is due to refund to my credit card

I’ve never had anyone not accept my Monzo account in all the years I’ve had one. When I hear stories like this or shops that randomly seem to say it; I just think how much I’d love to have it out with any company that comes up with this nonsense about it not being a “proper bank”.

If anyone needs to update their database (and their knowledge) in this situation it would seem to be Ryanair. I’d absolutely wipe the floor with them and see how far up the chain I could take it

Refund is probably the wrong word. It’s an EU261 claim for hotel expenses

It’s Ryan Air if they can avoid giving you money they will try their hardest.

This is why I refuse to fly with them

Actually it is generally accepted that it is much easier to get a refund from them than EasyJet or British Airways. For a start they have let you get a refund online instead of having to call.

So it is not a refund at all. It is a credit. Subtle but important difference. I imagine their system is “pay on card, refund to same card”, but for claims that system can’t exist.

Yeh to be fair to Ryanair - I’m normally all for bashing them but they’ve been pretty good rerouting during covid when we were stuck abroad and they actually have forms and processes setup online with a 12 hour response time for claims! Just this bit that’s gone awry!

Normally I’m right there with you. But I’m honestly so drained with form filling/complaining im just going to give them a diff bank account!