Joined back with Monzo (so happy too) but has anyone else noticed they have a new sort code. The usual one we all know is 04 00 04. However the new sort code on newer accounts is 04 00 03. Bear in mind some companies haven’t updated their systems so may say this is incorrect, however it is on the UK Sort Code Checker system and does work, the companies who question the authenticity just need to update their systems.

Has anyone seen this in the wild?

Some of the later ranges don’t seem to have all services enabled though.

Joined back with Monzo (so happy too) but has anyone else noticed they have a new sort code. The usual one we all know is 04 00 04. However the new sort code on newer accounts is 04 00 03.

I think this was mentioned previously:

Always wondered why Monzo haven’t allowed a secondary account, given they’re rolling the 04-00-03 sort code out.

Ooh thanks for this. Didn’t see this.

I really miss 04-00-26. Can anyone else use that sort code now they’re gone? Or is it forever lost/reserved(in case they come back)? 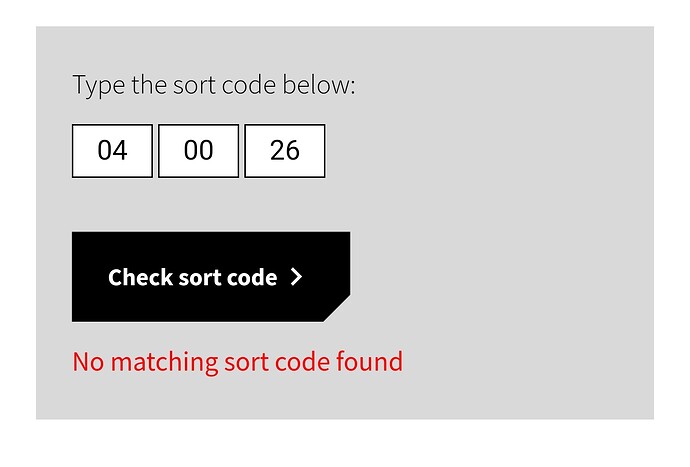 Just checked on the sort code checker and says it doesn’t exist so it must not be in service anymore and doubt it will work. I remember once a high street bank (not sure which) was changing all their sort codes for some reason.

A few of them did this. N&P changed correspondent bank and sort code. Then shut down which seemed to be a bit of a wasted effort.

And Santander rationalised all their sort codes moving (I think) the old Alliance and Leicester range to the old Abbey one.

I remember once a high street bank (not sure which) was changing all their sort codes for some reason.

You are probably thinking of “ring-fencing”, when new rules after the 2008 financial crisis required large U.K. banks to separate their investment banking from standard retail banking, into two legally-separate banks.

Some banks had used the same sort codes for all sorts of activity, and then had to divide them up which caused some customers to need new sort codes. Generally, a small number of customers who were not “inside the ring fence” (i.e. were not retail banking cusotmers) were affected. Not large groups of people.

Barclays did clear out a few sort codes for it though, and it was in the news at the time. HSBC also considered rebranding the retail side of the bank to make it clearer which part of the bank people were doing business with - but ultimately went for the fudge of adopting the name “HSBC UK” for retail banking.

Smaller operators changing correspond banks, or merging into one (as was the case with Santander) can also cause changes in sort code - as @Peter_G says.

Sort code | List of sort codes of the United Kingdom

In the United Kingdom the initial digits of bank sort codes were originally allocated to settlement members of the Cheque and Credit Clearing Company and the Belfast Bankers' Clearing Company. Today, sort codes are issued to any organisation that will be a direct member of a UK electronic payment network (in addition to the cheque clearing systems, this includes BACS, Faster Payments and CHAPS). Non-standard sort codes are issued to payment service providers who need an IBAN, for example for SEPA...

Yes, you can see the history of it too, which explains how some banks have ended up with several sort code ranges as a result of mergers and acquisitions. NatWest is one clear example.

Interesting discussion: I’ve never looked into the purpose of sort codes other than to identify a bank and branch: I have had many conversations about one of my account numbers for one of my high street bank accounts: this is because it is essentially a string with most numbers being the same eg 12223330 apparently it’s not too common.

For my last two debit cards for one account the CVV has been 777 and then 999 – it’s got to be extremely rare to get two triples in a row.

Also the last four digits of my first Starling card were 0000. I was sad when that one expired.

I think with sort codes they can only hold so many accounts before having to have a new sort code assigned. I guess Monzo do have over 7million customers so makes sense. Oooh a nice account number that is easy to remember would be great

That’s true! You’d possibly assume that the account numbers could start at 00000001 and end at 99999999, but that’s not actually true. There’s an algorithm which allows for validation, so some numbers are blocked because they don’t fit with it, and often account numbers are not assigned sequentially either because it would be too easy to guess the details of other people if they were. The useable amount of account numbers is therefore far fewer than simple maths would indicate!

Some banks will also separate out sort codes for different products (such as a sort code used only for ISAs, another for current accounts, etc); customer types (premier or private banking sort codes, often with more memorable or “special” numbering, plus personal/business); and even the traditional branch separation still exists in many cases - although these days, due to widespread branch closures, many branches are actually home to several sort codes, and the nominated branch is only nominal anyway now that all banking systems run on centralised computers.

Monzo sort codes use the “Double Alternative” method - and each of their sort codes have a different weighting processes to them - but about 10% of sort code combos turn out to be valid. (At least from a pure modulus check)

Very interesting, I hadn’t seen that document before. I did know it was called a modulus check but I wasn’t quite sure how it worked until now!

We once had an account with the number 40424042. Caused no end of confusion on the phone.

Just winding back, is this actually something that has happened already in the wild, as compared to being (future) potential?