Received iPhone from repair. (Cracked screen).
Shocked. This is the worst experience.
They swapped battery?! Why?
Screen - ok, but… attached screenshots 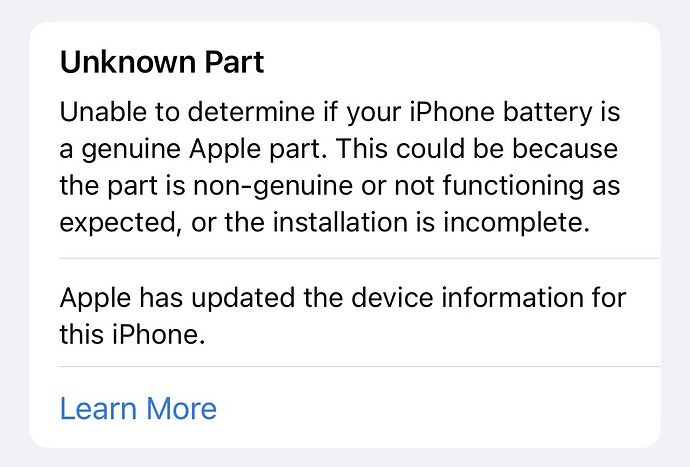 Have you tried complaining with the insurance company or the company that carries out the repair?

This is a big selling point of a lot of insurances and they’re all the same. Shoddy!

I used Nationwides phone insurance before… they use Lifestyle Services I believe. Not ideal but they used genuine parts.
Will never use Assurant again

insurances and they’re all the same. Shoddy!

Not all… mines with Amex (My Essentials - can’t get it any more). Any Apple product related issue they send you to Apple to get resolved… with a £50 excess too.
If it’s a stolen/loss Apple product, they either send you (via the Apple online store) a refurbished model.

Never had to make a claim for a non Apple product so no idea if they are that good with other products.

They swapped battery?! Why?

It’s possible they didn’t swap the battery, but disconnected it while repairing the screen and the BIOS thing that triggers the message tripped because of that.

It does mean they’re not an authorized Apple repair centre, and an authorized one would have the code to reset the BIOS and clear the message.

So, not a great repair experience either way! Corners definitely seem to be being cut.

Any Apple product related issue they send you to Apple to get resolved… with a £50 excess too.

If it goes to Apple you’re all good, not the rest of them

Does it cover everything?

I used Nationwides phone insurance before… they use Lifestyle Services I believe. Not ideal but they used genuine parts.
Will never use Assurant again

Nationwide use Assurant. I checked after reading this

Depends on what you mean by everything. AppleCare+ covers accidental damage and AppleCare+ Loss and Theft covers, well, loss and theft too

So none of the packaged account insurance products are worth it anymore… AppleCare+ is the only way, as said above

I’ve not had to claim in over 10 years, can’t remember who it was with but they just sent me a new phone.

It’s not widely known now but Apple do offer a self-repair programme now where you can (if you’re feeling brave/bored) - hire the equipment and fix your phone yourself.

It’s sometimes a little cheaper than the genius bar, but if you’re phone’s on the list and you feel like giving it a shot, it’s another way to get your screen fixed without that annoying message. As for Monzo’s repairer - I’m not too surprised that you’ll get that. Unless you go to an Apple Authorised Service Provider, they’ll not be able to do anything about that prompt. If anyone’s to blame, it’s apple for their poor consumer right to repair practices.

Pretty sure the repair program is for the US only and only the last few models. They also only support very few items within the phone itself. Then you have to rent the equipment which makes it the same price as if you got Apple to do it.

Contacted Assurant directly. They apologised and asked to send phone to them. As phone was repaired in one of their shops - Pocket geek tech repair all those shops are independently owned

This is bleak! Wonder if there’s a better partner that Monzo could chose?
Interested to hear if they fix the issue or compensate you etc!

No, the batteries are serialised to the board, same with the screen

Just unplugging it and plugging it back in, wouldn’t cause this - have a look at Hugh Jeffery’s, when he doesn’t replace the battery while repairing an iPhone, or Jerryrigeverthing