Merchant names are a mess

I know a few people have actually chased it with cops (I did for one merchant about a year a go, not the one I mentioned previous) when they don’t get updated after a period of a few months. Hopefully now prepaid is gone, it might be a bit more consistent

We know from @HughWells that merchant feedback is linked into Monzo’s internal systems so the community can’t edit it. However, I would employ a group of enthusiastic community volunteers, vetted and stripped of legal rights (through a contract) but then inducted into the cult of Monzo, to go through it. Free labour for Monzo for people who want to support them. Even have it done from the Monzo offices by the Community Liasons etc if legalisticly it cant be done remotely. It is something geeky enough for me to have a bash at it in my free time and, as a teacher, it wouldn’t want to legally mess up.

If (big if) Monzo wanted to crowd source / validate merchant feedback, surely investing some dev time into doing it through the app would be the way to go?.

That would take time, developing a part of the app which isn’t clearly a priority. I agree that should be the end game.

My point was that they could get a group of the community doing it in their office free tomorrow. Well, subject to vetting etc.

RCI Finance has been changed in the app to ‘Renault Finance’ with a Renault logo… but that’s just one of their brand names… it has 3 others (Nissan Finance, Dacia Finance and Infiniti Financial Services).

This caused some confusion until I realized what had happened… Alas the app doesn’t allow me to do more than submit a correction since a paragraph to explain why I thought it was wrong would help in this case.

This at least explains the PayPal issue. I had a few American Express transactions come up as PayPal.

One good thing would be to allow us to edit the Google suggestion that comes back when you search as I need to submit another one today and even that is slightly wrong so now I have to do it manually.

When in fact I got it from the restaurant there 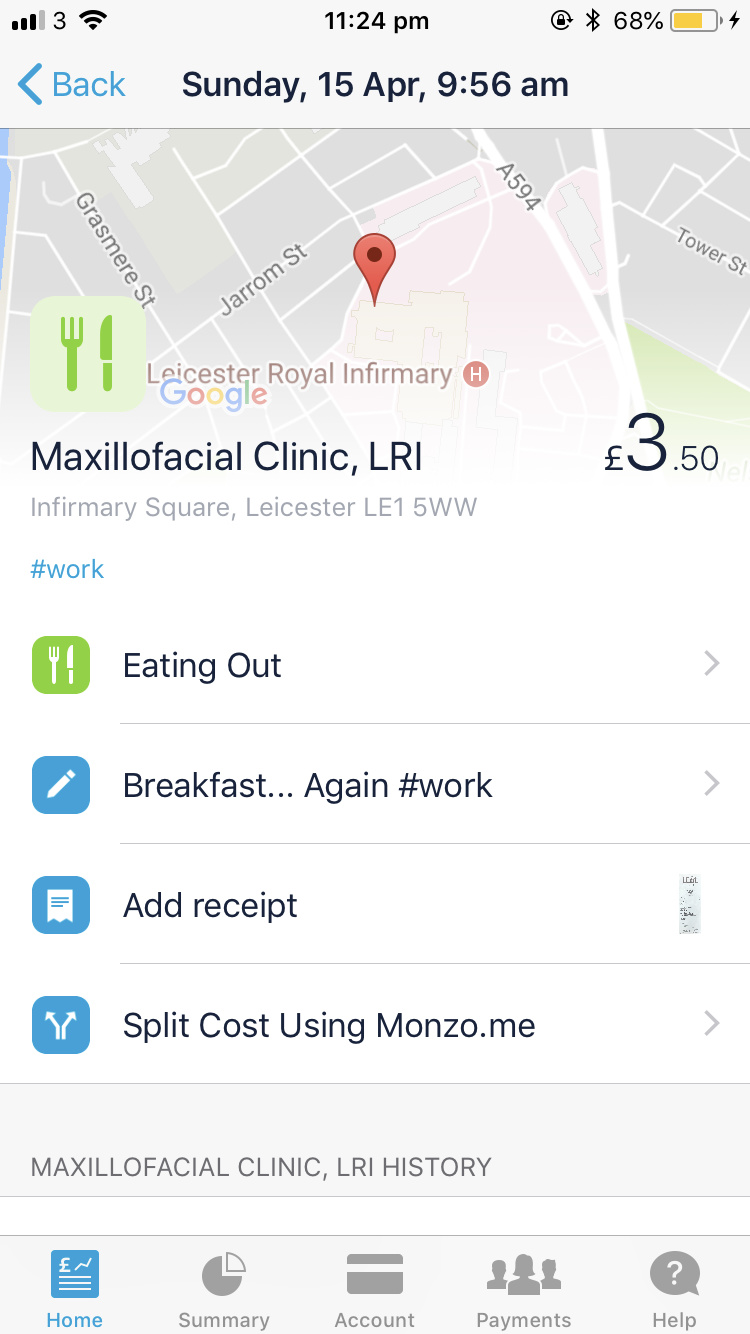 The payment terminals likely shows up as registered to the clinic …

If we were to change it to an in house cafe it might change other people’s medical bills.

Curious why a max fac clinic would have payment terminals. It’s NHS. Private treatment wouldn’t be billed in the department

I’m 99.9% sure they don’t have card terminals in that department

To update this, we’ve finally managed to identify a few possible usability problems in our tools that we believe are contributing to these issues with getting merchant logos updated. We’ll make these fixes very soon and you should start to see tasks getting completed more accurately.

There are a few other things that are also an issue, for example, unexpected data sent to us by merchants (especially where terminals are shared across multiple brands), some brands (such as Microsoft) using multiple payment processors and accounts, and so on.

We’ve implemented a few fixes to our automatic enrichment service to hopefully reduce the need to submit merchant data corrections (especially around merchants who put confirmation codes in their descriptions). We’re also collecting feedback around the process in general. While it likely won’t get rewritten in the too near future with everything else we’re working on, we’d love to put a team dedicated to the app and backend tooling on the task at some point.

Will this fix also include some kind of status that lets us know it’s been submitted and looked at etc?

This is great. I really don’t want to be bothering staff on the forum about these issues, it just really bugs me when merchant data is incorrect (probably pretty irrationally really)

If it’s any help, I listed some things that I feel would improve it on another thread

What would make you leave Monzo? Monzo Chat

I think I’ve mentioned this before so apologies I know it’s going around in circles a bit. Looking at it as an end user it could do with an overhaul: clearly allow logos from other social media not just pasting the link into where it mentions twitter an indication it’s in the queue to be reviewed/has been reviewed. When a company updates their Logo (Amex did this recently on Twitter) the old one still shows in the app? Crowd-sourcing data so if so many people submit one logo it auto approves. …

Will this fix also include some kind of status that lets us know it’s been submitted and looked at etc?

Not in this round of fixes unfortunately. This is something we hope to add in the future.

I’m going to see what I can do about this.

I’m going to see what I can do about this.

That would be good mate as there will be so many we all have it would just be a chore for us all to do.