You might remember a few months ago we launched a nice little feature to let you lock Pots for a set period of time. Back then, we said…

If you still want to remove the money, you can chat to us in the app and we’ll help. But if you just want to try it out, please pick a short time frame so you can access your money again quickly!

You’ve told us you really like the feature, but that talking to us every time you want to unlock early is a pain (both for you to have to wait and for us to cope with demand in customer support).

Today (the updates are on their way) we’re making it so that you don’t need to chat with us to unlock a Pot before the deadline. You have the option when you go into your Pot detail to unlock and withdraw the whole amount, and we’ll close the Pot for you.

We’ve decided not to let you unlock and withdraw part of the amount as a little extra deliberate friction. The idea behind locked Pots is to encourage you to save, and we think that extra incentive is useful, but ultimately it’s still up to you if you want to unlock the money.

This is how it looks… 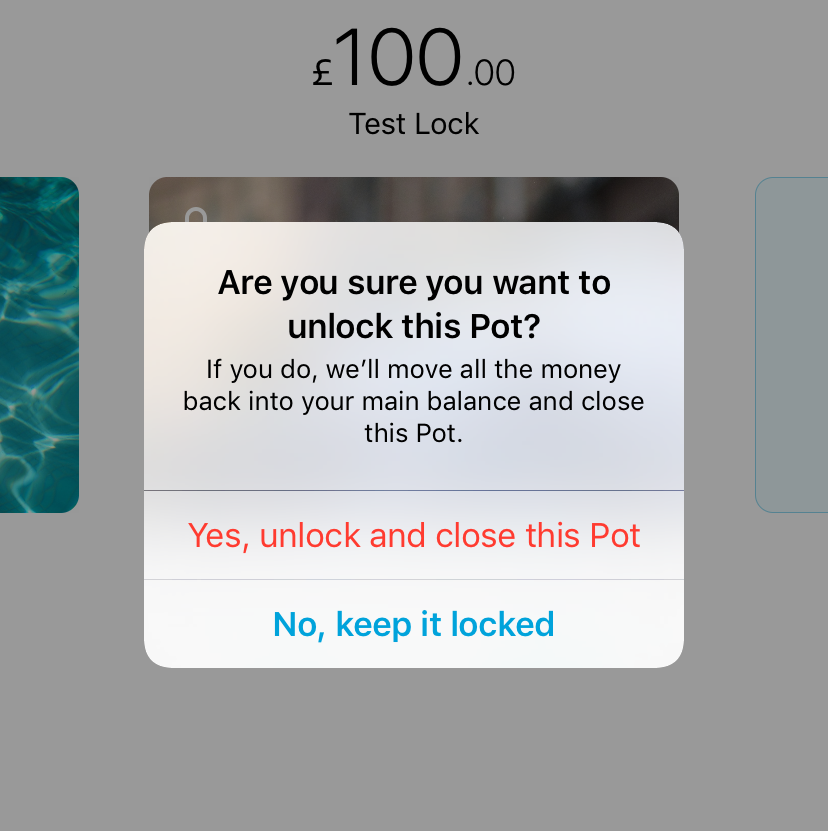 Let us know what you think! We’d like to get more sophisticated with locked Pots, and we’d love to know what other features you’d like to see.

19 Likes
Make it harder to unlock pots
Allow the CS team to unlock a pot rather than requiring to delete it
Unlocking Savings Pot
How we're supporting mental health
Friend Locked Pots
Locked pot until goal reached
Charge us a fee for unlocking pots early
What is the 'No Spendtember' Challenge and how can you start it?
Ability to lock pot until a certain amount is met
HoddzDJ 25 February 2019 13:33 #2

Hopefully they can be tweaked to just unlock rather than being deleted soon.

Needs a proper lock on it, that’s not friction

I think this needs more friction personally - a delay of 24 hours or something after you click unlock. In this form you’re taking the key feature (friction) and mostly removing it… making the point of locking almost pointless.

Everyone is going to have a opinion on what they feel is the right amount of friction but I think this is approach is great.

Whats the point of an pot you can unlock without friction. The whole point of locked Pots is to help people control their spending especially those that have a difficulty with it(those that may be compulsive spenders). I really don’t understand why you can’t automate the friction and place a time period on it.(You could even give us the triggers and ingredient on IFTTT to locked Pots).

Perhaps this could be combined with the original design - the 24 hour delay would be the default & then users could contact customer support if they needed access to the money more urgently?

I think what would work on top of this would a quick one to 5 of why you’re withdrawing early so that you can work(self evaluate) why.

Just to add some more context -

Unlocking your own Monzo Pot

Not sure how many but 20% of locked pots are unlocked by COps.

Unlocking your own Monzo Pot

Just found this Last week Locked Pots accounted for 6.5% of our total inbound.

Had lots of discussion about this, over here:

Hopefully, with the suggestions in these threads, small tweaks will be made in order to increase friction without directly increasing COps load beyond a reasonable level

Perhaps this could be combined with the original design - the 24 hour delay would be the default & then users could contact customer support if they needed access to the money more urgently?

It depends on how much friction will stop the CS team having to get involved.

I know the article states that it’s “what users want”, but it feels more like it was taking up too much CS resource time - So the chances are, if it has the potential to end up with CS to unlock it… It will (which is what Monzo don’t want).

Some stats for anyone who missed the thread last week.

20% of all locked pots are unlocked by CS.
Last week, locked pots accounted for 6.5% of their total inbound.
This was equivalent to 5 FTE COps and is/was growing 15-20% week on week.

*Stats courtesy of the one and only @BethS

From all the comments on the forum (both from Monzo and the users), it seems like the best way is to increase the friction from a user perspective, but decrease the need for CS.

Obviously the new route has very little/no friction (other than a few taps), and I’m not sure how deleting a pot is added friction (I guess it saves you the 5 seconds of setting up a new pot).

But if you increase the friction for the user, with NO option to get the money out immediately, you’ll inevitably have people putting ALL of their money in one of these pots, and then being left short.

Other than user education and a time delay on locked pots (as the best way to add friction without contacting CS) I’m struggling to think of a way around it.

Edit - @alexs beat me to the stats punch!

The whole point of using a locked pot is to restict you from using the money and taking it out. The idea of the pot being deleted in full upon early cancellation is something I support due to the friction.

Of course people are opting to use a locked pot. If you want to be able to access the money regularly, then just use a regular unlocked pot.

I personally think having to go through CS is maybe too much friction and naturally pulls on resource, but I think the pendulum has swung the other way - there is no real difference between this and a standard pot.

I think having a time delay in releasing the funds would be a good first step and maybe some further screens when you set a locked pot up would add friction at both ends whilst not relying on CoOps resource.

Just a thought but I wonder if its a steps thing( I would love to a User test/psychological test) on it.
The hypothesis is the more steps between unlocking a lock pot prevents you from unlocking a Pot. Logically meaning because an individual thinks about why they’re unlocking it(emergency/ compulsion they don’t need).
In practice what does this mean well there are a couple of ideas -

Not sure if it’s been mentioned but how about locking a point until a total amount is hit?!

Think I mentioned that on Slack once upon a time ago

but it’s a great idea!

(too many “locks” in the same sentence

Yeah - a 24hr ‘are you sure’ period (with a way to cancel that before the 24hrs is up) for a locked pot sounds like a good compromise.

Ideally you could choose amount/date locked but both should have the same ‘friction’ (and are unlocked automatically as soon as the amount/date is hit!).

Similar to sending a set phrase to a facebook messenger bot?

Do they currently have the ability to handled automated msgs/chat bot commands? If not, then a good idea but for another day??