I recently tried to set up a Direct Debit on a joint Monzo account for Three’s Broadband 5G service but and after error message on their online account management interface, I decided to do it over the phone.

I was rather unpleasantly surprised that Three would not set up a Direct Debit on a Monzo account, instead recommended using a “traditional bank”… the nerve of him to say Monzo ain’t a bank amarite?

Anyone experienced this or is it a pile of

I have had many contracts with Three and they were all paid with Direct Debits from my Monzo account.

I would suggest putting in a complaint to Three regarding this. Also contact Monzo about it. I believe the address is acceptance@monzo.com

I have a direct debit setup with Three on our Joint account. Didn’t have any issues

What was the error you got when doing it online? Was it just a generic error and not one related to the account details?

Yeah, I’ll second what other people are saying: I’m with Three and have a direct debit set up with them (on a personal account though). I changed it about two years ago through the website so not sure why you’re not able to.

On a side note: I’ll be switching away from Three in the summer. Every time I’ve had to call customer service it’s been a palaver

Ditto no issues, I changed my Direct Debit online

Since you have 5G broadband I suspect the issue is not with Three but Three Broadband (different backend systems). Best you can do is persist with them and there will be a solution somewhere.

Love the overwhelming support, thanks all. Ok, this is maybe linked to being a different company actually (Relish) but with a different person they did confirm it was possible to set up a debit card for the account, not direct debit with Monzo. And that can be done over the phone only because call centers are closed. Not great business continuity plan but hey, that’s temporary. I’ll still drop a line to acceptance@monzo.com 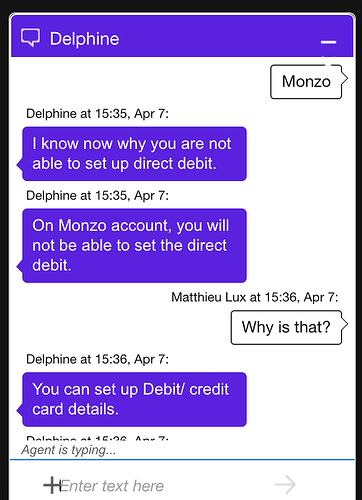 These issues used to be fairly common back when the Monzo current account was new.

It will probably be because they are using an out of date sort code database. Generally, systems will attempt to verify that a sort code accepts direct debits before processing the set up. They keep a white list of valid sort codes, and because Monzo uses a “new” sort code it has still, even now, not been added to the whitelist of every company.

This is very bad practice, since they are recommended to update their database at least every 30 days. This is especially important since it can also lead to a “false positive” where the sort codes of a defunct bank are incorrectly recognised as valid.

The Monzo acceptance team will get onto them to sort it if you email them!

I recently tried to set up a Direct Debit on a joint Monzo account for Three’s Broadband 5G service but and after error message on their online account management interface, I decided to do it over the phone.

Honestly, don’t do it… I’m on the 4G home broadband and it’s honestly terrible; whenever I call to complain or get support the Indian call centre fobbs me off saying that “the system is down” I’ve been trying to call for weeks before they shut down.

I’ve a very decent signal and on the outskirts of London, yet I can’t even stream in SD sometimes it’s been that poor.

You get 14 days to return with no penalties, so no harm in trying, even non spectacular 5g speeds should be faster than standard fibre to the cabinet speeds.

You get 14 days to return with no penalties, so no harm in trying

Indeed, my signal and speed was perfect for the first month or so…

Mine has improved somewhat after it totally tanked , but it’s nowhere near the speeds before these issues.

Honestly I’m strongly considering paying for Virgin and begrudgingly paying them for as long as I legally have to, then telling them where they can stick their 4G SIM. I wouldn’t stay at the end of the contract even if they said I could have it for zero a month.

Yeah their support is useless, it’s outsourced to tech Mahindra in India, so obviously they want to close each case as soon as possible as that’s what they will be monitored on by three.

Currently I have a voxi SIM in another 4g router both in bridge mode to my firewall because three speeds aren’t good enough, I keep waiting for them to roll 5g out in my area so I’ve not left.

Yeah their support is useless, it’s outsourced to tech Mahindra in India

Yeah, it’s no excuse though… Other companies outsource to other countries and there support can be excellent. I dread having to deal with them when I cancel the contract… Hopefully there’s an option to via my3.

Mine has improved somewhat after it totally tanked , but it’s nowhere near the speeds before these issues.

Strangly since they sent me a new sim card mine has too, but still drops quite a bit

Are you sure these negative reviews are about Three and not Three Broadband? Three Broadband is generally excellent within it’s coverage area and at very high speeds consistently.

Important to note that Three and Three Broadband (previously Relish, which was acquired by Three and rebranded) are separate so may have different systems, although I think there are plans to merge these together.

Strangely you can buy the same broadband products from both. 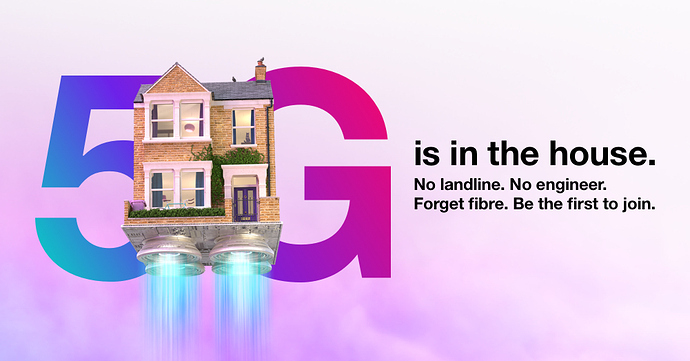 Get our super-fast ⚡⚡⚡ Home Broadband on 4G or fabulous 5G, in selected lucky cities. No landline or engineer needed. Just plug and play.