I just wanted to offer some feedback on the customer service I just received - Appreciate this may be covered elsewhere, but I couldn’t find a specific thread to tag onto.

I received a message just now which warned me of a duplicate transaction which would happen this afternoon!

Obviously I read the forums, so knew about the merchant issues and potential duplicates - But I thought I’d avoided it (clearly not, as the duplicate payment was from last Wednesday).

So, massive well done for reaching out before it even happened, and explaining the situation.

Proactively reaching out to a customer before it’s even happened! Most customers wouldn’t have had a clue what was going on, so this is incredibly good service.

Had I not seen the notification pop up on my screen, there was no visible notification (no little red circle or anything) - I know this has been documented before, but it could have easily been missed.

The message also didn’t say which transaction, or which account - It automatically opened to my personal account, but the duplicate transaction will be from my joint (process of elimination).

“Legal” name was used, rather than preferred name (which is the name on both of my Monzo accounts).

Seems to happen more times than not at the moment.

That aside - I am still left incredibly impressed that the message was sent in the first place.

I also appreciated the heads-up! Thank you. I had to go back to my iphone notification centre and then click on the message to access it from there as I couldn’t find it within the app. Agree that a little red dot or something to that effect would be extremely helpful.

Also - regarding the name issue. I prefer Matt to Matthew but can’t see anywhere to add my preferred name in. Can’t remember if I did this at the point of setting up the account but it is weird seeing my legal name as I never go by that.

This is a fair write–up.

I didn’t know there were issues. Where is this on the forums?

Also - regarding the name issue. I prefer Matt to Matthew but can’t see anywhere to add my preferred name in. Can’t remember if I did this at the point of setting up the account but it is weird seeing my legal name as I never go by that.

I didn’t know there were issues. Where is this on the forums?

Now you’re asking… It was either here, the Starling forum, or twitter.

Either that, or I imagined the whole thing.

Why does the COp even need to see the legal name when interacting with a user? If the Scalers make it so that the systems only show the COps the user’s preferred name (and maybe if sometimes required the legal name could be demoted to a sub-field along with a reminder to not to use it in communication with the user) then Simon doesn’t need to send circulars to 100-200 staff reminding them to go against their intuition and use people’s nicknames.

Apparently the preferred name is pretty much front and centre when OPs interact with you. I imagine these messages are somewhat automated so they may have just used the legal one?

Very cool that they were able to warn people though

But without wishing to take away from what was a positive experience overall, if Monzo are going to adopt the “preferred name” policy, I’m sure they’d rather it was consistent.

I don’t know if it’s possible to remove my “legal” name altogether?

Sorry about the legal/preferred name issue

This is a bit of a issue with the way Intercom pulls data and sometimes it ends up out of sync. As has been noted this was a “automated” message in the sense that it was sent to all of the 10k customers affected with the same content.

Why does the COp even need to see the legal name when interacting with a user?

It’s helpful to be able to see it and doesn’t make sense to hide it.

Out of curiosity - If I’d signed up initially as “Nick” (even though all legal documents show “Nicholas”, would that have been OK?

If I’d signed up initially as “Nick” (even though all legal documents show “Nicholas”, would that have been OK?

As your legal name? No - we’d have modified it during the ID check to match that on your ID documents

I changed my preferred name on my account yesterday and now it won’t let me apply for an overdraft… Ooops! Chatting with someone through the app about this now. I assume it is because of the name switch but might be something else.

I would have thought it would be something else.

Even with my name switch, I could apply for an OD.

I spoke with @simonb about the name thing and when they get the new chat client in then the whole name thing will be resolved and we’ll always be called our preferred name (I also got some generic messages about duplicate card transactions but not the one you had @nickh and @BristolMatt).

@nickh Have you had the money back yet? I’m still waiting. It was only £9 in my case but it would be nice to get it back!

Not sure if my situation was the same as others, but I paid for something for £6 on the 29th August.

I then received the message from Monzo on the 3rd September in the morning explaining about the duplicate charge that would happen.

That afternoon I had another £6 charged, followed by an immediate £6 refund, so I wasn’t out of pocket for more than a second.

Underneath the transaction, it says “delayed from the 29th August”.

Not sure if that’s a common example in situations like this - But I barely noticed it.

Hmm, hopefully I’ll eventually get my £9 back…

Likewise for my £18.
Be good to hear an explanation of what went wrong here and why some people were proactively warned it would happen and refunded immediately, whereas some of us had to ask and are still waiting “… because we’re waiting to get it from the banks”.

I don’t know whether it makes any difference but I contacted the merchant who is showing as taking the £9 twice and they told me that the fault lie with Lloyds Bank Cardnet. Lloyds could not say when my money would be refunded.

Very happy with the card I had today apologising for the name issue. Anyone else get one?

Be nice if a few more places had customer service like this - I’m looking at you, O2… 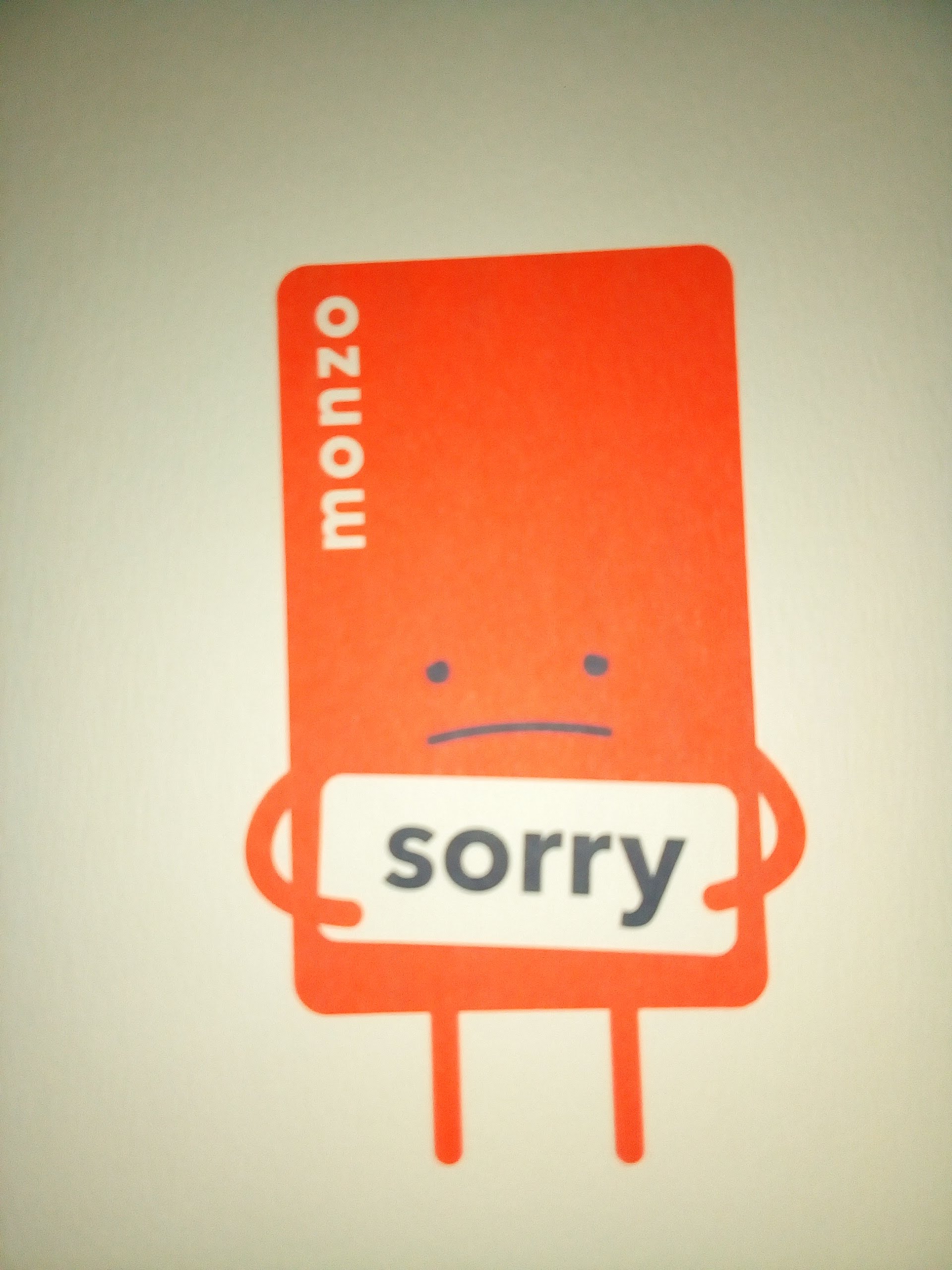 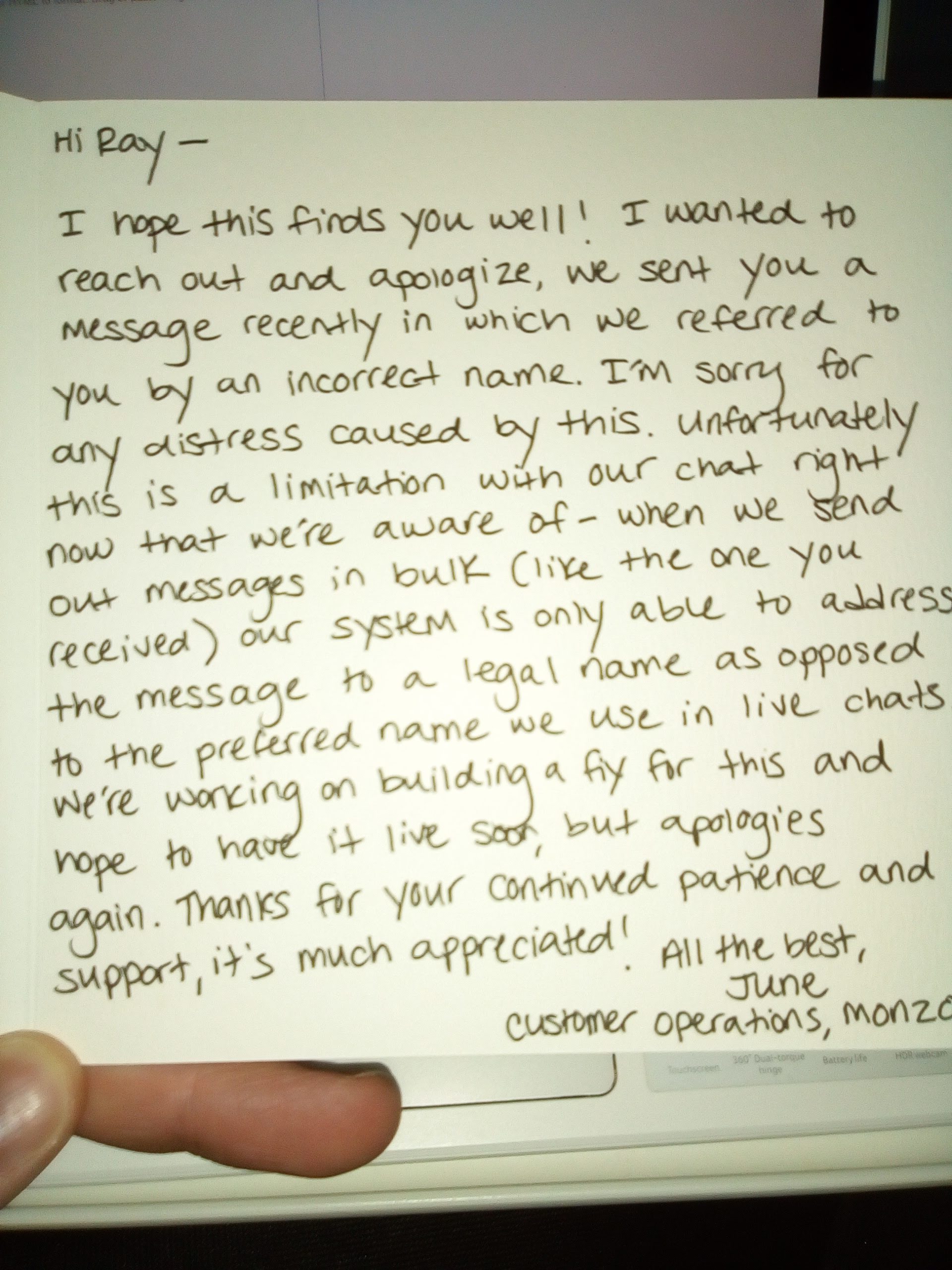