It’s nearly upon us, Google have released a bit of a teaser, will be a Bluetooth and LTE version available, prices are just people all over guessing, with most around the £300 - £399 mark for the LTE and cheaper for just Bluetooth 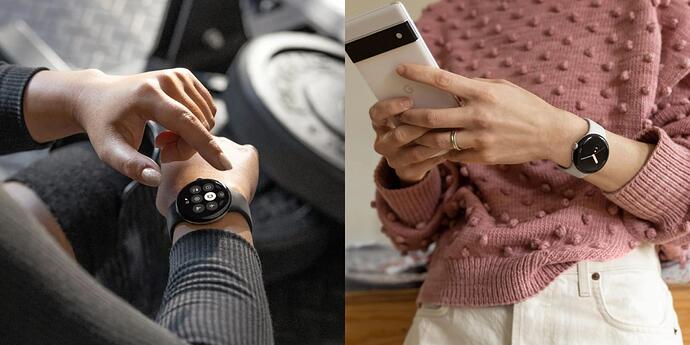 Google officially announced its first smartwatch at I/O 2022 in May, but only provided a “first look” ahead of the full reveal this fall alongside the Pixel 7 and 7 Pro. 9to5Google has revealed a number of new details since then, and here’s...

Given that it’s Google, I’m going to reserve judgement until the reviews actually hit. But it does looks really nice. Highlights for me: lovely design (IMHO) custom silicon (finally!) a top of the line sensor Probablly going to be pricey but it’s going to be really interesting how to see how good its pics are given that Google have resolutely stuck to the same ancient sensor for so many years and still managed to be competitive.

It looks super neat! From the still I can’t tell it’s a smartwatch!

Is anyone going to cop it?

For me probably not. I have an inherited Rolex I would never want to replace

. But it’s still a more immediately attractive watch than an Apple Watch.

Pixels will definitely be on my shortlist for next new phone and if I was at that point considering a smart watch too, this would be a draw.

Oh wow! What Rolex is it if you don’t mind sharing?

I may be tempted into buying it, been registered for launch day since forever it feels. I’ll wait and see what all the press release stuff is looking like on the day.

It’s a Stella dial with an aqua blue watch face, from the mid 70s I think.

I’ve worn it pretty much everyday since I got it. I don’t believe in keeping things in a box. It’s probably not worth much anymore given the condition but it’s very nice to look at.

Repairs are expensive when needed though.

Anyway, this is like the opposite of the topic

I really like the look of this watch. Health features and battery life would be deciding factor for most people over design, I feel

I feel like it being essentially a Fitbit device will be a really big incentive in terms of health. If you already own a Fitbit or are looking at one, it’s an attractive new option and Fitbit is still the best ‘general user’ fitness tracking app by far I reckon. Even a lot of iPhone users may be tempted.

I mean it’s something to glance at, I’m not that fussed about bezel size. If I want a full screen I’ve got a phone in my pocket or sat next to me.

I love being able to look at my wrist and see if I’ll need an umbrella as I’m about to walk out the door, rather than having to stop, take my phone out and open an app

I’ve been registered since they first announced it too but waiting on the battery life - everything else is secondary to me (even notification is less - at my age I have to put my glasses on to read them anyway so same difference to getting the phone out).

Watch though, already ordered ‘because’…

I think I’m gonna skip it, I don’t wear a watch ever. Be pretty much the most useless bit of tech that I own.

Ditto. If it’s light I should probably be doing something- if it’s dark I shouldn’t. No need for a watch in my case. Can’t think when I last wore one. R-

Main reason I like my Apple Watch is all the health tracking.

Everything else I could live without, albeit it does offer a lot of convenience.

Very tempted by this.

My sister has already pre-ordered a 7 Pro and she’ll get the Watch for free.