Monzo, we need to talk about Payments, Payees and the Payments Tab!

but now I feel totally in control.

Discovering a service which makes you feel this way is one of modern-life’s wonders.
Especially when it is directly involved with your personal finances and therefore indirectly responsible for your well-being and life enjoyment.

I sound a bit ‘motivational’ there, but certain things make life just… better.

Discovering a service which makes you feel this way is one of modern-life’s wonders.

I’m going to bang this drum a bit more because I think it’s important:

It’s the little things, like improving the “left to pay” calculation that @YorkshireWill describes that really makes an excellent service.

But this needs imagination, a desire for excellence and to do a bit more.

It’s not something delivered through user research, data or by relying on an MVP that is never iterated on.

(For clarity, user research, data and MVPs have their place. But need to be coupled with a pursuit of joy, of going that little be further, and developing a sense of wow that you can never quantity and will never directly add to the bottom line. But add up all the little sprinkles of something special and you end up with a product that’s priceless and magic).

this may not be the last time I beat this drum

Bang away. Influence to making people’s finances easier to understand, more satisfying to engage with and more informed about the choices involved is massive.

Bang away. I’m right behind you.

Not as it sounds…

Not as it sounds…

I’m trying to pay a Monzo joint account from my Monzo personal. Dammed if I can find the payees. I thought they would ‘show’ as it’s a Monzo to Monzo payment I’m trying. Do I need to add the payees joint account details like I would another bank - so account number and sort code?

joint account you’re involved with, you can simply ‘Move money’ from the Payments tab.

joint account with someone(s) you are not involved with, then it’s just a regular bank transfer.

Thanks. I could see their personal account but not their joint account. Had to add as a new payee. I just thought it would show as it’s Monzo to Monzo still.

Not sure if this has ever been mentioned before but I came across something I would class as a UI bug.

In the payments tab, under “scheduled”, under “Subscriptions & Direct Debits” I can see all my direct debits, which are set to be paid from a “Bills” pot.
But I can’t see a card subscription there.

The card subscription shows correctly in the pot, under the “left to be paid” option.

Shouldn’t it also show in the Payments/Scheduled area?

Are you on iOS? There’s been a few reports of Payments-related issues recently…

They’re not shown in the designated Bills pot though, as you can’t assign Subscriptions/CPA’s to be paid from a Bills pot

It can be done with a virtual card.

I’ve got a subscriptions pot set up this way and the subscriptions don’t show up ion the main Payments tab of the app but they do show when I check the Upcoming payments under the pot’s Manage tab for the pot.

Ah, it’s a VC. That explains it then.

Yes, I should have specified it’s a subscription paid with a virtual card (that’s what I meant when I said “card subcription”) created in the Bills pot.

So, should this not appear in Scheduled payments?

So, should this not appear in Scheduled payments?

Okkkk… I now understand the technical bit.
But… shouldn’t it show in the Scheduled payments tab, where all the other scheduled payments show (even those that are set to be paid from the same pot)? Isn’t this arrangement inconsistent?

so I expect all payments that come out of that pot to show there, not just some payments.

The various payments from the pot are going to 2 different accounts - one to the account which is your main Monzo account and one to the Virtual account. The Payments tab shows only Personal and Joint accounts (possibly Business accounts too) - it doesn’t yet show Virtual accounts. Until it does, payments made via virtual cards will only show in the pot(s) which fund the virtual card.

Two thoughts on that:

a) I don’t know what’s happened to Monzo. Are they unable or unwilling to improve things? Do they think the app is done? What’s happened to their development velocity? Why are we in a situation where we’re unwilling as a community to think about wider improvement because we’re worrying about the paucity of resources for customer focused changes?

b) by highlighting this stuff, I’m not trying to take away from anyone else’s priority. Transparency being the best disinfectant and all that, I just wanted to highlight where things could do better.

Couldn’t agree more. It’s what the forum is for. And if all Monzo’s developers can only work on one feature at a time then they’re done for (but we already know that’s not at all how they work internally, adding more ballast to the argument for fixing up this part of the app)

Not sure if this is new or not (but it is for me). Bill splits are now showing in a list on the payments tab rather than a separate one. A good move IMO as it makes outstanding requests much more visible. 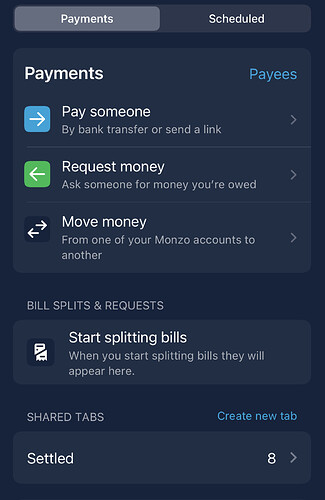 iOS? I still have a third tab on Android…