I have removed my old Monzo card from my Google Pay account and added my new virtual card which I have created as part of Monzo Plus.

It’s registered the card and I can use it with things like buying movies or apps through Google but it won’t allow me to register it for contactless payments.

As you can see, it advises me to contact Monzo.

Is it because when it comes to the occasional verify with pin, there’s no card to use at the terminal?

Any particular reason for this? Really defeats the whole purpose for me…

Because you can only use them online

It is in sorts ‘online’. You can use Google Pay to pay for things through Just Eat and the Play Store.

It’s just not set up for mobile payments - due to regulatory requirements of doing so.

For now you’ll be limited to “remember card details” options rather than mobile pay.

A bit dissapointing but understandable, thank you. 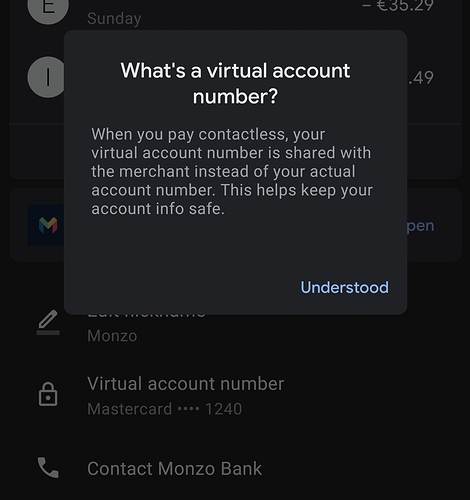 Sorry to revive an old thread,

I am facing a similar issue. I have added a Virtual Card through Google Pay (web). It shows up in the Google Pay (app), but wants verification before it can be used for contactless. Upon attempting to verify it takes me into the Monzo app where… nothing happens. I authenticate, and land at the feed with no prompts to verify anything.

When viewing the Virtual Card in Monzo I have the option to add it to Google Pay (app). I can do do that, and get the prompt to authenticate back in Monzo, but then Google Pay (app) tells me the card is already added and I get no further.

Is the consensus still that Virtual Cards shouldn’t be used for contactless via the Google Pay (app)?

When I was waiting for my card to arrive but there was an error in setting it up with Apple Pay (long story) this is exactly what I did.

If you attempt to add the card in via wallet it’ll fail.

But if you create a pot, create a virtual card it’ll let you do it, as below. 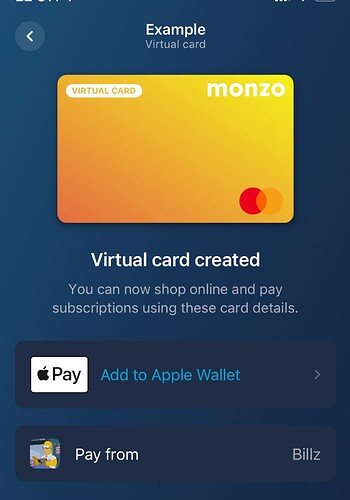 This worked really well via contactless till my actual card arrived

EDIT: just realised this is a really old thread, so it may not have been possible at the time!