Metal card will not fit in atm in Mallorca

I’m in S’illot in Mallorca and just tried to withdraw money from a Euronet Worldwide ATM.

I was unable to insert the metal card into the green reader it just kept getting stuck. My partners standard monzo card fit fine. 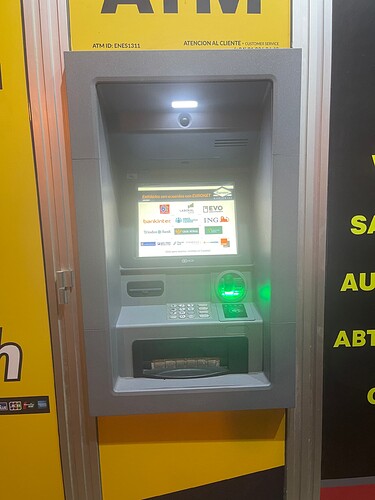 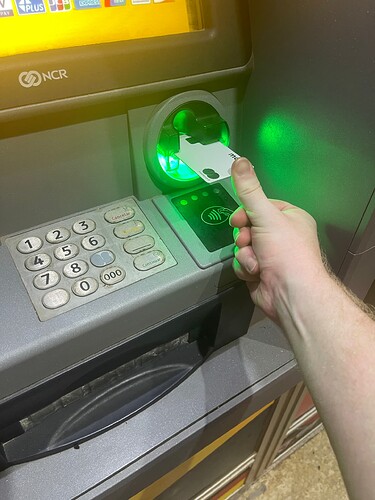 I guess that’s inevitable with metal cards in some ATMs.

Also I thought Euronext ATMs are a rip off in fees. I usually try to find a bank ATM.

We used some of the bank ones over in Palma, but over in this resort this one seems to be the only one that’s either not out of service or that won’t add a 7€ fee for not accepting their conversion rate sadly

Sounds like more of a design flaw of the international ATM if you can use it in the UK ATMs fine.

Monzo could also design it, by shaving off a few hundred micrometers, so that it fits every ATM in the world

Interesting holiday project @garethlowrie . Sand down your card gently until it fits and send the dimensions and weight to aid a future Monzo redesign

I thought debit cards were an international standard size? Unless Monzo has got their card thickness wrong, it’s more than likely the ATM provider who’s got their gap too thin? You’d think Monzo didn’t make the card too thick

This made me LOL. Of course it’s a design flaw with ATMs and not the card!

On the other hand, it could be possible that this ATM has been hijacked with a skimmer, hence the metal card being too big. The gaps on these are typically narrower. With that said though, to my eye, it doesn’t necessarily look like one.

Unsure what I said was funny, but my comment was phrased like this because this was posted in the ‘Feedback and ideas’.

Maybe I should make a career change

This made me LOL. Of course it’s a design flaw with ATMs and not the card!

To be fair to Monzo, I too have had issues with some ATM’s and the metal card but many where I had no such issues.

I don’t know if it was a dig at Monzo, but I’m not sure what Monzo are supposed to do? Test it with every ATM? Are there design standards for ATM’s, I guess there must be?

I may have totally misunderstood your angle btw

The notion that the ATM design is at fault, which predates Monzo’s premium card, as opposed to the card which does not fit in said ATM.

Maybe it’s just me, but I found that a rather comical take, because to me, logically, it’s surely the other way around, no?

but I’m not sure what Monzo are supposed to do? Test it with every ATM?

That’s their job! There are standards. It can vary slightly, but the specifications are available. They don’t actually need to travel the world inserting the cards into every ATM they come across. They get the specs from the vendors and make sure their cards are compatible.

It’s why I poised the theory of a potential skimmer. They cover the proper hole with a device, and the hole on those is usually slimmer, too slim for a metal card to fit. It doesn’t look like one to my eye from the image posted, but you never know!

I too have had issues with some ATM’s

As I say, it’s not an issue I’ve experienced with my own metal cards, and I’m not inclined to sign up to premium just to see if the Monzo card is any thicker, and by how much!

Maybe @Carlo1460 could compare against his Revolut cards.

They get the specs from the vendors and make sure their cards are compatible.

Yeah I totally get you. I think it’s good that these are raised so that Monzo can start to see if there is an issue, and if so adjust.

Sounds like it was just this ATM, in this case perhaps.

Looking at the photo of the ATM, it looks like it has been fitted with an anti-skimmer device (the big green thing), so it could be that making the slot a little narrower than usual.

Or it could just be one of those things were all devices are built to tolerances, and what we have here is a combination of a card at its upper tolerance range meeting a machine at its lower tolerance range.

Both cards are visibly and physically the same RE monzo and Revolut metal.

I’d be aiming toward the machine having the issue, as I’ve never had a problem.

Having said that, I also don’t use cash very often so can’t really have an input in a variety of machines used.

I would think there are design parameters for these things. I doubt Monzo sits down and goes ‘I wonder how thick we should make our metal cards’.

Mastercard will have a spec, Monzo will conform to it, and ATMs saying they take Mastercard should be able to take them. That’s the only sensible way I can see it working, and it means it’s an ATM issue.

As others said, probably not unexpected with a metal card.

Mastercard will have a spec

Assume it will be an ISO

It seems that the ‘standard’ thickness for debit cards is 0.76mm but Monzo have gone for the 0.83mm which is at the upper end of the ISO spec (still technically within it) but against the ‘standard’ of 99% of other cards which I’m guessing that ATM was designed for.

EuroNet machines are really a con to use

Avoid at all costs

It would be better to open a starling account + a euro account, they’ll do the transaction for a low-ish fee and you withdraw it in local currency