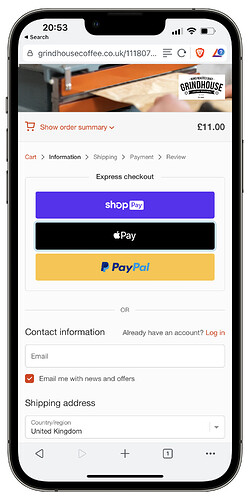 Hasn’t this always been a thing? I’m on iOS 15.6 and used Apple Pay in a browser yesterday

Apple Pay for the web has been around for several years but it only ever worked in safar, because only Safari could plug into it. Third parties haven’t been able to plug into it til iOS 16.

The browser you used yesterday will have been Safari.

Grindhouse??? You got yourself another coffee machine?

Haha! Not yet. Just buying some pre-ground for my French press.

One thing I have noticed that occurs in almost all betas is the usage of the music player on the Lock Screen doesn’t “count” towards keeping the screen awake.

If I’m skipping songs, the screen dims after the set seconds and I have to tap again to carry on, despite the fact I’ve been tapping constantly to skip songs.

I don’t think this was always a thing, but Safari now works upside down for me? Ie if I hold my phone upside down it rotates to match. Not sure if it’s a bug or intended but the UI works nicely too…

Either that’s a bug or you’ve just got a load of people to stare at their phone’s intently while they spin them around…but would be cool if it did do.

Can you post a screenshot of it running upside down?

Edit: oooh with and without keyboard please

It looks normal. The home bar is under the notch, of course, but I find I can just swipe from the notch and it works as expected every time.

Yeah I was wondering what the home bar would do, and if the globe/speech recognition buttons would be pushed up the screen or flow down into the ‘ears’.

Anyway, you’ve got yourself a bug. It’ll probably go away if you restart your phone - or maybe even force quit safari.

I quite like it though! I like not having the notch at the top and it taking up space in the unused space at the bottom instead. And yes, the buttons are in the ‘ears’

Mine doesn’t rotate on my 13 pm either

Mine doesn’t go upside down, will only going into landscape 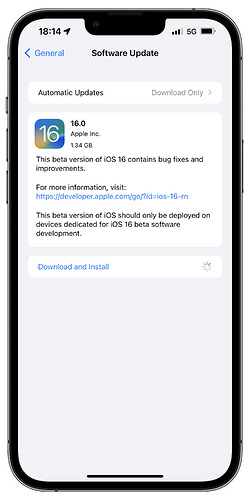