If you’ve contacted our support recently, you might have noticed that the chat looks and feels a bit different. That’s because we’ve built our own new tool from scratch!

Here’s the details about why we’ve done that, and what it means for you: 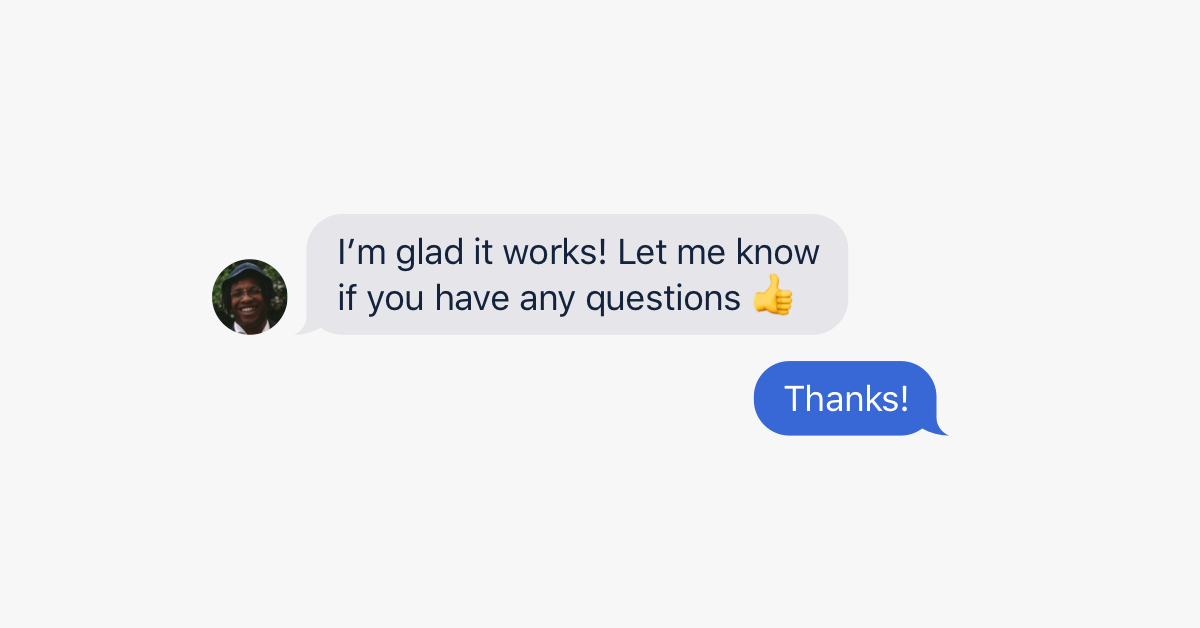 So we can keep making Monzo customer support even better, we’ve built our own software to manage chats in the app.

If you can’t see old chat on the app, is a chat log emailed as a record?

Out of interest what does this look like from Monzo’s side?

Very, very similar to in app!

Firstly, I understand why a new chat system may be better/more suitable in the long run, so see where you’re coming from on that angle.

Previously, you could have several conversations with us at the same time, and they would be in different chat windows. That made it tricky sometimes to keep track of who you’d spoken to.

No offence to any individual COps, but I don’t care who I’m talking to, I care about the particular issue I’m having at that moment. Having separate chats a la Intercom worked perfectly for that. I could also have a couple of different issues on the go at once (hopefully not though!).

Having everything in one chat makes it more confusing, not less, IMO.

Sounds great! All up for moving systems to internal.
Any plans to intergrate with iMessage on iOS? This is the ultimate banking experience. Alternatively, quick replies from notification / lock screen?

Glad to see an official blog post about this

Seems to be a good step forward for the future

Recently used it and here is my feedback:

Just used Monzo chat for the first time after having an urgent query last night, support was excellent as always but the new chat experience is poor and it really frustrated me during it’s use: When typing out a long message I had to switch to another app to find some details. Upon going back to the Monzo app my message had been deleted

. Ended up typing it out in the notes app and pasting it across. I had to press the send button multiple times for the message to actually send. …

Pleased to read that a lot of what I’ve mentioned seems to be in the works which is fantastic to hear, although I feel the feature set should have been closer matching before rolling out to so many people.

Currently I’m not a fan of the new design. Doesn’t give much information in regards to people being online, how long to expect a response, whether the messaged had delivered, queue length, etc. I know it’s still in early stages however a mass release when there are less features than previously doesn’t seem logical to me. I tried sending a message yesterday which didn’t seem to go through and have had to resend it today, awaiting response.

I’m still on the old chat, so can’t comment on first hand experience.

But I’d echo other thoughts.

It’s great Monzo are taking on the challenge of setting up their own in house system - They clearly have the talent to make, and execute a very good system in the long run (which will be far more cost effective I’d imagine).

Considering the chat is the main source of CS, coupled with the current very long lead times… It leads to a poor CS experience for a lot of people (as shown by the amount of comments on this forum).

I joined Monzo (and moved my banking to Monzo), because the CS was very quick, and very very good - The second part is still true, but the first part is now lacking - When you factor in the new system, it probably brings the entire experience down to average/poor at best - Which is a real shame, considering this was one of Monzo’s huge strengths.

I’d have preferred to see the new system developed to within 90% of Intercom, and then gradually move people over.

It would appear that the new system is closer to 50% of what Intercom had, with no ETA for when feature parity (and beyond) will be achieved.

Second this, they should have iterated on the new chat with only say 15% or 20% of people having access, then roll it out to more users once it matched the main feature set of the current system.

Otherwise it feels like a step back in time for nearly all users.

There may have been reasons otherwise but who knows…

I’m glad it’s not just me. I do love using Monzo which is probably why it’s more frustrating when it appears like a step back. Never wanted a bank to succeed more than I want Monzo to.

Hmmmm I think Cleo and ANNA both use single chats rather than several conversations with different staff. I can see the reasons why a single thing would work well but I’m not sure if I like this change at Monzo, I guess I’ll see next time I have multiple issues at the same time and see how well it is to fix them simultaneously. Hopefully that doesn’t happen though!

I’ve never had multiple chats with cops going at once, surely it’s better for one cop to deal with all the issues at once or you bring them up after each other is resolved.

I can just imagine there being issues if two cops are looking into issues on your account that the other may not be aware of.
Perhaps the issues are related.

I’m open to change, I think this should have been worked on a little more before releasing though (unless intercom was a massive cost). This will work for now and I’m sure it will soon be a pleasure to use!

Regarding the “one chat” thing, I can see benefits and drawbacks to both methods. I’m interested to see how this works out

Are the delivered/read indicators on the screenshots in the blog post implemented already or is this a planned feature?

I don’t have them on my side and I’m wondering if everything is even working right as I’m not getting any replies? 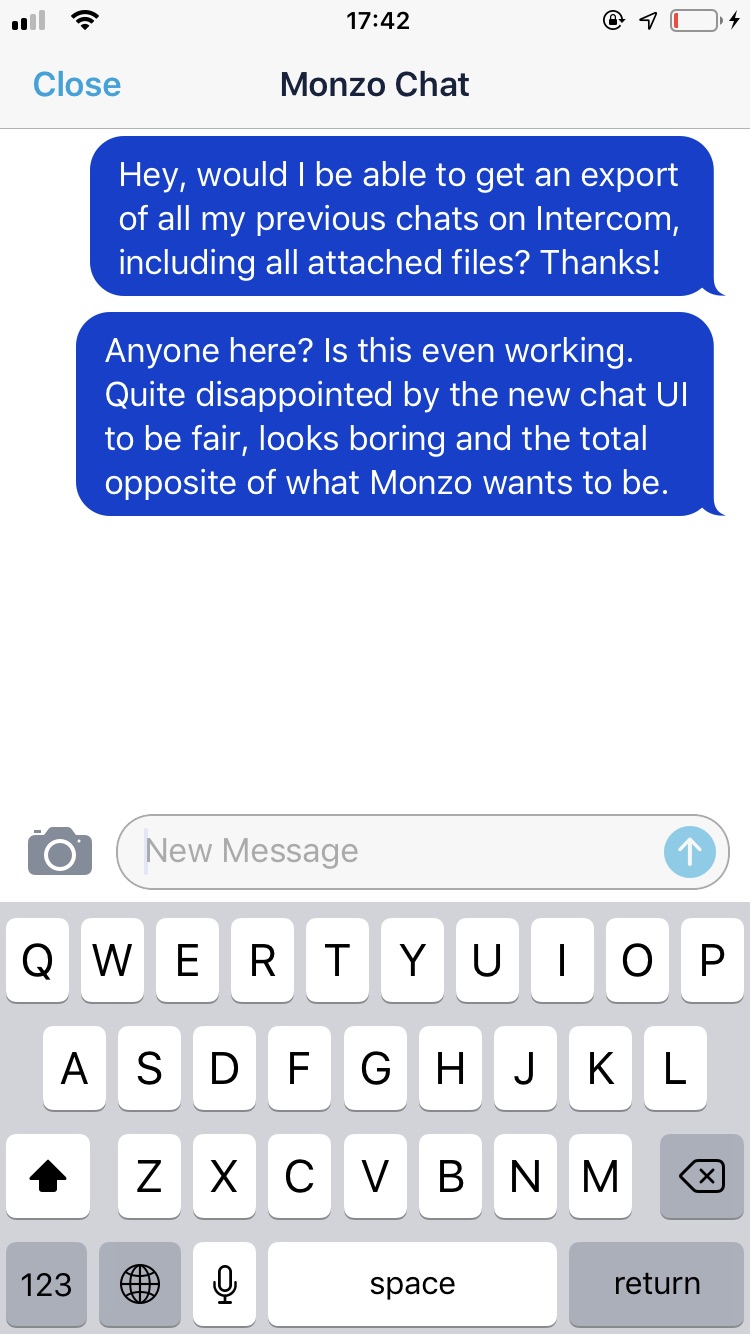 This is a really really minor point… But even the shade of blue they actually use (vs iMessage or even the blue on the blog post) is bad!

A slightly less… sharp… blue would be better (IMO).

I aced my design classes at school…

I am on new chat and as always Monzo seem to be continuing their policy of pushing half baked features and then revisit them at some time in future. Not much more to add on to what’s already said above but just want to say that Chat is the main way we get touch with Monzo and I hope they don’t stop working on improving this like they have for a couple of other features, Pulse graph is one of the main ones.