Looks like we haven’t had one of those in a while and I was starting to miss it. Thankfully, GPS kept their promise and delivered.

Revolut, Starling & Curve users have issues apparently. Curious thing for Curve, for online transactions CRV believes the transaction declined when they’ve actually authorised it, and refund the money to your backing card straight away, giving you (temporary) free money.

Have Starling admitted it yet or are they staying silent as per?

They changed the immediate status to “partially degraded” (all card payments fail & undefined Apple Pay behaviour - see Starling Feedback thread - is merely “degraded” for them) but didn’t post an actual incident item so it wouldn’t trigger any notification even if you subscribed for updates, and will not leave any history.

Nothing to do with Starling, it’s a GPS issue. My Curve is behaving weird too, and it’s been going on since last night.

You should ask Anne from Starling.

Honestly if they do that and take over their operations I would be confident they won’t be having any outages. In-house Starling tech has always been rock solid from what I can see.

More info when logging into app which would be useful on status page! Dealing with an invalid balance for a few days is also a PITA 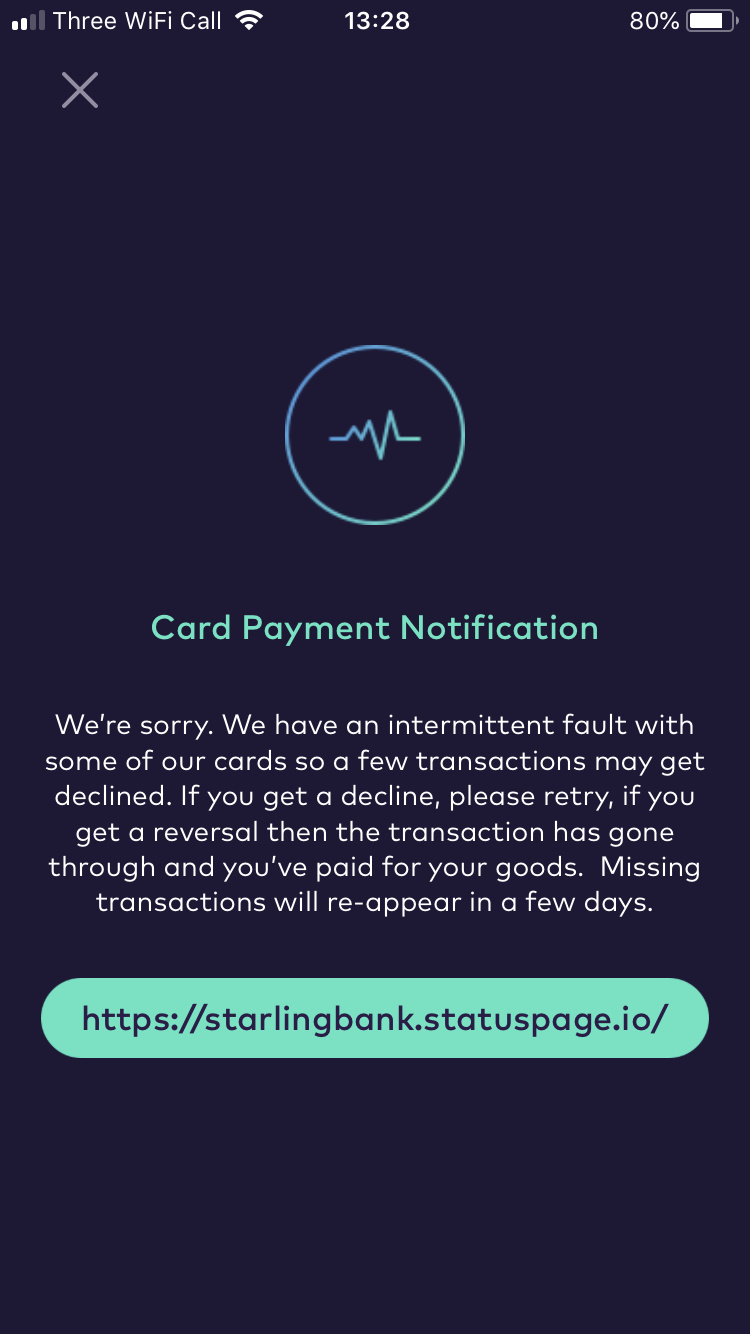 which would be useful on status page

But that will appear in the incident history and they can’t have that.

I hate how they’re downplaying the issue saying “some of our cards” and “few transactions”. Not only does it seem like a lie (all GPS cards are affected, unless they silently switched and released cards from a different processor) but for a bank they should be rock-solid and better be safe than sorry, so if they’re unsure of their ability to process payments they should just bite the bullet and recommend taking another card. Recommending to “brute force” your way at a merchant hoping it will work after a decline is ridiculous.

Good to know. Did card-present payments also get reversed like the online ones do? Seems to be causing quite a bit of confusion and I can see some people paying twice for their goods, not knowing that their first payment has actually gone through and will be presented a week later.

Mine works fine too. Spent £7 in co op. Didn’t realize there was an issue till saw message.

Resolved? Curve just worked online for me too.

No more free money I guess.

Were there not talks about Starling moving away from GPS?

Nice to see Revolut are, their post was refreshing.
Over the last 12 months, GPS has shown they aren’t reliable enough, I can understand the initial use as a startup though. Maybe they just can’t cope with the growth of the fin tech’s

who knows. Either way, they need to pull their finger out.