With the advent of the new M1 Macbooks, it is now possible to run iOS apps on the desktop. I just tried searching for Monzo on the App Store on macos; it appears that Monzo hasn’t enabled this feature, or removed it from search. But it would be great if I could download and install the Monzo app on my mac machine. It appears those who shalt not be named do enable this, though. 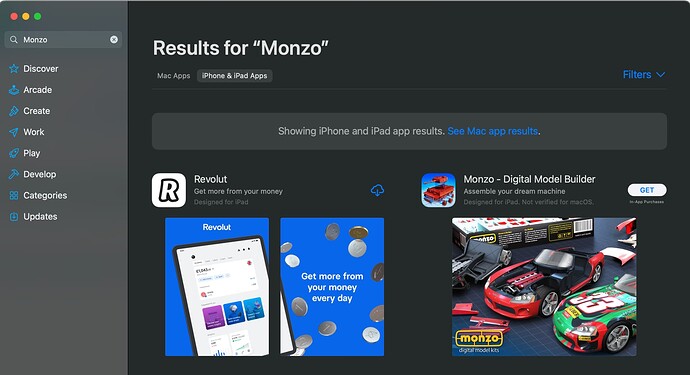 Let me know if what i’m suggesting is silly, I understand it doesn’t fit the Monzo design language well, but I have been dying for a way to interface with Monzo that isn’t phone based for a while.

Let me know if what i’m suggesting is silly

It’s not silly at all; but as Monzo don’t enable iPadOS, I think it unlikely they’ll enable MacOS.

Presumably this is a security thing? Your iOS app is tried to some tokens that explicitly identify you, and they don’t really want that on loads of devices? Especially ones you’re more likely to not be beside all the time? Sounds like the classic security-accessibility trade-off to me.

I think I have heard you can simultaneously be logged into Monzo iOS app and Monzo Android app. If that’s true, the inability to login to Monzo on two iOS devices is presumably a technical choice rather than a security-driven choice.

If true would be an edge-case though. In terms of actual numbers many more people with an iPhone would have a Mac and/or iPad that they’d log in to than would have a second phone, on Android. In that case it would be more about numbers than anything. But I still recon that there’s some device keying in the backend that they don’t want to expand for security reasons.

Yes, or at least you used to be able to do this

But I still recon that there’s some device keying in the backend that they don’t want to expand for security reasons.

I’m gonna have to go back through old emails because I’ve discussed this with a few Apple engineers and IIRC it’s related to the use a certain API which I think was something to do with location. It’s a macOS specific issue, and whilst they want all iOS apps on macOS an exception is made for these apps, but it won’t be forever. At some point Monzo will be made available on MacOS and work just the same as the phone app.

Monzo will probably still only let you be signed into one device at any given time though.

but as Monzo don’t enable iPadOS

The Monzo app is available and does work on ipadOS. It just emulates the iOS app just as macOS would once the API compatibility issue is rectified.

It’s a macOS specific issue, and whilst they want all iOS apps on macOS an exception is made for these apps, but it won’t be forever. At some point Monzo will be made available on MacOS and work just the same as the phone app.

No, developers can choose to explicitly opt-out of their iOS app being available on MacOS, and there is no indication this option will ever go away. There are apps that have a separate (paid) version on the different OSes, and for obvious reasons the developer would not want someone to be able to simply download the iOS app instead of paying for the MacOS version. Apple isn’t going to force developers to offer that, so Monzo will always be able to opt-out.

I would like to be able to run Monzo on my Mac (and I’ve voted), but with it would probably be irritating currently as that would almost certainly log me out of Monzo on my phone.

No, developers can choose to explicitly opt-out of their iOS app being available on MacOS

No indication or implication that this is a temporary feature, so I wouldn’t get your hopes up, regardless of what anyone tells you…

However, if you’re already planning to ship a macOS version of your app, or if your app doesn’t make sense on the Mac, you can change your app’s availability in App Store Connect.

so I wouldn’t get your hopes up, regardless of what anyone tells you…

Fair. Monzo’s absence is most assuredly a compatibility one though, else why would they not also opt it out of iPad.

I’m not sure you can opt out of the iPad, but I’m not a developer, so not

Don’t developers choose what models and operating versions the app is compatible, which would ultimately allow them to exclude iPads and all else if they choose?

You can opt out of iPad. Big name example of this is WhatsApp.

Is that because iPads don’t come with a sim? As you can’t use anything other than a phone number?

I recall getting an android tablet working with WhatsApp some moons ago.

Not sure why WhatsApp don’t make it available on iPad. I don’t think it’s the lack of having a phone number tied to the iPad. You’d think it’d just work like the desktop app would.

There are plenty of third party clients for it though. You could also probably get WhatsApp up and running on an iPad too if the app was available.

for an additional subscription of £3.75 a month, you heard it here 1st