✨ A deep dive into App Evolution

As promised, I’m back!

This time around I wanted to give a sneak peak into the App Evolution project through visuals.

As mentioned in my last post, this project kicked off with a phase of discovery. As a part of this, @leepethers took the research we’d done and incorporated it into some sketches of what the app could look like: 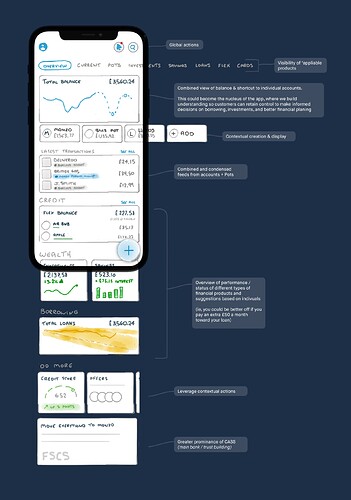 The thinking that went into this was:

From here, I built the technical demo you accidentally saw previously to understand some of the technical complexities, and @leepethers took some of his designs and made some tappable prototypes for user testing.

We had two prototypes for this first round of research — with quite different visuals! They were intentionally polarising to try and get more reaction from the customers we spoke to. 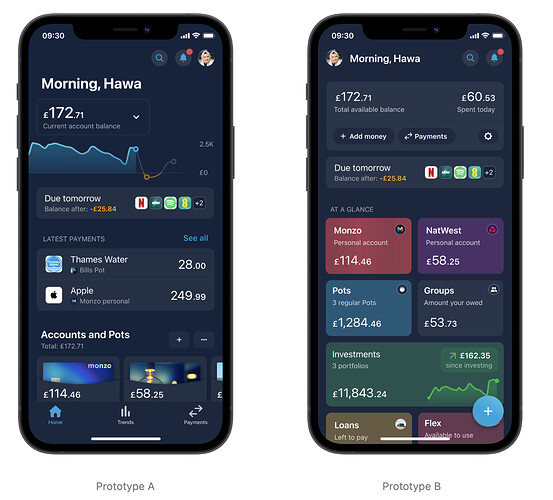 Prototype A was a data-centred financial overview. Built to pass as much contextual, relevant data as possible — to create an engaging, dynamic feed of content. To give customers a concise overview with enough data to make key decisions and know what area of their finances to focus on.

Prototype B was the opposite — limited data, requiring a tap to reveal more. A much higher level grouping of finances.

We set out to:

On the whole, customers liked Prototype A better. There was some divide, with some finding all the data on A to be overwhelming — and things like the balance graph confusing. Prototype B for most felt a bit sparse, and not rich enough to provide value.

We took this onboard, and Lee build a Prototype C for a further round of testing: 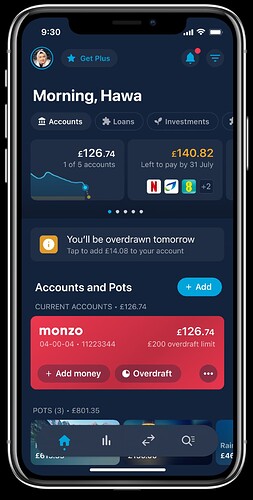 As you can see, it’s a combination of some of the visual elements (we’re calling them widgets) from A and B plus the overall data richness of A — though paired back slightly to try to not overwhelm!

We had some really positive feedback from the next round of research with it:

There remained (as always) opportunities to improve though. Mostly around continuing to balance the information — recognising that not everything can, nor should live on the overview! Plus, the ability to filter and group by accounts for foundational tasks (viewing you balance, recent spending etc) was really crucial for visibility, and any contextual actions really do need to be relevant to bring value.

At this point, you might be thinking — well that’s great, but… where are you now?

Alongside the various rounds of research, we formed the App Evolution team and started building out the technical foundations to power the Overview screen.

We’ve built towards a v1 that looks like this right now: 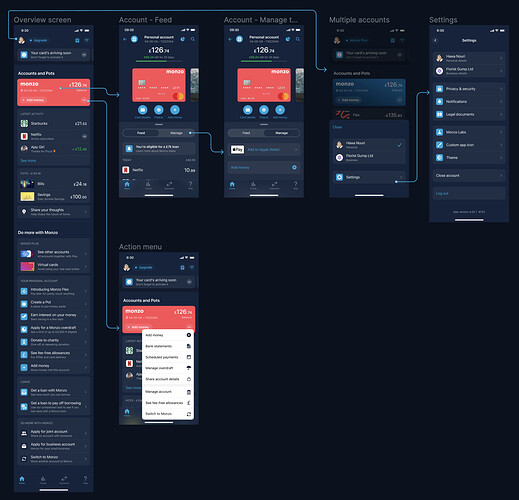 This is a very early iteration (and isn’t ready for customers yet!). Next we’re working on implementing some fundamentals and working to make the experience and content feel good enough to put in people’s hands.

We’ve released it internally to staff in the past week or so, and it’s been nice to see and get feedback on this early version. A lot of what we’ve heard so far has aligned quite well with the user research, which has felt quite comforting!

Our next goal is to have a v2 that we can put in public Labs for y’all to have a play with.

It’s great to get this sort of insight into it all, so thank you for that.

I think I prefer B to C. Are those tiles movable?

I agreed with this

as I was reading (preferring B to A), then came across C. Wow.

Any chance of testing this prior to launch to provide feedback?
(I have a very particular set of skills)

Prototype A is by far my favourite of the 3.

B doesn’t do it for me, and C is just Revolut, only looks more cluttered and misses some important information that I want to open the app and see at a glance above the fold! My recent transactions!

Prototype A looks phenomenal. Please do that one.

I think I prefer B to C

I was reading (preferring B to A), then came across C. Wow

Prototype A is by far my favourite of the 3.

@Peter_G must be asleep, else they’d be all over this thread! So I’ll do the poll.

I would go with A but swap the accounts and pots for the at a glance from B, but I’m aware at a glance will be mostly hidden. And then the floating bar at the bottom from C.

Maybe the option to remove the graph so more of at a glance is visible if a user wants.

I agree with not replicating Revolut, I find that app horrible as there is just so much going on it is overwhelming.

I really hope that whatever design is released is going to have the ability to add/remove widgets as I don’t want a screen cluttered with loads of stuff that I am not interested in (although I appreciate it may be stuff others care about). It would be nice if it took me through some sort of flow that asks me a few questions to workout what I care about most so that it can be tailored to me from the start.

Not sure if “Morning, Hawa” is the best use of prime screen space…

Not sure if “Morning, Hawa” is the best use of prime screen space…

These greetings in apps always make me cringe.

Why? What’s the purpose? Who just says Morning? I get it’s to save space but crikey (what about Hi? Or Hello? Or Howdy?). Make your font size smaller, it’s Good morning!

Or better yet. Just don’t.

And I literally say “Morning” at work and everyone I know at work just says that if we’re on a day shift.

Oh I love A,B & C. I’m currently leaning towards B but I also enjoy the data on A

You do know you can change what you see and need in Revolut? Doesn’t all need to be pow in your face.

Home page for me is balance, net worth, analytics and then recent payees.

Keeps it tidy and relevant.

Thanks for the post @emmag and the level of detail. It’s great to see.

I love A personally. I’m presuming you ran this against a control group using the current app, how was the feedback compared to that?

I know. I don’t like the design of it.

The customisation is a power user thing. Most people will never touch it.

The default needs to bring order to complexity. Not just be cluttered with the option for users to hide it.
But that doesn’t achieve the goal of good human interface design. Hiding things doesn’t achieve order, nor reduce complexity.

Revolut had a really good thing going when they began with the current UI, but it very quickly deteriorated into chaos.

Monzo’s A and B both do a really good job of it. Where A wins for me is the structure and the way the information is ordered. The hierarchy is right.

For the option C, where they tried to converge the best of the two I’d have gone with something like:

Drag and drop on the at a glance bit between accounts and pots would be awesome.

I voted C, but I must caveat that with saying that I’d like it even more if the “Morning, [name]” text was at the top instead of the ‘Get Plus’ text (so, like B). That would rescue some space back that the pots aren’t awkwardly hidden behind the bottom buttons.

It doesn’t look too different in terms of structure, and you can move them to suit how you want them (except main balance), and add and take away what you don’t need/want.

You’ve had to go in and tinker with that though to achieve that interface. I really don’t like that, and it should be the other way around if you’re going to make it customisable.

I don’t get on with Windows or Android for precisely this reason. The whole customisation solution isn’t really a solution to me and just leaves me feeling frustrated.