I love Monzo and use it as my main bank, however there is a big flaw that I don’t see documented anywhere apart from these forums.
The card is NOT accepted at the Post Office counter to withdraw cash. This left me in a difficult position in a small village in Wales where that was the only option.
I understand there’s reasons behind this, my point for this post is this should be made clearer on the website, FAQs etc.

My inclination would be to check the Post Office website if I wanted to know if I could withdraw cash from them, and they do list all the banks that work with them
https://www.postoffice.co.uk/branch-banking-services 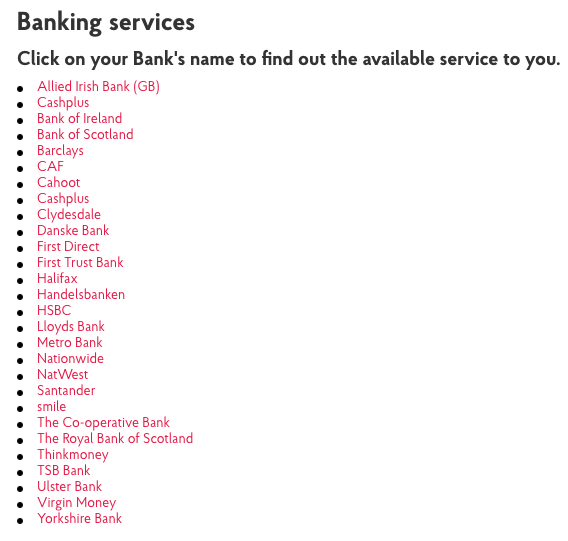 My friend got caught out at the Post Office with his Monzo card; he’d always assumed they supported all banks. I’m not too sure how Monzo could easily tell everyone without making it sound like it’s a bit of a cop-out

Yes 28 banks and electronic money institutions out of the many hundreds of banks, building societies and credit unions issuing debit cards is a very small proportion of cards actually accepted!

Personally I think the Government should renationalise the Post Office and take it out if the private sector and then make things like access to banking services open to everyone without the need for banks to pay for some expensive contact with the Post Office!

On the plus side Monzo are looking to put in place cash deposits through a third party by the end of this year.

Maybe withdrawals will also be included? But ATM’s can be used for this.

But when those 28 banks cover the majority of people who have bank accounts in the UK, you see why it might be a bit of downside of being Monzo only

EDIT: Didn’t make it clear that I was saying most people are used to being able to easily nip into the PO if needed

I have 5 different cards that don’t work at the Post Office so I discovered the hard way. Some woman suggested I withdraw from the Post Office when the one and only ATM in my town was out of order. None of the cards worked. So now I just buy a 10p pack of Haribo sweets in a shop with a card and ask for cashback.

Nice way around it haha. Mind listing the cards? Am interested

I doubt “most” people used the Post Office for getting cash, but with the number of bank branches closing I am sure it may become more common. Though with a number of Post Offices shutting recently it is much easier to find a PayPoint as they have far more outlets than the Post Office.

I avoid the post office as much as possible the main one in Glasgow city centre is just awful!

Well, I mean most people think they can go to the PO

The cards I tried were new ones like Monzo, Starling, Fire, Monese etc… Although Monese have now got arrangements in place with the Post Office for deposits so perhaps they also have withdrawals now as well?

It should be open to any card I feel. So even tourists from abroad could use their card as long as it a MasterCard or Visa for example

it’s like stepping back in time, and it doesn’t help that they’re normally shoved at the back of some rundown WHSmith.

If I can’t find an ATM nearby or I need coins I’ll try to get cashback from a shop.

But yeah, if Monzo end up using the Post Office to pay in cash they might as well use it to withdraw, too.

I avoid the post office as much as possible the main one in Glasgow city centre is just awful!

I do too, but living in cities we have lots of choice.

That’s the point I didn’t even think I had to check the Post Office website as it has always accepted any other card, I didn’t realise it was only a relationship with certain banks!
Average customers would probably not realise this either.

Exactly! I never checked until my friend said they declined his Monzo card. I’d used my HSBC card when I was U18 without thinking

Maybe withdrawals will also be included? But ATM’s can be used for this.

Hopefully withdrawals will be. If you are stuck in a town with one ATM and it breaks down and the nearest ATM is a bus ride away to another town but the bus only takes cash which you can’t get because the ATM is not working…