Where is the chat?

At the very least it’s sparked an interesting discourse, and provided some insight, and brought to light a few potential issues. And yes a bit of speculation thrown in too.

We now have a better understanding of the state of the chat button feature too, that the rollout is complete, and the change is intended to be a permanent one.

but rumours and whispers growing in momentum with each repeat are just pointless.

I get that you don’t like speculation, but it has its uses. It can raise questions, provoke thought, challenge perspectives and open your mind. Though it’s void of certainty, objectivity and fact, it’s a useful mental exercise, in my opinion.

I would say that depends on what’s being discussed. For a lot of people I think the chat changes are negative, so it will naturally gravitate towards negative speculation.

If you recall that thread from the day before plus dropped. There was a ton of positive, and excited speculation. Monzo’s community was at its best that day.

it can be informative of course , it can also be destructive, a potential issue has been raised about the possibility of Monzo being in breach of FCA rules and potentially equalities rules, if that alleged issue is not resolved it becomes yet another possibly unfounded stick to beat Monzo with - maybe on this issue they need beating …I would hope not , as a regulated UK bank, now I dont have the issue , Im not going to complain , several posters have said how much the issue affects them , one of them should officially complain and let us know the outcome from the Monzo perspective

Exactly what Ian said. Probably a better summing up than I could give.

Monzo’s community was at its best that day.

I think you’ll find the dance-off was peak Monzo Community.

I think that’s the crux of it for me.

There can absolutely be speculation over whether Monzo takes legal advice on its features. I’d find it mindbogglingly uncomputable should Monzo not be doing that.

But the fundamental is that legal advice or not, should someone think that something isn’t legal then it needs to be tested in court or by the competent authority. Otherwise I worry that we’re in the territory of making unfounded and unsubstantiated slurs.

I am, it might not always be received positively, and I’m happy people have a whole range of views.

Ultimately when @simonb mentioned a few months ago we were making difficult decisions which would make some people unhappy - this is one of those. The vast majority of people don’t have the chat button access on the help tab - they have it on relevant help pages instead. Some groups (and I don’t know what those are - but I believe one of them is customers who are classed as vulnerable for example) still have the help button.

I appreciate all the feedback about help articles and I’m happy to feedback any specific examples of help pages which people feel could do with reworking or should have the chat button which don’t.

wouldn’t Monzo have to know those customers were vulnerable ie they would have had to identify themselves to Monzo to get the " feature" ???

wouldn’t Monzo have to know those customers were vulnerable ie they would have had to identify themselves to Monzo to get the " feature" ???

That’s right, and there are several ways we can identify that and in which customers can make us aware of that themselves.

Yes, it’s a deliberate decision by Monzo to try and force customers to use its FAQ function by making in-app chat a lot harder to locate.

I think you’ve misunderstood the point I’m trying to put across. I’m fully aware that Monzo switched to hiding the chat button but for some people it seems to be back.

Quite possibly. While it’s true that a Monzo staff member said on here that it was a staggered roll out, it’s entirely possible that due to customer feedback, Monzo are reassessing whether they’ve got it right.

I’m wondering this too. When we had the whole Plus card envelope debacle I definitely had to search for ‘contact’ to be able to speak to someone and get a new card ordered.

If I go to my app today the button is back, but judging from the posts here it’s not back for everyone. I’m not sure how long it’s been there, but I noticed it earlier in the week when I needed to speak to the team.

Ive had this form in the app , and have had it for a long time , I dont think Im classed as a vulnerable customer - I think it works very well , starting at the search box " how can we help you " then scrolling down through a few FAQ screen ending up at the chat button

I appreciate all the feedback about help articles and I’m happy to feedback any specific examples of help pages which people feel could do with reworking or should have the chat button which don’t.

Personally, I feel almost all of the FAQ should have the chat option.

At the moment, there are FAQ where I can select ‘No’ to if my question was answered and instead of being offered the chat function, I’m just told ‘Thanks for the Feedback’

Just to add, when I tap the search box I also have a ‘I can’t find what I’m looking for button’. When you tap it chat opens immediately and Spotify starts playing Lionel Richie. 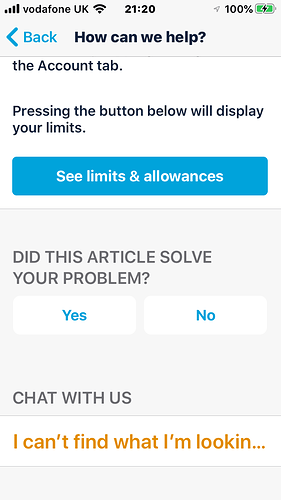 If I choose No on some FAQ all I get is 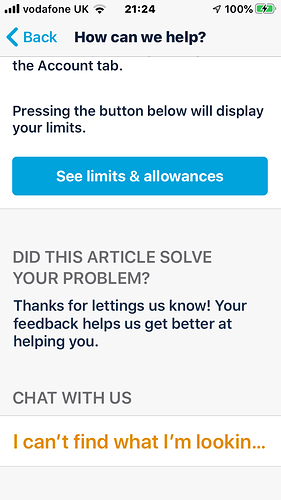 Hopefully this is more in the form of self serving tools, machine learning, and automation, with efficient human fallback where it falls short, rather than just more obfuscation of the human aspect. The human element is far too vital, and self serve functionality and automation should only augment it, not replace it, in my opinion.

No chat for me either. I asked some questions in the search, said they didn’t solve my problem and it hasn’t appeared.

And when I say no at the end, there’s no option like others get

I seem to have moved onto the “chat button exists” stream of users, not sure how, but I must have spammed the deep link often enough to make Chat pop up permantently…

I think my biggest gripe on this whole shenanigans was, at one point - and I don’t know if this is still true - the only way to get Chat if you were on the wrong “version” was to type “contact us”, which myself and many did not find an intuitive thing to search.

Can’t say if that’s the case but that, at one point, was the ‘worst’ of this.

we are going to do things users don’t like,

Hopefully the next phase of this will come pretty quickly - that is making the search tools / FAQs a bit more intuitive, as I think that’s the first hurdle that fail for a lot of topics.