PUBG VS Fortnite - Which is better?

I have played neither. Should I? Which one?

Forbes seems to think the latter is the way to go.

I’ve only played Fortnite, I’m absolutely rubbish at it

I haven’t played Fortnite, but the whole building thing seems quite manic to me. I dunno. I like PUBGs slow build to the dead panic of the end game. Certainly gives you a rush when you are in the final 10.

Fortnite fascinates me as originally it was tower defence game. Check out the 2017 E3 trailer https://www.youtube.com/watch?v=OiG8DuoHVVk

Halfway through development they looked at what was popular and decided to make a pubg variant… it went viral and they made millions out of it. The other version sunk without trace.

I can understand why people like Fortnite over PUBG but I still prefer PUBG.

Pubg all the way

Got it a week after launch (

wish I had known about it prior to that! Would’ve had the legendary (and expensive

Had a couple hundred hrs playtime so far, plus any time spent in the test server!

Got a gun, some boots and a backpack. Then somebody knocked me out with a go kart, tooted their horn and drove off, followed by somebody shooting me while I’m down

Not a good day.

Then somebody knocked me out with a go kart, tooted their horn and drove off, followed by somebody shooting me while I’m down

Downloaded and played some PUBG on my Pixel 2 XL.

Feels like this isn’t really a game to be played on a touchscreen.

Still! I got into the last 30 people of the group of 100, shot one guy and ran another one over. So that was fun.

If I decide to play it properly then I’ll get it on Steam or whatever. A PS4 version would be nice.

At times it feels like a running simulator, no vehicles nearby and the zone is the opposite end of the map

Even on mobile? The usernames didn’t seem very botlike

One major difference from the other versions is the presence of bots, apparently designed to help new players get to grips with the game. As you level up, the ratio of real players to bots increases, and it’s easy to tell the difference — the bots are pretty dumb and don’t put up much of a fight.

PUBG on the xbox hasn’t been without issues, but the developers are listening and constantly rolling out updates to address the problems. But it’s a great game, very addictive and it’s interesting to check out my fitbit’s heart rate report after a game!

It was not a bot that tooted his horn at me!

Yeah, I feel like there’s probably an even mix of bots and other new players in the first few matches on mobile.

This might convince me to give Fortnite another go. 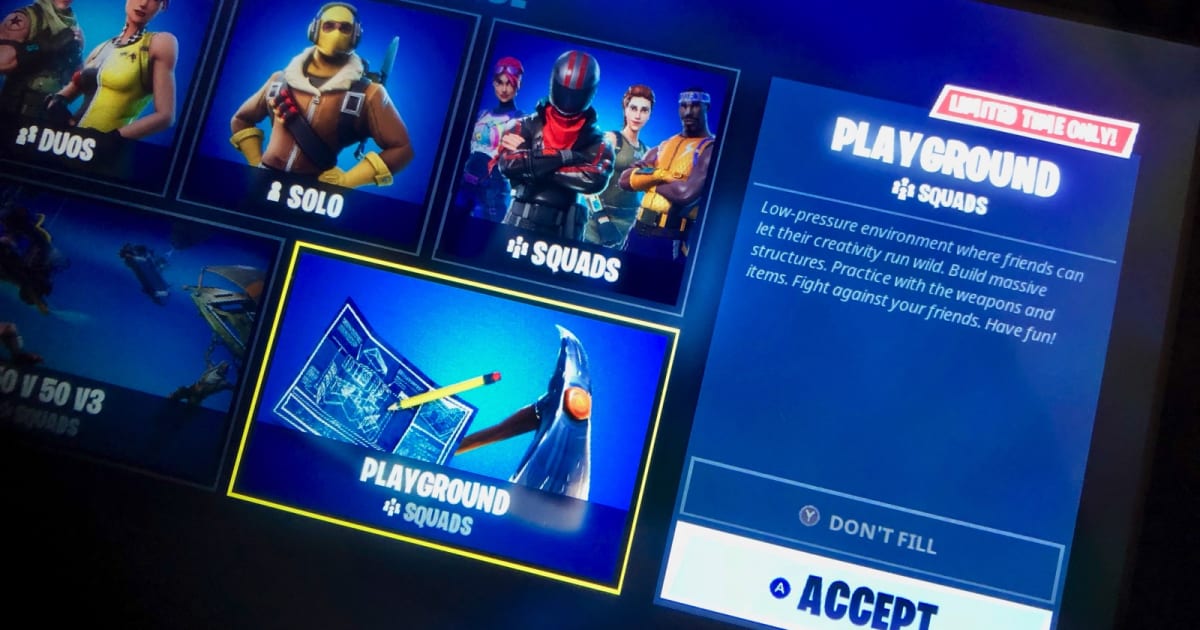 Playground mode is now ready to host up to four players to practice their 'Fortnite' skills.

Hopefully games like these will force Sony to reconsider its draconian stance on cross play!! http://uk.ign.com/articles/2018/07/02/sonys-stubborn-stance-on-cross-play-is-embarrassing

Personally I have played both and I am terrible at both! I do like PUBG slightly more though! I don’t really understand the point of it on mobile, I find control is far too slow when you’re playing against console and pc users.