See the attached photo
In my monzo it says that some people are having payment problems . Have these been resolved ? 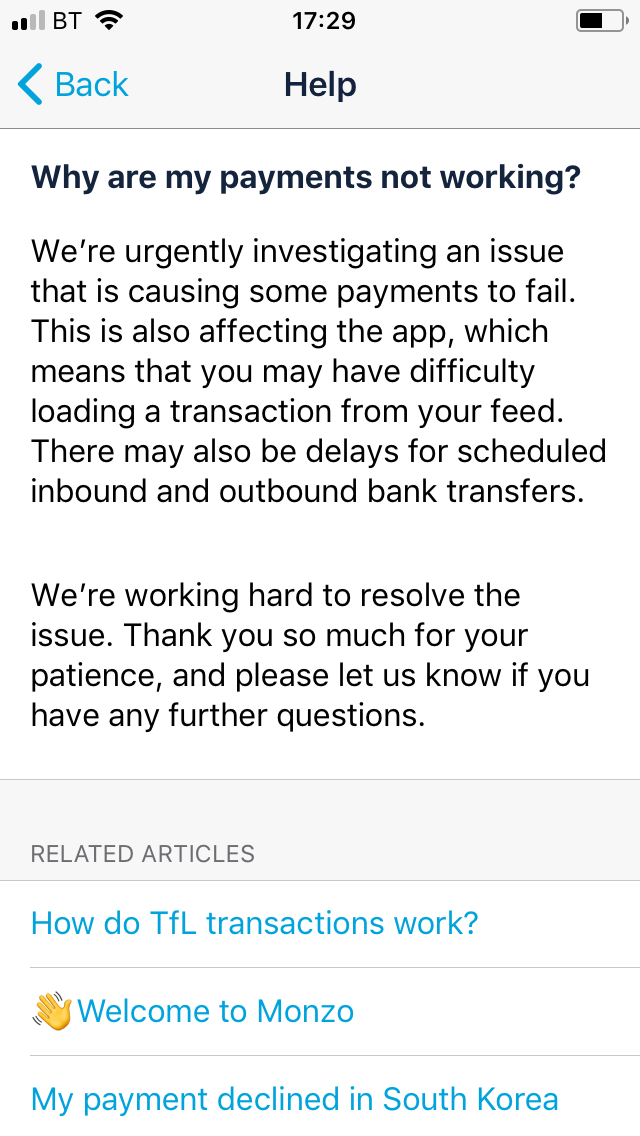 I used my card earlier and it was fine so you shouldn’t have an issue but if you do just wait a bit and if it persists talk to the team in-app.

you could sign up to free updates by SMS here

the issue today occurred at 09.17 has been resolved at 11.44 today according to my notifications

Yes they have, they put that there was they had issues for only a few mins this morning.

The help feature auto suggests answers and articles for oh based on what’s currently going on along with your usage.

Yeah they had problems earlier today which has lead to apparently Sainsbury’s taking money twice from my account.

Monzo have reversed one of the authorisations straight away but have said that if they do present the payment twice it’s my job to get the money back from Sainsbury’s even though it’s Monzo’s fault which I thought was a bit pants to be honest.

My feed didn’t update for quite a while either.

Sainsbury presenting twice wouldn’t be Monzo’s fault.
“Presenting” is when the merchant sends Monzo a file of transactions they expect Monzo to honour.
Banks can’t decline presentments that follow a valid authorisation. The double-auth could have been the acquirer’s (or merchant’s) fault too, which is why I suspect the COps agent informed you about the possibility of the second charge still being presented. It’s the same reason why TfL (or similar transactions) can take your account balance below zero, even if you don’t have an overdraft.

I think the transaction appearing twice is entirely due to the issues Monzo were having at the time.

They haven’t presented twice (yet).

You’re probably on the safe side then, since if it was a Monzo issue, the merchant / acquirer would only know about one transaction - so would only send one presentment to Monzo.

Monzo have reversed one of the authorisations straight away but have said that if they do present the payment twice it’s my job to get the money back from Sainsbury’s even though it’s Monzo’s fault which I thought was a bit pants to be honest.

It’s a little bit of a weird one, but basically the Sainsbury’s system will see both authorisations, and then do it’s own check to see if two separate transactions were definitely made.

If they then made a double presentment, that is effectively Sainsbury’s saying
“Yes, we can confirm that this customer made two separate payments”.

It’s unlikely that it will present twice. If it does, and for whatever reason Sainsbury’s also wrongly believe there were two transactions, we’ll credit you back for that, so please don’t worry!

Double charging has happened to me couple of times but always at Tesco. Monzo COps refunded extra transections instantly and same as @Chalky did warn but I have never had payment taken again.

I think as @simonb said their internal checks can see if there were really two different transactions or just one was charged twice.

4 posts were merged into an existing topic: Pay at the pump - Payment amount issue