In HSBC online banking, I can lookup common Payees, ie if I want to pay my Amex bill via bank transfer from Monzo account (rather than by Monzo card - which has to be done via Amex’s crappy website).

It’d be great if this feature was available in Monzo.

Here’s a screenshot from HSBC - 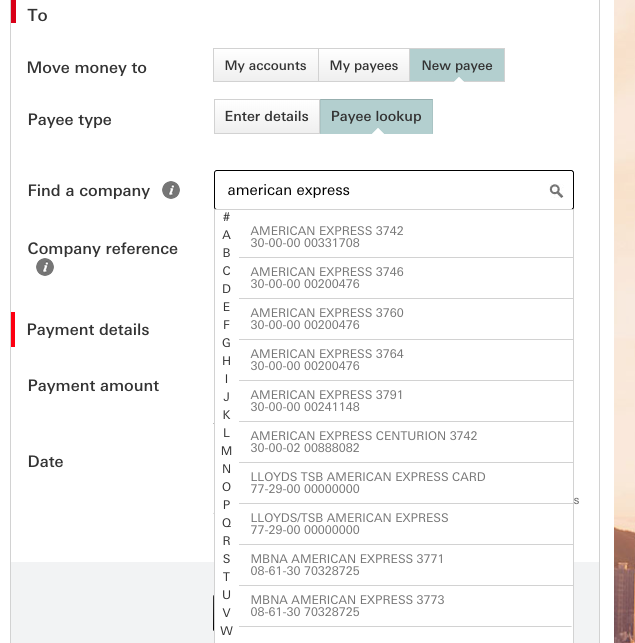 Once I made my payment with Monzo, it had the generic Payee icon of initials of the payee. Monzo could more richly integrate this with correct icons and spending/budget categories etc. ie If paying an electricity supplier, not only show that electricity supplier’s icon, but automatically categorise it as Bills/Utilities.

Edit: Oh, and it needs to save the reference - in the case of Amex, by credit card number, in electricity company it would be my customer number. Otherwise, when I use it again from recent payees, I need to re-enter the reference number - if I forget, or set my own personal reference, it will not pay off my account with the vendor.

It’s a cool idea but there has to be a better way at doing it than whatever that HSBC screenshot is.

I’ve never liked those tbh: I don’t know how accurate/up to date they are (especially when the bank doesn’t show the sortcode/account number) and by the time you’ve scrolled down (say) the ‘MBNA For accounts starting 3771… For accounts starting 3772… 3773… etc etc’) list, it’s probably been quicker to either cut’n’paste or type the 14 digits of the sort code and account number.

It’ll be quite nice if there could be ‘reverse lookup’ type thing (‘Sort code 30-00-00 that’s XYZ Bank, Townsville’/account xxxxx at that sort code is known to be ‘American Express Centurion’) just as additional validation [might even help reduce fraudulent transfers of the sort 'Oh - you need to transfer money to your new XYZ account…But that’s coming up with a Natwest account marked ‘Individual (Personal)’… etc).

That suggestion is already miles better than the HSBC example.

I also don’t get why there are multiple entries with exactly the same sort code and account numbers?

I also don’t get why there are multiple entries with exactly the same sort code and account numbers?

I agree, Richards suggestion would be brilliant, any additional validation when it comes to moving money about is welcome to my eyes.

Yes - of course looking for something better than the way HSBC handles this. Obviously, technically, right now, HSBC are handling this better than Monzo as Monzo is not handling it at all (especially as you can’t permanently save payees).

Amex is probably a bad example, as they have different accounts for different card schemes. Although, I agree, in my screenshot, there are lot with the same account numbers, that’s pretty silly. Utility providers are more straight forward, there’s generally only one account.

Nice to have - validation on the reference number, ie if paying Amex, check it’s an Amex credit card number, if paying EDF, make sure it looks like an EDF customer number etc. Won’t guarantee mistake free, but could save you from making silly mistakes.

You can look up a previous transaction that you had with a particular bank account then you can send money to that account (it shows sort code and account number too). Once you go into the payment screen and click in “Reference or message” some recent messages are shown (I can’t tell you how many as I haven’t used enough for anyone to reach a limit yet).

I know that this isn’t exactly saved payees but I use it quite a lot for people that I pay very infrequently.

Yeh, I did notice you can click on the previous reference/message, but I almost accidentally sent money to Amex with no reference.

The problem with recent payees is they get bumped when they’re not so recent. Anyhoo, that’s crossing over into Is it possible to permanently save payee bank details?

In other banking apps I’ve noticed a section when paying someone/company by a bank transfer that there is a pre-built list of organisations. Selecting an organisation then fills in the account number and sort code for the company. This has been useful in the past as finding these details for different companies isn’t always easy. Also helps give a bit of piece of mind I’ve not made a typo

I’ve never really seen a massive advantage in those lists to be honest. I probably had a bad experience the last time I used one though - I searched the company name and it showed something like 10 options which didn’t really help.

It could be useful if Monzo had a way of labelling sort code and account numbers when typed in to add confirmation though. So, you type in the details for you credit card repayment and it pops up with a tag: ‘Halifax - Credit Card Payments (?)’.

Love the idea of the confirmation, perhaps also one you’ve entered enough of the account number you get a small list of possibilities to choose from instead of having to type the rest?

I have found them really useful in the past, I suspect they a pain for the bank to setup in the first instance but I for one would be in favour, and have voted for this.

I used to work for a high street bank, within Internet Banking and can say that it is an utter pain in the neck for the bank to keep atop the information.

You would think that payment information such as bank account numbers and sort codes for utility company payments (and other organisation) rarely change but it might surprise you a fair few companies do shift them about.

There was a huge resource put into this and, despite best efforts, sometimes the bank information was wrong and a customer would be recompensed for the banks error in having incorrect information for their bill payment.

Just my tuppence worth that there is indeed a large resource required to keep this particular ship steady.

I never used the list with Nationwide as it made me nervous that the payment would somehow go to the wrong account for what I was paying (as big organisations have multiple accounts) or that details weren’t up to date. So even if an organisation was listed in the pre-built list, I’d always enter the details I’d been sent manually to ensure it went to the right place. Interesting to read that I wasn’t being unnecessarily paranoid!

When making bill payments for many high street banks on their mobile app, you just have to write the name of the company you are paying and they find the sort code and account number for you. It would be nice if Monzo could do the same!

I’ve never like that feature personally. It’s always worried me that my bank might have the wrong details, although I’m pretty sure they’re always updated.

It would definitely be a good feature to introduce though. Every other bank I’ve been with has had it.

This has been discussed a couple of times before, and in one thread @prwist gave his insight from working with a high street bank (and it seems that the accuracy of stored bank details is indeed the issue):

It’s not a long thread, so you can read the other comments as well. There was also discussion of this feature even further back in this thread:

In HSBC online banking, I can lookup common Payees, ie if I want to pay my Amex bill via bank transfer from Monzo account (rather than by Monzo card - which has to be done via Amex’s crappy website). It’d be great if this feature was available in Monzo. Here’s a screenshot from HSBC - [34] Once I made my payment with Monzo, it had the generic Payee icon of initials of the payee. Monzo could more richly integrate this with correct icons and spending/budget categories etc. ie If paying an elec…

I don’t know if it’s possible for one of the Coral Crew to somehow merge all of this so it’s in one place. Might be too late now!

In this case, it actually all merges quite well. So I’ve merged it.