When receiving a partial refund on flex, Flex should automatically balance out the rest of the payments required.

E.g you pay £299 over flex and get back an £85 refund. The remaining two required payments should be £57 each.

Rather than the current process which leaves one payment being £100 and another being £14. 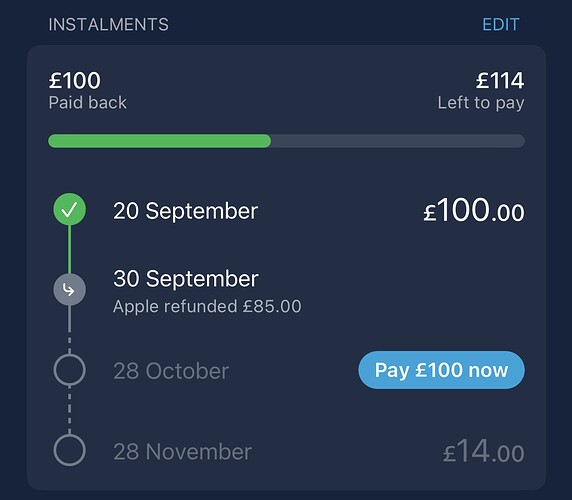 This is how Flex works and the reasoning was explained in another topic which someone can hopefully find.

The same applies if you make an overpayment, it removes it from the last payment. It explains this a little further down in your screenshot.

Yeah this always felt a bit archaic to me. It would be much better if rebalance the rest of the payments. It’s more affordable for the customer that way.

I’m sure a few folks on her have complained in the past that they tried to pay a bit extra to make the installments cheaper, but wound up in difficulty because if only reduced the third installments whilst the second ones remained high, and those extra payments meant they didn’t have enough left to cover those high payments.

PayPal does the same thing too when you go with installments. Even more frustrating there, because it interferes with the 4 month offers, prioritising subtracting money off the end of your installments rather than paying off the interest free offer that’s about to end, so perhaps this is just the normal way of doing BNPL. Proper screwed with my account though, and the way I’d planned to pay, which meant everything which was supposed to be interest free wound up charging me interest for 4 months.

Not a huge fan of it though. Early payments should allocate the money in a way that’s best for the customer to avoid paying interest, not what’s more likely to invoke interest charges.

The new pay early seems to rectify this to some degree, by taking it off the upcoming payment instead.