So basically me and my partner have picked a set of movies each (15 from me and 16 from her) which we placed in a glass pumpkin and then we pull out a ticket to decide what we’re watching that night. 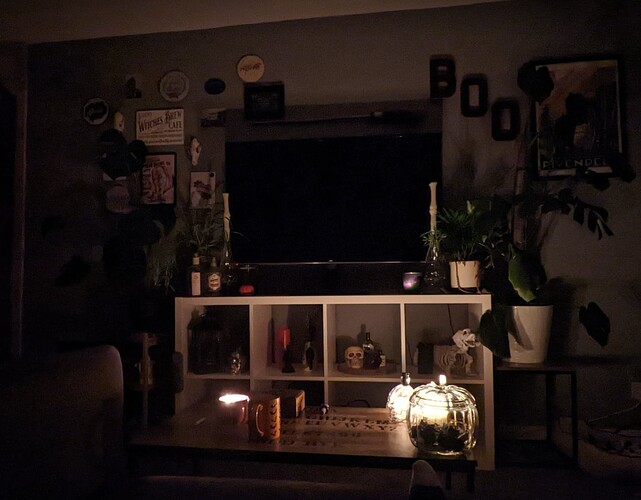 So far we’ve had:

Anyone else been hitting up the Halloween films?

This is my idea of hell! Thriller I can deal with, but not horror or jumps.

But I like the idea of movies in a pot and pick one out. Saves the scrolling on Netflix, switching to Prime, switching to Disney etc etc.

out of myself on the regular.

I pure struggle with have every TV show and film available to me so the pulling the names out the hat/glass pumpkin was a big win for me.

@Revels Do you do any Halloween viewing?

@Revels Do you do any Halloween viewing?

Not if I can help it!

My housemate has persuaded me that we need to watch a scary movie as it’s Halloween month. I do not care for such films, they make me very anxious (I struggle just to go to the laundry room in the cellar if I’m here on my own!) but I’ve agreed just to test myself. I guess that means I’m going to be staying awake all night with the lights on…

My Halloween viewing is usually the Rocky Horror Picture Show. Like @Revels I can’t deal with jump scares

Are any of the Annalise on your to watch list?

Sleepy Hollow isn’t on there

That’s my go to for Halloween

Fantasy is every bit as Halloween as Horror tbh. I can enjoy a good horror but I have to be in the right mind, and I’d sooner a good thriller.

But we dress up as fantasy characters too! Especially the villains! So I’d sooner watch Maleficent!

The school of good and evil looks really good on Netflix from what I’ve seen. CGI is a bit crap (about on par with the Disney plus marvel shows) but I’m gonna subscribe for a month to watch that this month.

The Disney Halloween specific movies are always a good watch too!

Sleepy Hollow isn’t on there

That’s my go to for Halloween

No Sleepy Hollow either! Such a belter - it’s hard to cut it down to 31 films

No Psycho either! Everyone is putting me to shame here haha.

Think Halloween is the oldest out of the selected films

I love the conjuring films! Still need to see the newest one!

I knew 31 films would be too ambitious, especially with also watching some great telly, so the goal I set myself was roughly one a week, at least five for the month. So far I’ve managed:

Plan is for Candyman (2021) to be next, and haven’t decided what the last one will be yet. Between discs and streaming, I’ve plenty to choose from. Only restriction being I wouldn’t want to watch something I’ve already seen before.

Have I hit anything on your own list, @AlanDoe?

I watched Conjuring 2 the other night. Then Sinister I believe.

Psycho is the best film. Ever. If you haven’t seen it, watch it in the dark.

I’ve only seen the Van Sant Psycho myself

Then The Cabin in the Woods for the ‘WTF is this really about?’ moment.

Nightmare on Elm Street films good too, although watch them in order.