Got it working again

Don’t know if all these steps were necessary, but I reset the Monzo session in settings, deleted the app, switched phone off and back on, reinstalled app from the App Store, and it’s working again

Annoyingly, deleting and reinstalling has made me lose the dark mode options in settings

so not quite back to normal. 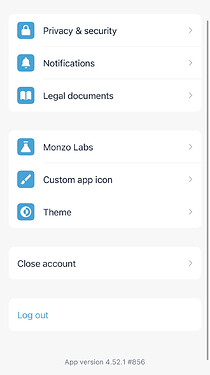 Dark mode settings has its own issue. Not sure if it’s a bug or intended given it was the same to activate it during beta (but it does feel like a bug). To get dark mode settings you need to quit the app and relaunch it after you first set it up.

Ah! 4.40 crashed! Had to reinstall but the build isn’t available, gone through a few TestFlight builds, the latest one worked, but it broke Trends! It doesn’t update update, and trying to save different accounts/pots selections just stays loading forever. Trying to troubleshoot that broke the build, and now it won’t work.

When I try others I’m getting this weird flash of a broken version of the new logo before it shows the old one, then it crashes.

Have Monzo made any progress with this bug yet?

Ah! 4.40 crashed! Had to reinstall but the build isn’t available, gone through a few TestFlight builds, the latest one worked, but it broke Trends! It doesn’t update update, and trying to save different accounts/pots selections just stays loading forever.

I have the same issue in Trends where trying to save different accounts/pots selections just spins round and round forever when you click done.

Thanks for confirming that’s not just me!

Made a thread for it here:

Issue: Trying to save your selection of pots and accounts in trends results in a constant spinning loading icon on the blue button and never saves. Details to reproduce: open the app, go to the trends tab, tap on the arrow at the top of the page to select your accounts and pots. Select some, or deselect some that aren’t already selected/deselected and tap the blue button to save selection. OS: iOS 16.1 Device: iPhone 14 Pro App Version: 4.53.0 and 4.54.1 Screenshots: Didnt take any, so will…

Since iOS16 has graced us with it presence I’ve had to on average of 3-4 times a week delete the app, reboot the phone and download it again. The app constantly crashes out and l have never had this issue with any of the other versions of iOS.

It’s becoming quite a pain. Tell tail signs that I’m going to have to do it.

I have put up with it since it came out and I’ve gotten so fed up I did a clean install of my phone yesterday again. Last time prior to that was 5 weeks ago.

Is this something that other people are experiencing. Someone at my work showed me logs of where the iOS can see this happening.

Don’t know what more I can do.

There’s a few threads about it, Monzo are aware and investigating.

I totally agree with you. It’s such a pain that am considering using a more reliable bank.

This has been going on for a very long while now and still not fixed.

I was happy to download the updated app this week thinking it’s now fixed, but to my disappointment it’s still happening.

Monzo has not updated us on the cause of this issue.

It’s not been that long! Only a few months, not that that makes it any more okay! I was one of the first victims to report the issue online, and was the first to do so here. I did some digging not too long ago to try to figure which version in particular it was that broke the app. It seems to coincide closely with when the summer cards were added to the app going from reports which started to crop up a week or two before my app crashed for the first time.

@AlanDoe it might be helpful to clean up and merge a bunch of the duplicate threads on this issue to save repeating all the really helpful troubleshooting and temporary fix methods folks have already found and shared.