Monzo app "appears to be infected"

I just got this warning on my phone and I’m not sure what to do. I uninstalled the app and reinstalled it - same warning message.

I use Avast antivirus and it hasn’t found any other threats on my phone.

What phone are you using? Where did you install it from?

I don’t use antivirus - I’m on iOS - but no one else has reported this at all.

If you’re download the official app then it won’t be infected.

More likely your “anti-virus” is recording a false positive.

I’ve had the app installed for over a year and no issues. It was installed from the official Google Play Store.

It’s not just the antivirus, the notification at the bottom is a system one.

Huawei P20 Pro. Downloaded the app from Play Store over a year ago.

Managed to get in touch with customer support. They are aware of the issue and devs are looking into what is causing the notification to appear however, the app is safe to use.

Through to in-app chat, connected to someone and issue logged & confirmed in less than 23 minutes?

What? They literally said that they did in the message.

Husband getting the same on a P20 (not Pro) - sitting tight for now since they’re already working on it, but thought I’d post.

He has no specific security software e.g. no Avast, but getting the system notification.

Seems likely to be a Huawei issue then? But something Avast is spotting too…

Thanks for flagging this with us via support

Our current understanding is that this is an issue with Avast and AVG on Android, rather than the Monzo app itself. These can sometimes come pre-installed on certain devices (we’re mostly seeing Huawei devices).

We’re investigating and working with the team at Avast to get to the bottom of this as quickly as possible, and you should hopefully see a fix very soon. In the meantime, if you installed the Monzo app from the official Google Play Store then you can continue using the app as normal.

I’m keeping an eye on this thread so let us know if you see any changes, especially if you see the issue resolved on your device.

Thanks Priyesh - I’ve had my husband check and he definitely doesn’t have an AVG or Avast app installed and visible. Obviously though that doesn’t mean that Huawei isn’t using their services in the background somewhere for their own security features.

Will let you know if the issue stops on his phone, and feel free to tag with any specific questions, I’d be happy to give more info.

Interesting, thanks for sharing your experience. Does the device have a built in virus scanner by any chance? Maybe under Phone Manager > Virus Scan. If it does, I’d be interested to hear if there is any mention of Avast, perhaps buried in the terms and conditions.

He says that all he can see under Security in the settings is a Google Play Protect option, which doesn’t seem to be flagging any issues, and a quick dig didn’t show anything obvious on the user end. Having searched a bit more it does seem like Emui OS does have some kind of integrated security which is “powered by Avast”.

People on Reddit also noted Starling app has had the same issue with huawei phones so definitely a antivirus issue not an bank app issue. 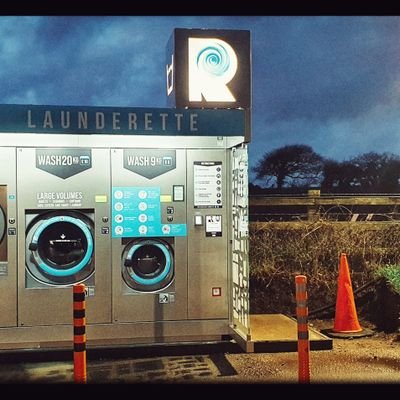 @ipb
What the hell did BBC put in their news app? https://t.co/DcJLDQuw1s 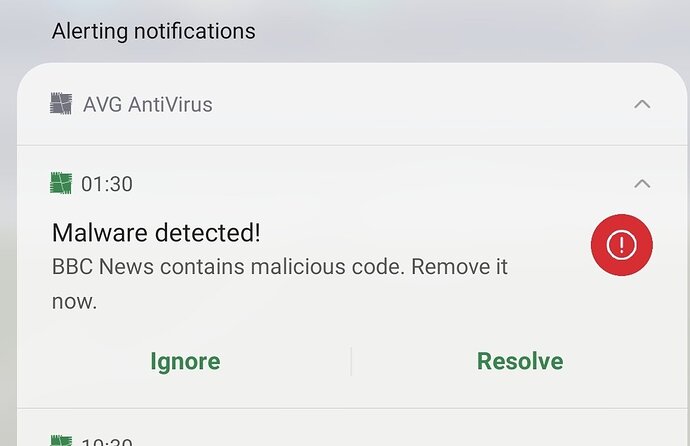 AVG are having a totally normal one then!

you should hopefully see a fix very soon

A quick update: this was fully fixed by Avast over the weekend so these warnings should be gone now.

That’s about right for the BBC though, their news is Malware

What was the cause?

Application installed from Google Play Store some months ago.