Voxi if vodafone is good in your area - unlimited social media and video apps on the £15 - 15gb bundle which is also 5g enabled on this plan upwards. Also has mms included.

I am with Three direct (£12pm for 6m and then £24pm for 6m for unlimited everything) and they just completed their network upgrade in my area and I get a good 60mbps on average most days with no signal issues, so Smarty should be similar (reportedly only gets 60% of the network according to my local Three store rep).

Both come with unlimited calls and texts.

As for To The Moon Mobile - they have a good offer at the moment which is top up £10, provide ID to confirm who you are and get up to £100 credit which would pay the next 10 months.

However, I ordered their sim on the 500mb free data offering and the speeds are poor (30mbps) compared to EE which gives 250mbps on sim only, and then BT giving 150mbps.

Reviving this thread to share some recent Sky mobile news. 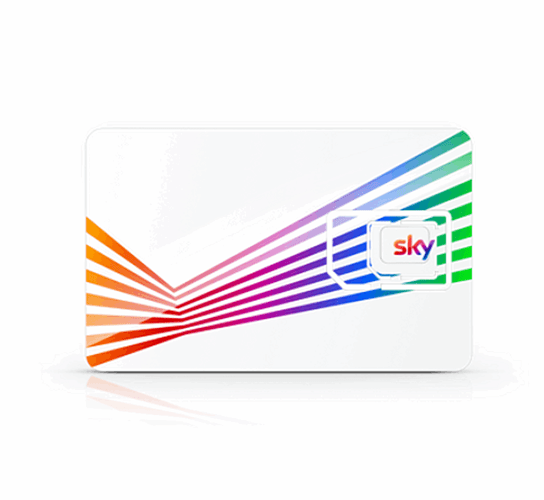 Sky (Sky Broadband) has this week added a temporary new feature to their 4G and 5G powered Sky Mobile plans, which enables customers with lots of spare

I think this is fantastic. Great if you have a lot of data in your piggy bank and have a few poorly connected family members that could make use of of it during this climate. It’s free for a year, but personally I’d hope, and like to see them keep this idea around for free, especially if you already have a sim. The benefits extend beyond the pandemic IMO.

There’s some other neat use cases for this too. Broadband redundancy. Cellular backup is nice to have, and if your router supports it, having a free SIM card available that you can bulk a load of data onto in a pinch for free is fantastic.

In other news, Sky are devious masters at up selling me onto higher tariffs. When I started with them when they first launched, I think I payed £5 for 500MB, then upgraded to 1GB for £6, then each Christmas they would bring this £6 plan back with an extra gig so I’d sidegrade for more data at no extra cost. And then we got 10GB for £10, which got me to move from my £6 plan. This plan is back in the pool and I think is a fantastic offer for what you get.

There are now other excellent plans, and I’m once again tempted to upgrade to 20GB for £12. I also get double data for free with my iPhone, and a 10% loyalty discount for poor customer service experience recently. So for me, we’re talking 40GB for £10.80 per month vs 20GB for £9.

Here’s a screenshot of the current offers: 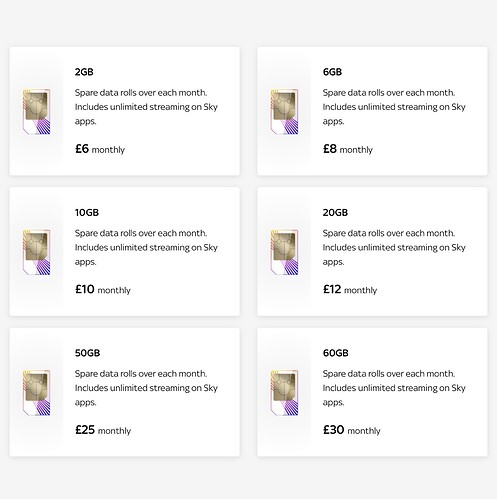 They are good deals!

I mean, I don’t need it. I’m just hoarding the stuff like it’s toilet roll… just in case… 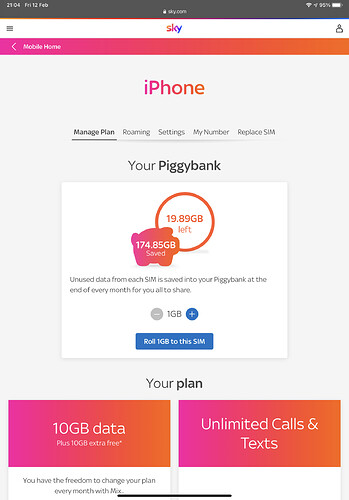 Moved to Plusnet over Christmas. They use EE so coverage and speeds have been great. Currently paying £8 of 8GB.

I recently moved house and it took two weeks to get the broadband connected, thankfully I have an unlimited data plan… 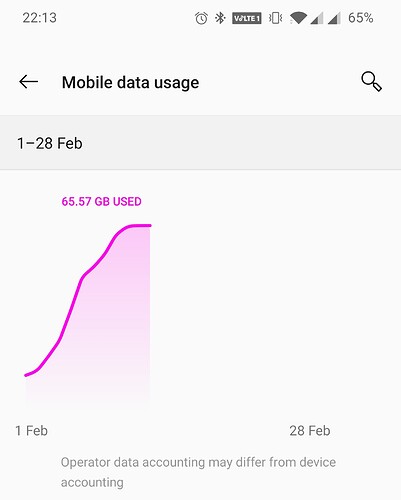 It is with Three though and to be honest I’m not overly impressed with their coverage or speeds. Would be tempted to switch to EE

Unless you got the same handset deal I did with the new iPhone last year, it doesn’t exist! For me, the 20GB plan becomes 40GB.

To The Moon mobile still do not have eSIMS or 5G access, yet. but they said it was coming

I don’t really see their appeal to be honest. Seems really poor value when compared with the big providers

They at least for me, they’re promising FREE roaming, where as other providers will either be charging £2 a day after Jan 2022 or it’ll be a very expensive plan if they offer it for free.

EE will charge £2 a day
Vodafone will as well
o2 already do (least the last time I went away, they charged my mum £2 a day to use her data)

The staff at TTM said even after next year, they will not charge a roaming fee, but I guess we shall see

Oh yeah and they brought on a ‘unique’ feature that no one else to my knowledge is doing, you can get to a human via WhatsApp

Ah, makes sense. I don’t think the roaming situation is that bad (yet) – and depending on who the underlying carrier is for TTM, and how much they’ll charge, I’ll be curious to see how long they’ll eat the costs

Speaking of eSIMs though – we’ve had them for years now and yet it’s so complicated to swap phones if you have an eSIM. I will be upgrading to the next iPhone and I’d have to:

Why hasn’t this mess been simplified yet? Do people not swap phones often enough?

Granted it is not as simple as it should be, you sim should sync with your iCloud or something

Sadly mobile providers need to support that feature, and it doesn’t really work even in America, let alone in the UK where you need to wait for a piece of paper in the post “for security”. I had a look at O2, and they specifically say you can’t transfer it “for security”

That really is a load of bull

EE allow it online. What I dont know is how to activate the phone without a sim.
Also what happens if you disable the old phone and then don’t have a new phone so you just have a mobile plan with no sim allocated?
I might upgrade this year. If I do I’ll try and report back unless reliving it is too much for my sanity….

I saw on their community that you may still need to transfer the number, but if not, I’ll be switching to them! When do you plan to upgrade? My contract renewal is in November

If I do when the new iPhone comes out. Rumours are that they are dropping the mini after this year so might do an immediate upgrade. But not decided yet!

I’d probably get last years, a 12 Mini if you want one, it’ll probably be the same as the 13 mini anyway