Leave the default payment reference blank (not 'Sent from Monzo')

I’ve just set up a scheduled payment to overpay my credit card and Monzo, by default, puts ‘Sent from Monzo’ as the reference. I’ve inadvertently accepted that, instead of putting my credit card number in to ensure that the overpayment gets credited to my account.

Obviously, I’m annoyed that I’ve now got to sort this out, but wouldn’t it be pertinent to leave the field blank, and even have a pop up if you leave it blank to ensure that a reference is then added by the user instead of Monzo pre populating it with something that, in all honesty, is entirely useless as a piece of data to reference from.

The reason why “sent from Monzo” is the default for new payments is so that the user is made aware that there is a reference field to be entered; this was done because people were forgetting to put a reference in at all. The idea is that this is more visible and jarring to the user and will encourage them to change it. References are not mandatory, so starting with it blank and forcing the user to put something there was a non-starter.

In the case of one-off payments, this is populated with the last used reference used (I think) automatically.

I disagree with that.

I’ve attached a screengrab from the Halifax app and it’s such a clearer intention that something needs to be put in to the field. The Monzo app, having it pre-populated tells the user that there’s nothing that needs to be filled in… as it’s already done. It’s not creating a call to action, where as the Halifax one is, and reiterating that you need to confirm the reference too.

Unless, I’m interpreting the last point incorrectly, why would a new one off payment be pre-populated with something that’s been previously used? It has no relevance to that new payment IMO.

It’s poor UX from Monzo in regards to pre-populating fields. I don’t agree that it’s more visible and jarring for a user as a pre-populated field means that you won’t look over it.

For the sake of being told to add a reference, and even confirming it like the Halifax app, means that it can save time down the line when you have to chase up payments that have been sent with ‘Sent from Monzo’ by default. 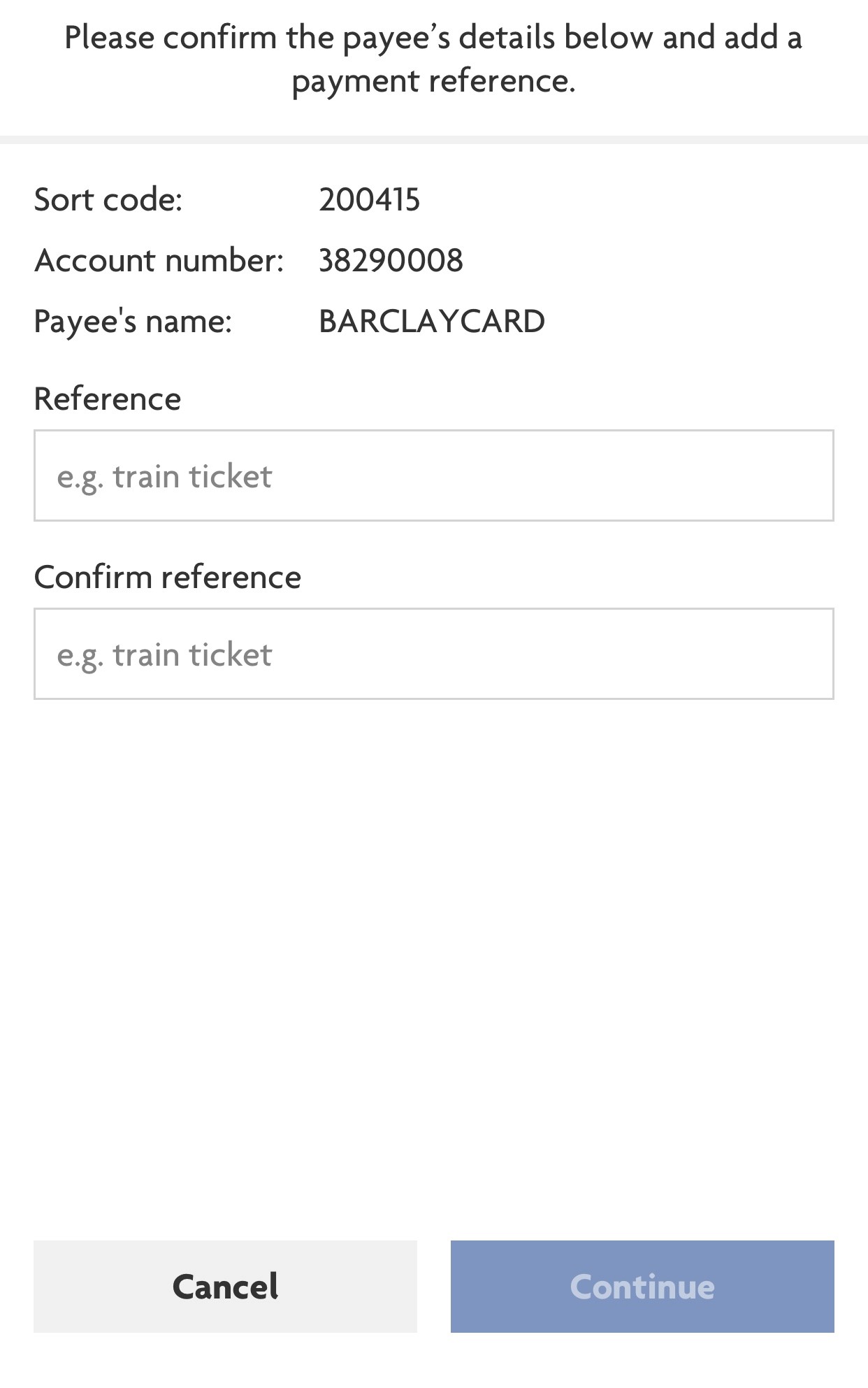 The problem here is that you are forcing a reference to be used. What if I don’t want to put a reference?

I have no clue if the Halifax app identifies that the recipient is Barclaycard (and therefore must have a reference entered) or not. If so, and for regular payments to “people” it’s not mandatory, then that is something I agree that Monzo should do. But at present Monzo don’t, so the approach they have taken is the least worst approach. It’s been discussed at length, do a search of the community.

Unless, I’m interpreting the last point incorrectly, why would a new one off payment be pre-populated with something that’s been previously used? It has no relevance to that new payment IMO.

I meant a new one-off payment to a previous recipient. This is useful in the case of payments of credit cards etc (that are not handled via DD). When making a monthly manual payment you wouldn’t want to have to enter the account number again, so it’s auto-filled.