I have received the following letter from Monzo which has caused deep concern with myself after getting home from work. I haven’t been with Monzo for nearly two months now, so I am unsure why they would credit my First Direct account with £526.60. 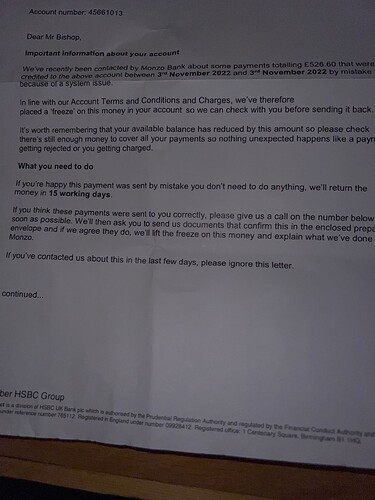 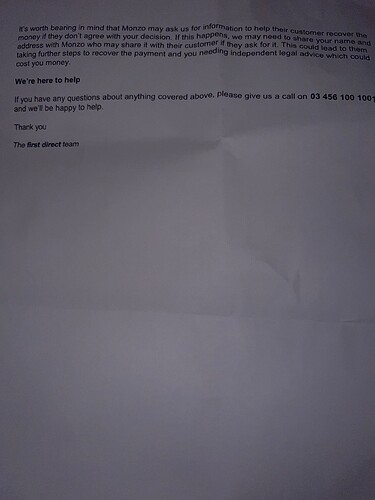 Did you call the number at the end of the letter and ask them your questions?

I don’t think you’ll get any explanation here; we’re only customers for the most part, and even if a staff member were to see this they wouldn’t be able to give you any information on a public forum.

I’d suggest phoning the number given at the end of the letter and asking them your questions. But if you want to contact Monzo about it, you might be best off emailing help@monzo.com

The letter isn’t from Monzo.

Sorry yes, I should have mentioned the letter is from First Direct, who in answer to the above question have freezed the money.

How I read it is that when you had a Monzo account you were credited with £500 by mistake. You’ve now moved on and Monzo want that mistake back and FD have put that amount on hold.

Just a bummer how my available balance gets punished for a mistake that isn’t even mine.

My reading is that on 3 November a Monzo customer transferred the money to the first direct account, then told Monzo they’d make a mistake. So Monzo have contacted first direct to say the money wasn’t intended for the account that received it, and could they have it back please.

I think the OP having had a Monzo account in the past and closed it doesn’t really have anything to do with the matter.

As I said in my initial reply, the first port of call would be to phone first direct and ask them all these questions.

Have you had £500+ from somewhere you weren’t expecting?

If yes, you aren’t being punished, you’re giving back what wasn’t intended for you.

If no, they won’t be taking anything once they realise.

No but it was my birthday on October 30, so perhaps either of family members entered a couple of wrong digits when sending money to me, but sent it to the wrong account, so that is also worth asking them too.

No, that’s the wrong way around. If someone got your digits wrong, that money will have ended up somewhere else.

I received two lump sums of £260 totalling the above amount quoted on that date, with the reference being “Credit From Monzo” followed by my full name.

And were you expecting that money or surprised when it arrived?

I wasn’t expecting the money, no, so I was surprised to receive the letter.

If I had £520 appear out of nowhere, I wouldn’t really be surprised when I was told it was a mistake.

So not really “punished” at all. Just returning what isn’t yours.

Of course I am not going to keep the money as it will end up being returned back to Monzo’s account within 15 working days, I am not that gullible.

Did you also get £260 from Monzo when you closed your account two months ago?

You might never find out how the error occurred. First Direct would be best placed to give you more information, but as you’re not disputing the fact the money isn’t yours, they might feel they don’t need to share any further details.

In answer to the first point, no.

In regards to the second point, I am in fact disputing the funds received in my First Direct account, because as mentioned I was surprised (not pleasantly surprised, either) at receiving the two lump sums of £260. As you say though, I will take it up with them.

You can, in theory, say no to returning this transfer.

However if the money wasn’t intended for you, that would be legally theft. The bank can’t forcefully return it but the person who sent it could report the theft.

It was an error on their part (Monzo’s) so least their accepting part of the responsibility, I will get in touch with First Direct in the morning to return the funds because the very last thing I want is a criminal record.

It’s a user mistake, not Monzo.