Andriod Pay is going to become Google Pay. Not a lot is going change I guess just re-branding.
Google sent this blog post to explain the change; 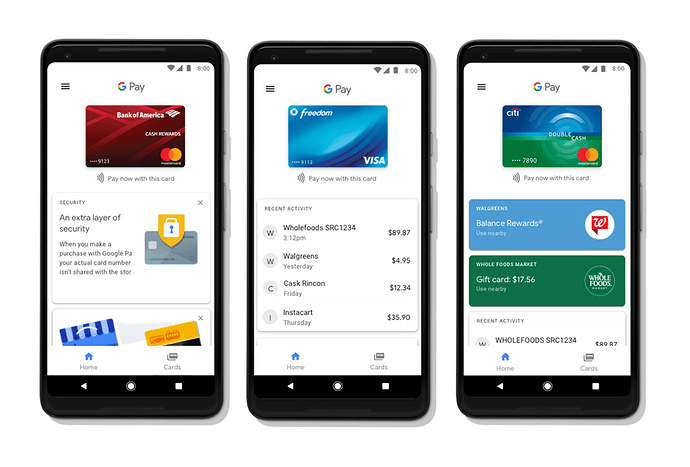 Google Pay - Say hello to a better way to pay, by Google

Fast, simple checkout. Easy access to rewards and offers. One spot for purchases, passes, and payment methods. All of these are ways we’ve been working to make paying safer and easier for everyone, everywhere. And you can make the most of these...

It was good to see Google choose Monzo

as one of the cards to promote new look Google Pay. 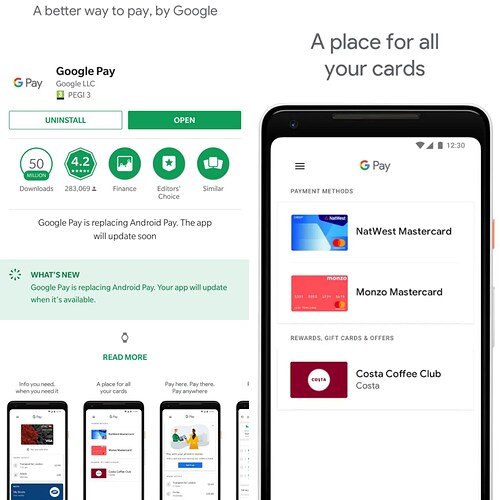 Downloaded the APK this morning and I definitely prefer this look and feel, everything just feels cleaner and to the point!

Google Wallet will be merged into it at some point.

The aim is to have the ability to use Google Pay for internet payments (e.g. like PayPal), in-app payments (e.g. Play Store) etc, in addition to the existing Android Pay functionality for contactless mobile phone payments.

They do mention this in blog post at the above link;

‘If you live in the U.S. or the UK, you’ll be able to use it to send and request money within the next few months. In the meantime, the Wallet app is now called Google Pay Send, and we’re giving it a fresh coat of paint to go with the Google Pay brand.’

If anybody’s impatient waiting for this app update (like me!

) here’s a link to APK Mirror:

It’s such a clean app

The only thing that concerns me is not knowing what information is going to be passed to merchants.

I’m quite protective of email addresses, and the fact that my Google email address is effectively my entire Google account across all devices, I don’t particularly like the idea of this being passed to merchants for online purchases to end up being put on their (and no doubt everyone else’s) spam lists.

Unless Google Pay gives the option to setup an alternative email address (e.g. one for shopping) which gets passed to online merchants, I may end up using it for mobile contactless payments only (i.e. just the existing Android Pay functionality).

No idea about the amount of information is passed over but I do know you can use a separate account for your Android/Google Pay, just need to change it in the App.

The one thing that will always make me choose Contactless via the phone rather than the card itself, is the fact that an encrypted virtual card number is passed to the merchant rather than your actual card details.

That’s good if I can set up a separate account for Google Pay, hopefully soon find out for myself.

I found this when I was researching yesterday, but it mentions “account information” rather than specifics like email address or phone number.

“In order for Google to provide Google Pay services, you permit Google to disclose to apps and websites that you have set up Google Pay, and to share your device, payment, location, and account information with your payment method’s issuer and network. Where necessary to process your transactions, you also permit Google to share your personal information with merchants, payment processors, and other third parties.”

The aim is to have the ability to use Google Pay for internet payments (e.g. like PayPal), in-app payments (e.g. Play Store) etc, in addition to the existing Android Pay functionality

Android Pay already had the ability to do in-app payments (it’s how I top up my Monzo account).

Thanks, I wasn’t aware since I’ve not used Android Pay.

I was just commenting on what I’ve been reading from news announcements about Google Pay.

The new app is nice I like it a lot. The new logo, not so much. It looks bad on the Pixel with its round icons…

This is one big reason why I ended up using Samsung Pay rather than the Android/Google offering; I didn’t want to put all my informational eggs in Google’s basket as I had a feeling that it would all coagulate somewhere for purposes not entirely to my benefit (as a customer I’m sure I’m horrible for being cross-sold to, in fact I rebel against it most of the time and deliberately don’t buy suggested products). This change perhaps makes that outcome more obvious.

The other big reason was the Samsung Pay was, for me, a better user experience, a better process. I’ll be interesting to have a look at how Google Pay has tweaked the workflow compared to Android Pay.

Agree, so can’t wait for Monzo to finally introduce it.

The other big reason was the Samsung Pay was, for me, a better user experience, a better process.

Outside of South Korea and the US, what’s the difference?

it works on Samsung Gear watch but Android Pay doesn’t

Okay but I meant if you have a phone that works with both, how is it a better experience?

I guess it is a case of heart v head. From a technical standpoint they may both achieve the same thing, make a payment, but people may prefer one layout or one supplier over another. Like chosing between easyJet and Ryanair, they may both offer similar service but you may prefer one colour scheme , or a different in flight menü

Or not being intentionally treated badly. easyJet is bad because it’s easyJet and it’s cheap and you get what you pay for. Ryanair goes out of their way to make sure you’re as miserable as they can make you.

Wouldn’t this be waste of precious development time and resources if Monzo went ahead and start developing for Samsung Pay?
I mean I know it’s important for some and deal breaker for few but Google Pay is universal for all NFC Android devices unlike Samsung Pay which is limited to Samsung only.
I know Samsung Pay is unique because of its capable to be used more payment terminals than any other contactless solution so maybe if Samsung makes this available for other Android phone manufacturers then there would be a proper solid argument for this.

This is not true in the UK, and only true in a couple markets (South Korea and the US, I think) - and only because it works without using contactless (it prefers contactless if possible there and if not possible uses electromagnetic induction to attempt a magnetic swipe, though it can obviously only send a single track that way so not all readers are happy enough).