I highly doubt octopus is half the price of bulb which is already cheaper than a lot of suppliers? They’d be running at a loss surely.

(Just looking at their rates, their ‘super green tariff’ is more expensive, as is their 12 month fixed and their variable. ) maybe economy 7 was significantly different.

I agree it sounds to good to be true but there is no lock-in and no exit fee. Nothing to lose in trying it out. R-

DId you enter usage amounts for that quote? I might be tempted to swtich too

I didn’t because their estimate was very close to reality.

Daily charge is a little higher than Bulb but that is going to cost me less than £1 pm.

I switched to Octopus in February and it has saved me a small fortune so far.

The service is great. The only minor issue for me is going back to manual meter readings, after having a SMETS1 meter with Scottish Power for several years. Hoping to get a SMETS2 installed with Octopus

Even without a smart meter, Octopus comes highly recommended. Now if only my monthly

spin-to-win resulted in anything other than £0…

. Hoping to get a SMETS2 installed with Octopus

That’s not encouraging. I filled out a form a couple of months ago, but there was a no specific contact period stated, just “We’ll be in touch”

It sounds like you are in an area where they are rolling out - but maybe not?

No problems with Octopus from me.

Did try to get a smart meter installed though and a guy came round and basically looked at my electrics for 2 seconds and said ‘no’ due to the main cable coming through the roof needing modified by Scottish Power networks and said someone would be in touch but haven’t heard anything since.

Recently moved away from them as USwitch said I could save a bit moving away to Scottish Power. Used SP before and thought they were dreadful but that was a few year ago. New plan forces me to get smart meters installed which is what I want so hopefully they’re proactive about it and I get SMET2 ones installed and then can move away if they’re dreadful (current meter has SP logos on it etc.).

Don’t want to dampen anyone’s fireworks, but are these meters any good? Might have been just v1 but I didn’t think they were very accurate. R-

I could never tally the V1 smart meter read-outs (which I manually logged each day for 6 months!) to the bills that were generated within the same period. So my confidence in them isn’t great.

But I now have a Gsheet into which I plug the manual readings I’m taking and compares with the generated Octopus bill. It calculates everything based on standing charge+actual use and so far is spot on; 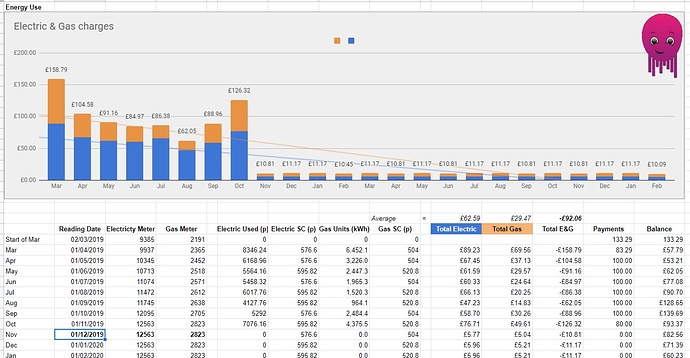 The data from my Nest thermostat is almost identical too.

Well I had thought I was needing to wait 49 days before the end of my 1 year fixed with Peoples Energy but the actually termination fee only applied for 6mths! So I could have left already.

Whilst on the Peoples Energy chat I found out their 75% profits back is spread evenly so doesn’t matter if you’ve been with them 1 day or regardless of your usage. They mentioned after the 75% they plan on doing 100% profits back.

They currently have approx 55,000 customers.

What they don’t know yet is if they are going to make a profit or by how much so that 2 million could be.

For me they would need to make £12 million profits and have 9 million to share out (£160) before that cashback starts to becomes cheaper yearly than Green.

Having an issue with octopus right now but I don’t know if it’s their fault or not.

Got a fuckoff £1400 bill for electric used between April-Oct 2019 where the house was for sale and empty and I was not nearby to do readings for them. So I just let it be estimated and claim the money back as the house had no usage during that time period as it was empty.

I got the final bill through from them and it’s like I said, £1400, that’s over a years usage in about half a year.

So I’ve emailed back to see whats going on, but it’ll be difficult as the house is no longer in my ownership!.

To add further context, I’m an ex IRESA customer who was force moved over to Octo but I was ok with that as they were cheapest.

It sounds like you are in an area where they are rolling out - but maybe not?

2nd of December is my installation date

I’m quite looking forward to having a smart meter, seeing “live” usage and not needing to do meter readings, which is kind of sad

I have a 3 phase supply so we cant have them. (not that we wanted them anyway)
Currently with octopus and they seem to manage the 3 phase tripple meter reading fine.
(Shell Energy required us to phone in, Eon allowed it online and Extra Energy was another phone only)

I highly recommend Bulb. I have been a happy customer for 3 years now. They have 100% renewable energy and great customer service

I’m only at the switch stage so haven’t really tried it but impressed so far. So far I know it uses magic links and GoCardless for Direct Debit.

The submit initial button goes to email rather than in app to start with. You could say its a bit green around the edges. 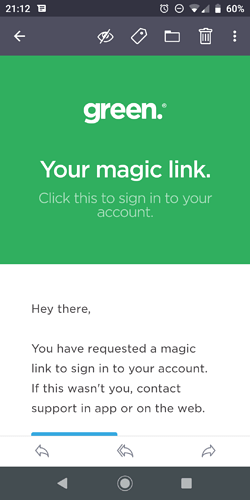 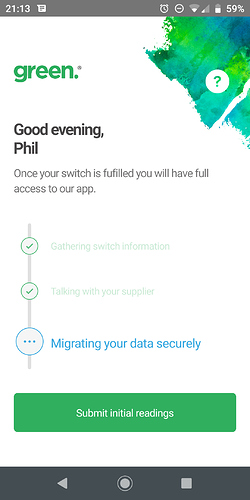