Anyone know how to cancel a split bill.

I requested someone to split a bill, as this person owed me more than this payment, they sent a bank transfer instead.

The split bill payment is now showing as pending on their part and I don’t know how to clear it. No Monzo.me link was generated either so I cannot send myself a penny just to cancel it.

I’m not sure this is possible currently. It may be worth contacting in-app support.

I’ve tried to do this before… I don’t think it’s possible. Once it has been requested it’s gone. I did this with my sister once and I asked her to cancel it on her side so I can re-request it but once she did cancel it there was no option to request payment again. She ended up just sending me money via Monzo the standard way. Perhaps something for the Monzo team to improve in future.

This is a bit annoying.

It’s very annoying. According to support, the only way to cancel a bill split is for the recipient to decline the request. Apparently they don’t time out, which means it could be stuck on my payments tab forever. (As the recipient in my case no longer has the Monzo app downloaded…)

@robinb The ability to cancel bill splits (or for them to time out) seems like an essential refinement on the feature… Especially as support can’t even cancel these (occasionally) unneeded bill splits on the ‘back end’. I don’t suppose you’re able to comment on whether this is something to be fixed soon?

This is an annoyance for me also. Really poor

I haven’t used bill split yet, but I agree, being able to cancel a pending request you’ve sent should definitely be part of its feature set.

Contacted support a couple of times for the same issue. Being able to edit and cancel spill bits is quite important, otherwise it assumes you never make a mistake.

This has been implemented in the latest android beta 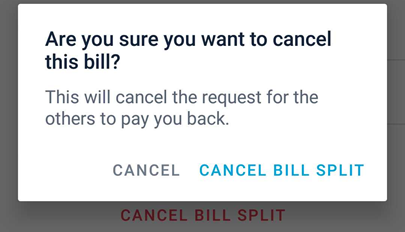 Can you edit the split too?

That’s a shame. Looks like editing Bill Splits is on its way though:

I have the latest beta but can’t see the cancel split button. Does it work only on monzo users split? Mines are with non monzo users

Does it work only on monzo users split?

This is implemented, so closing the thread.