I’ve recently had two situations where Barclays bank (in this case Barclays Finance) have rejected/stopped my application because of my bank account being Monzo.

The first was for finance for a boiler (via HomeServe) in which the system from Barclays stopped post the credit check and wouldn’t allow them to complete the direct debit stage, as it was a Monzo sort code. They contacted Barclays themselves and were told Barclays block access from Monzo bank to this service.

The second was similar to when I was applying for a mortgage (via Mortgage Advice Bureau) in which the system from Barclays stopped post the credit check and wouldn’t allow them to complete the direct debit stage, as it was a Monzo sort code.

I’ve checked this for you and this is a bank wide decision due to the likes of Monzo and Starling being digital banks, do you have other bank accounts elsewhere with a ‘high street bank’ as such that you can use?

Monzo support say there’s nothing they can do. Seems anticompetitive to me.

Anyone else had this recently? 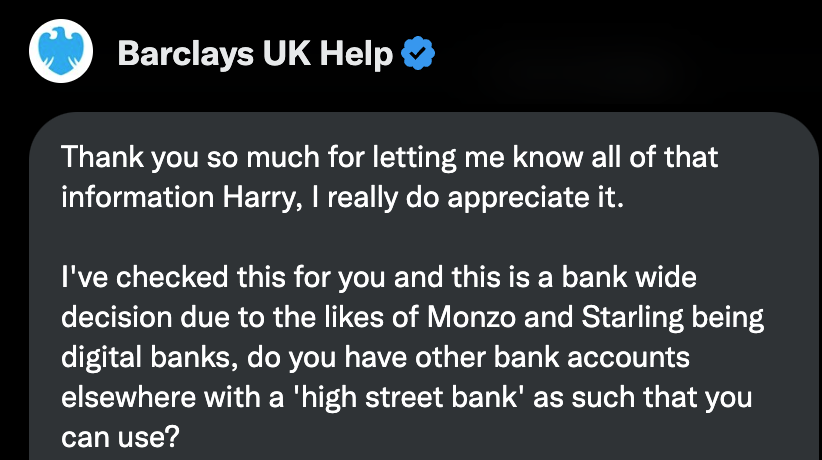 I’d just raise a formal complaint with Barclays straight to the CEO office. Then if they come back with

Given that we’re literally just in the middle of switching our JA from Barclays to Starling (including a Direct Debit for a Barclays mortgage) this is not great news. Do I cancel my switch? Do I go ahead hoping it’ll work out?

I’ve heard from someone internal that moving an existing direct debt might work. Just not setting up a new one for finance products…

Ah, then I’ll stay put for now. I wonder why this is, and whether it’s a recent policy. My partner got approved for Barclays Partner Finance in 2021 with Apple using Monzo.

Another reason not to use Barclays though…

Yeah, I’m going to. Also to the Financial Ombudsman once they reply.

I had to manually setup paper direct debit form with a few providers.

It is some kind of a KYC 3rd party software that many institutions use. Had similar experience with ii.co.uk. it was also potentially failing to do Bacs name & credit report matches?! It was weird.

I had a couch from DFS 4.5 years ago too on Barclays finance too!

A foolish decision from them!

I have an existing direct debit (which i took out using my monzo account from the start) with barclays finance, if this is there view on “Monzo/Starling” ect, i wonder if they will stop taking there money and ask me to change my direct debit to another account …. I bet they don’t because at the end of the day they still get the money thats owed to them no matter what bank it comes from.

I’d apparently passed the credit check (validating address and everything). It was only when setting up a direct debit. Since I’ve not had Barclays confirm it themselves (on the phone) and via Twitter. I’m unsure about the legacy software issues. Especially this far down the “digital banks” launch.

Maybe the complaint will get somewhere. Will report back (in like a year…)

I have Barclays partner finance for iPhone and had no issues applying with monzo as my bank account, for direct debit. That was as recent as November.

I can almost understand when this by someone that doesn’t know better, but Barclays really should!

I personally would not take a reply on twitter as ‘officially confirmed’, more just a standard response from customer services to try another account. Barclays tech support did recently tell me to go into branch to sort a problem with my Barclays app, after 20 minutes on phone of going round in circles with tech support who could not solve problem that day.

My advisor at one of the third parties “spoke to 6 people”, when they got to the regional manager and they confirmed it, that’s when they stopped trying.

I’m going to try and confirm it myself via the phone, but I’m drafting a complaint anyway.

Just to chime in here, as I understand it, unless something’s changed, it is indeed Barclays policy to reject, or more commonly revoke a line of credit post approval if their additional checks determine your main account is with Monzo or Starling.

So if they’ve already rejected you on the back of this, I don’t think their suggestion would remedy it if you tried again. You’d need to sever your ties with Monzo first.

I don’t know how they define it, but some have certainly slipped through the cracks.

The justification internally was that digital banks made it easier for fraudsters to get accounts and didn’t believe Monzo or Starling did due diligence in preventing it. I don’t know how much of what they say is true, but the FCA are investigating Monzo for a similar issue which certainly adds credibility to their justification. Important to note, this isn’t something Barclays have specifically said themselves, it’s come from folks who work there.

At the end of the day though, they’re banks, and it’s blatant discrimination that ought to be regulated against. It’s like the modern day equivalent of IBAN discrimination. With that said though, banks still do discriminate for much worse than who you bank with, Monzo included, so there’s no high horse for anyone to mount.

It’s their criteria, if they won’t lend to you, complain and move on. Barclays will often pay you hush money for complaining too, so you’ll at least get £100 or so out of it. They won’t change it unless there’s demand or incentive, so vote with your wallet.

Surely this is very recent? I’ve had several Barclays finance from Apple before 2021 using my Starling account.

Surely this is very recent?

Nope. If you have a quick look back on here there are reports of this dating back to as early as 2017. Often in respect of mortgages or the iPhone upgrade program.

Back then Monzo would say they have fixed the acceptance issue until another one crops up and it’s the same issue.

What happens to existing products? Should I cancel my switch to Starling?