Went into the Apple Store today to pick up a new iPhone with the upgrade program, but left empty handed as apples system would recognise my details (confirmed 100% that everything was correct). Looks like it is an issue on Apple’s side as the loan application was accepted by Barclays.

I saw that it looks as though others have had a similar issue and I’m thinking it could be due to using my Monzo account.

Has anyone had any luck setting up the Upgrade Program with Apple?

There have been issues reported around Barclay’s Partner Finance not accepting Monzo’s sort code:

So we’re getting a new kitchen! Huzzah! We were hoping to pay for the kitchen with “Barclays Partner Finance” (BPF) - however on their online application form when I entered the sort code for my bank “04-00-04” - it says it’s unrecognised. So I’ve had this problem before, when a company hasn’t updated their records and doesn’t know this is a legit sort code… But this wasn’t the problem. The problem is that the underwriters at BPF have advised that Monzo is an “online only” bank, and as such …

Your issue sounds a little different though, given that you say BFP accepted the loan application. Also, people have noted (in the thread above), that they’ve been successful in using Monzo with BFP.

Were they any more specific about what details they didn’t recognise?

No not really, they phoned Barclays and confirmed everything had gone through OK. But their app kept popping up an error saying please put in correct details. They are still looking into it at the moment, so might be OK. Just wondered if anyone else had experienced anything similar!

That’s annoying – hopefully it gets sorted! I suspect there’ll be quite a few people signing up for the Upgrade Programme with Monzo accounts today, so it might be worth checking back.

I took out iUP last year with my Monzo account. Wasn’t a problem then.

That’s annoying – hopefully it gets sorted! I suspect there’ll be quite a few people signing up for the Upgrade Programme with Monzo accounts today, so it might be worth checking back.

I had a similar issue with v12 finance (for my bike)

I took out an iPhone on the upgrade program today. It went through fine using my Monzo account details for the DD.

Just picked up my iPhone from Apple. Monzo went through perfectly on the upgrade programme.

Which one did you get? Max or not?

Noicee, will probably be upping to the Max soon

I had a look at the max in store. Don’t get me wrong the screen was

On an Apple note, last week I was in a kids soft play centre in Manchester and paid with my Monzo Card. The woman on the till said ‘Ah, Monzo. They’re great.’
I asked where she had heard of Monzo ( seeing a hot coral card is a bit rarer oop north than the Capital I think), and she said she used to work in the Apple shop and one guy had brought in his Monzo card one day and within a week all the Apple Manchester Arndale staff had one, so she’d definitely heard of them before.

So I’m sure many off the staff you speak to in the Apple store are carrying a Hot coral around somewhere!

That would be me

Did you get the name of the woman at soft play?

Ah, no I didn’t get her name I’m afraid!

Just made me realise that if anyone is in monzo’s let demographic, it’s Apple employees!

Has anyone had any luck setting up the Upgrade Program with Apple? 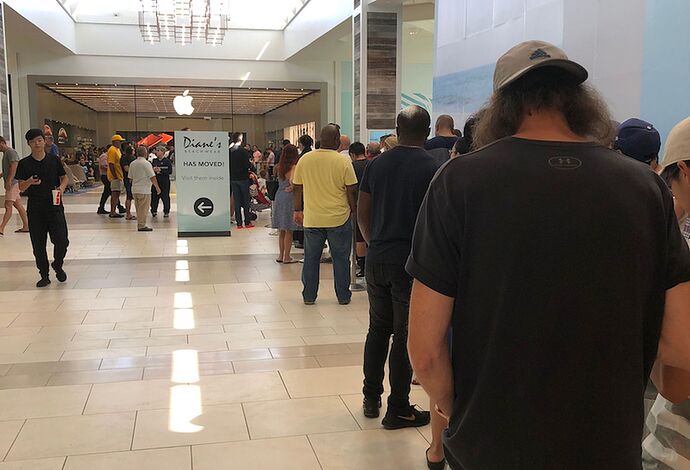 We're hearing from a number of readers over the past hour or so that Apple's retail stores are having problems completing in-store...

Yup, took my sister into Birmingham to get help with her iPhone while wearing my white

Anyone else had any issues or if it went through? I have an appointment tomorrow and not sure if to try using my Monzo account details?

Worked great for me yesterday afternoon.
Shouldn’t have any issues