Looks like Yahoo just dropped a new “chat” app (which is very similar to Slack/Discord).

Are people still open to a new 3rd part chat service? Off the top of my head, I can already think of.

The list goes on, I’m sure there are others.

So with Yahoo’s spotty reputation, and yet another service which seemingly replicates what already exists… Will anybody be using this?

The problem I find with chat apps, is simply getting everyone else to use them - That’s why I still have to use FB messenger so much (which I hate). 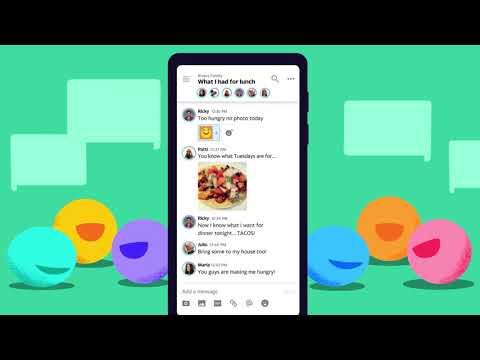 Yahoo today announced the launch of a new group messaging app that it's calling Yahoo Together, which features built-in organization and smart...

I really don’t see anyone using this.

Nobody is going to use this.

I really don’t see anyone using this.

Agreed - On the basis that it’s not native to anything, and it’s so hard to move messaging platforms.

I guess there’s always new generations coming up, so perhaps it’ll catch with a young demographic.

The only new messaging service I could see working would be a replica of MSN Messenger circa 2004.

All the 80’s babies would be on that in a flash!

I thought they were long out of business

I’d hazard a guess that most people aged 25 and up have heard of Yahoo, but probably dismissed them as “not as good” as the likes of Google etc (they’d be right!)

Yahoo was bought by Oath Inc (owner of Verizon and AOL) - They had a big plan to re boot Yahoo, so I don’t think the name will be going anywhere.

I’m all for new shiny apps to fill a gap in the market… I’m just not sure the messaging market had any gaps!

Yahoo is very well used around the world, just not in the UK anymore. A year since Yahoo messenger was retired it was only a matter of time since they publicly released a new messenger.

For reference Yahoo together is only Yahoo squirrel renamed, and was in beta for well over a year.

For reference Yahoo together is only Yahoo squirrel renamed, and was in beta for well over a year.

Yeah, when I clicked the link (which has since been disabled it seems), it still took you to the Squirrel app.

I’m not sure how well used Yahoo is in the US either - The twitter responses are very much “Yahoo is still a thing?”

Even if Yahoo mail (or any of the other services are used), it’ll be hard to convert existing users of WhatsApp/FB Messenger etc.

It actually looks decent though - I like the Slack style of chat app.

From the bankrupt company who lost all your data in a breach comes a new exciting way to lose your private messages called squirrel. Why, because you’ve got to be nuts to install it.

Looks more like Slack/Teams/Discord than other messaging services. Maybe they should have aimed it at business?

It looks very similar indeed, but is that a bad thing?

I think Slack/Discord translates really well into the social scene - Far better than Facebook Messenger or WhatsApp for example.

But that’s just a preference thing.

TBH in the office we use WhatsApp and WhatsApp groups. Any confidential information is sent via email to keep in inside our system