Yep in total agreement of this!

I wanted to add some comments to this thread to try and answer some of your questions and hopefully clarify a few things. We are learning a lot about merchant data as we go, so your patience is really appreciated.

Grocery store vs petrol station
When we receive information about merchants there is a flag which tells us what kind of merchant this is. For example, it might say ‘Restaurant’, ‘Service station’, or ‘Grocery store’. This helps us categorise your transactions.

However, with regards to Tesco’s and Sainsbury’s, some people may go into the service station to buy their milk on a regular basis. Some service stations have quite a large food selection, so people may use the shop regularly for things other than petrol. We have no way of distinguishing between the two. We therefore made the decision to categorising all of the Tesco’s merchants as one.

We had a slight issue earlier this week where the stores were miss-categorised as transport, but this has now been fixed.

Categorising things
If you find that your petrol purchases are being categorised as groceries, you can very easily change the category to transport. In addition, if you want to add expenditure to sub-categories, for example splitting out fuel and airline travel, you can add notes. Notes are searchable.

Hopefully that helps to clear things up!

I think a lot of us sympathise with the fact that you have to work with what you’re given (revolutionising an industry can’t be easy!) but it’s good to get some confirmation/insight into it.

I didn’t know that notes were searchable so that’s really useful to know!

Thanks for the update

Love the work going on here.

Not sure I agree with the reasoning on the decision to make Tesco and sainsburys service stations display by default as groceries though. I’d have though the majority of people in a fuel station are there for fuel, not groceries. Surely the default action should match the more popular use for the merchant?

@Matty I’d agree with you. I think categorising as the retail outlets main function would work best. Petrol station comes under transport, if required it could be manually changed to groceries. I feel most people use the tesco petrol station for that purpose rather than shopping. Just my opinion. What’s everyone else’s thoughts??

Definitely, I mean even if you did buy groceries, if you spend £40-£50 filling up your car, or even £20 just topping it up, chances are that makes up most of the cost… Who’s doing full shops in petrol stations? Plus, even if you do buy, you’re most likely buying car related items that comes under transport anyway. The only exception is chocolate, milk and possible a last minute item or two

Not entirely sure about the logic here. I have to admit that @Matteo makes a pretty good case for splitting Tesco and Tesco Fuel, and I’d be keen to add more weight to his argument.

I do most of my shopping and petrol purchases at Tesco. Nevertheless, categorising Tesco Supermarkets and Tesco Fuel as the same company really ruins Mondo’s vendor search and statistics features for me. For example, while I normally spend around £20 on a weekly shop and buy a few £3 meal deals at Tesco in a week, the fact that I bought £40 worth of petrol this morning has resulted in my average spend being a little higher than it really ought to be (if you just think about my grocery shopping at Tesco, it would be £5.59 rather than £9.03). The graph in the screenshot demonstrates just how Tesco Fuel purchases differ from Groceries. 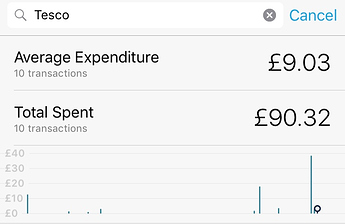 I’d also agree with those on here who’ve doubted whether people actually go to Tesco Petrol stations to do their grocery shopping. Sure, one might buy a sandwich or chocolate bar in one, but the £1-£3 expenditure on that is negligible in comparison to the £40 one might spend on petrol at the same time.

@natasha, is this something which Mondo would be happy to reconsider given the number of opinions already voiced on here? I really feel like splitting out Tesco Fuel and Supermarkets (as well as Sainsburys, Morrisons, etc) as has a been suggested would be a helpful move for many Mondo users.

when you fill up at sainsburys have you not already done your food shopping and paid at the checkout and classed it as groceries , then taken your car to the filling station and pay for your fuel at the fuel checkout - two different transactions at Sainsburys - this surely then gives you the option of changing the category to transport or noting fuel on the amount if you want to separate fuel from servicing costs in transport ? both spends have been at Sainsburys which presumably as a seller has one id code (?) so can’t be separated (?)

Just like to add, I went to a shell garage today and actually did for once spend a little money on some food items as the Shell garage is connect to a Spar. This all came through under ‘Shell’ not Spar and was put into Transport. I don’t have a problem with this, as again I spent much more on fuel, but then this same logic should be applied back to Tesco fuel stations

Wondering if @natasha or someone else at Mondo could answer the other voices in this thread about possibly reconsidering the supermarket vs. supermarket fuel argument?

We have discussed this a lot internally and agree with your reasons for wanting the groups split out. It is something we are going to do, but it won’t be immediately because of the restraints on engineering time.

We need to be able to split a transaction into multiple categories if we need. When I buy from a superstores I buy drugs, food, equipment, clothes and lottery tickets! I buy lunch from Boots some days and drugs the next. All the categories are meaningless unless you can manually split transactions.

A post was merged into an existing topic: Custom Categories - 1

I agree with @Matteo with the category being the main function of the shop. If you really wanted to split your shopping while getting petrol then you could do just that, pay separately. Then categorise them as appropriate.

For budgeting this can be a pain when grouping purchases into a single payment. Like when doing the weekly shop but adding a DVD or some clothes for example. So when I remember (not often) I put it through as separate payments. Then can categorise as needed.

The only option until rich transaction data starts being sent with payments.

… until rich transaction data starts being sent with payments.

I’m hoping this will happen someday. But I’m not too optimistic that it will happen anytime soon as even paypal (who don’t seem to have any technological limitations in this respect) don’t have rich data for anything I have bought recently. They must aspire to want to provide this data but they are perfectly happy to accept unitemised requests for payment.

could this data be made available to the app, and have an advanced option to tweak these things. As a for instance I always topup my electric at a filling station I never use for my car, so I might want to flag all transactions for that retailer under electric

I use retailers that also sell petrol: i.e. Tesco, Morrison’s and Sainburys.

Monzo can’t recognise when I’ve used them for groceries or fuel (transport) even though they show as petrol/shopping on my normal bank statement.

Hi Chris, this has been raised before so I’ve moved your post here. Hopefully you’ll find Natasha’s comments earlier in the topic helpful

As everyone else has said, it was a mistake to bundle it all into groceries, most people will be only fuel from fuel stations

Hi is there any update on this, I’m constantly switching between two categories for Sainsbury’s, it’s the only annoying things about Monzo. I was going the new current account might change this but it seams the same. Cheers