Recommend me a *modern* credit card

Yeah. Chargeback is a ‘best we can do’ service. If a supplier goes bust, you won’t get anything back because there isn’t anything in the pot, and you’ll never be able to rely on chargeback.

Section 75 is mandated by law, and means the credit card provider is jointly liaible in the case goods are not as described or there is problem obtaining them. That means if your supplier goes bust, you could immediately claim on the card provider and not become a creditor to the supplier.

But then Curve would sell the benefits of chargeback, because their model inherently cancels the legal protection.

Question regarding Amex cards, if a shop does not take Amex but they do take Apple Pay. Can you pay using your Amex card on Apple Pay? The only thing keeping me from getting one is that it’s not as widely accepted as visa and MasterCard. This would certainly remedy that as I could just use

if a shop does not take Amex but they do take Apple Pay. Can you pay using your Amex card on Apple Pay?

No. It’s still paying with Amex, even through Apple Pay.

Ohh that’s disappointing! Thanks though.

The only thing keeping me from getting one is that it’s not as widely accepted as visa and MasterCard.

I keep hearing this but it’s not my experience. It’s rare to find somewhere that doesn’t take it nowadays I’m my opinion. Just in case though, I have a second card

I keep hearing this but it’s not my experience.

I’m happy for you that your experience is different, but @Avian946 isn’t wrong in saying that it’s not as widely accepted.

I am regularly told by local stores that they don’t accept Amex - my local pub The Chamberlayne, my local off-licence Borough Wines, my local cafe Cable, the local pizza place Sacre Coeur (great pizzas btw!). In fact the only place that accepts Amex that I can think of is Tesco. Basically major chains like Tesco and Pret are ok but if you like to support local independents then Amex is pretty useless because of the whopping charges for retailers.

You can use PayPal for this.

Yes they do. It’s only free for the first £500 a month (or £200 cash, like Monzo). They also “charge forex fees at weekends cos the markets are shut”, to paraphrase the email I received this week. I have never seen that before. All this from an email intended to entice me back with a headline of no fees.

American Express do regular campaigns for small shops. They have an entire promotion around them, with specific stickers in the windows and offers for users.

I can think of a handful of places that don’t take it (then I just use Monzo - you’ll always have a debit card on you usually) but small shops certainly take American Express!

Not sure if this is new, but American Express have a webchat service now.

They must be fine overall with that ‘Achilles Heel’ model though. If they wanted to be accepted in as many places as Visa and Mastercard they could, by charging shops the same as those companies and lowering their rewards.

I honestly think it’s a perception. It’s not the reality. In reality most places that accept card take Amex. In the past it wasn’t the case, and they have to shift that perception.

120,000 shops began accepting them last year. It’s pretty good, just needs better promotion. Stores also need to realise they probably will make more by accepting it than not, especially since the rewards on Amex are hard to beat, and almost everyone I know has one and chooses to go where it’s accepted rather than not.

Heck on their Twitter/Facebook you have comments saying Sainsbury’s and Waitrose don’t accept it. They do, but it’s a perception.

The problem is that it sticks out like a sore thumb when they don’t. It leaves the - fair - perception that Mastercard and Visa are universal and Amex optional, as far as retailers are concerned

Posted this on another thread yesterday 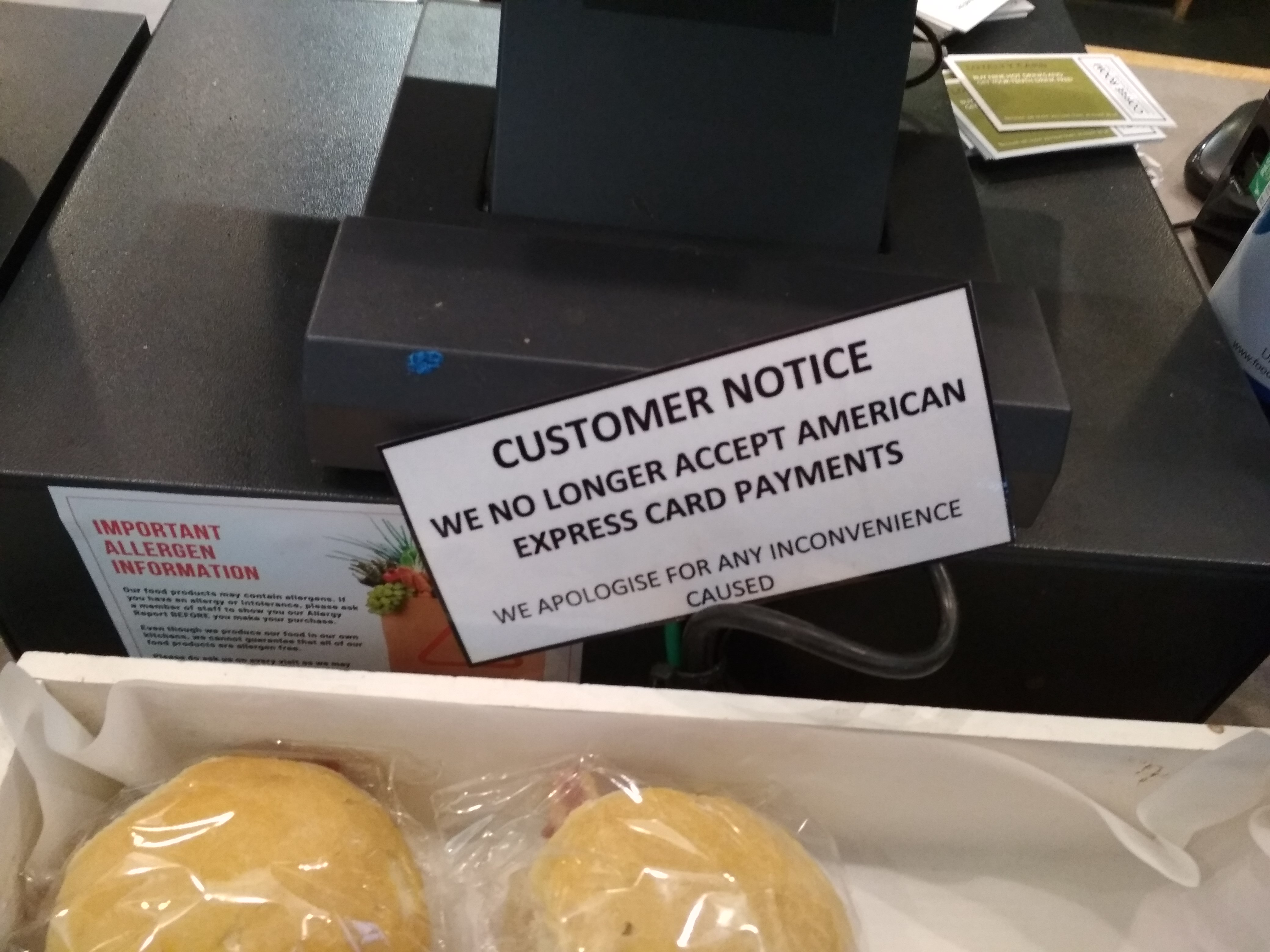 When both retailer and consumer are your customers, you have to pander to both

I honestly think it’s a perception. It’s not the reality. In reality most places that accept card take Amex. In the past it wasn’t the case, and they have to shift that perception.

You might as well say that Sebastian Vettel needs to shift the perception that he’s losing the F1 title race this year.

Until all places which accept VISA/Mastercard also accept Amex, the statement “American Express is not as widely accepted” will continue to be true.

That’s not a perception. That’s an empirical fact.

I don’t think anyone has said that’s Amex is accepted as widely as Visa and MasterCard. I certainly haven’t.

Ps. Sports? Not a great analogy to use on me

In reality most places that accept card take Amex. In the past it wasn’t the case, and they have to shift that perception.

That is simply not true, unless you mean “most” to be “over 50%”. I had Amex until recently, living in London, and it was incredibly annoying. Luckily my card recently changed to Mastercard, and now I have no problems at all. Even online, I had to get round it using PayPal. Now I never need to do that either.

Each person has their own experiences. Where I frequent, I can only think of a handful of places that don’t accept it.

Clearly where you frequent the opposite is true.

I have a colleague who has never had it refused, so clearly he has a different experience to me.

At the end of the day, if it’s that big of a deal, just don’t get an Amex. For those who can manage it, it provides by far the best set of rewards.