I recently got a Halifax Clarity Card, mostly because the Mastercard exchange rate is usually somewhat better than the Visa one and I wanted a credit card for spending abroad.

However, it is disappointing to see their app is quite slow and clunky to use. You need several taps to get to see the pending transactions, which take days to clear and don’t offer much detail. The exchange rate is not easy to see (and not possible until it’s cleared), and what’s even worse - Halifax doesn’t pass the original currency amount to Monzo, so all I see in Monzo is the £ amount with no idea what the original was or the exchange rate used (my Nationwide card passes the original amount and that shows in Monzo too).
Topped with no spending notifications, it’s a pretty 2000s experience.

Are there any credit cards out there whose app even remotely matches what we are used to with Monzo and Starling? Spending notifications, good Open Banking connectivity, fast app, no foreign fees?

Alternatively, does anyone have any inside information (or any tweets I’ve missed) about whether Starling are actually planning a credit card this decade?

Are there any credit cards out there whose app even remotely matches what we are used to with Monzo and Starling? Spending notifications, good Open Banking connectivity, fast app, no foreign fees?

No. Amex comes closest, with instant notifications and Apple Wallet integration for all your card spend (including physical card). Chat and phone are quick if not always the most helpful. Responsive and nicely designed app.

Alternatively, does anyone have any inside information (or any tweets I’ve missed) about whether Starling are actually planning a credit card this decade?

, as usual for fintechs

I’ve never had Amex. In my previous business we started out accepting it but dropped it as there were too few cutomers using it and the fees (to us) were very high.

Is it really widely accepted in the UK and Europe?

I haven’t had many acceptance issues in the UK, mainly small businesses, but even they seem to be improving as they switch to these little tappy card reader + iPad combos (Square and the like).

Tandem was the place to be but closed 2 years ago. Tymit maybe?

This thread should be enough to put anyone off them: Check your bills, folks! - Bug Reports - Tymit community

They’re a bunch of incompetents pretending to run a credit card company and somehow getting away with it. When I was briefly with them, I had so many issues with dodgy coding it’s hard to wrap your head around it

I know that there are some folk who never had a single issue with Tymit on here, but to me that is yet another red flag. Why do some people run into dodgy coding when others don’t

Is it really widely accepted in the UK and Europe?

For 99% of my spending it’s accepted. Even the little stores that accept card tend to accept it. I actually can’t remember the last time I was declined using Amex.

I don’t use it abroad though so can’t speak for Europe. And to be fair I’m in London which possibly has a higher Amex usage.

In terms of big national retailers though they will accept Amex no issue.

Every now and then I have to use a Visa or Mastercard card because Amex isn’t accepted – most noticeably online. But that’s why I have a couple* of cards, and it’s not a problem.

Lol* to those who know me from the card design thread!

Zopa is pretty good when it actually works, mine gets declined 9 times out of 10 so I just stopped using it.

Zopa is pretty good when it actually works

Ooh thanks, and I actually considered Zopa but it doesn’t link to Monzo anyway.

Why does it get rejected? Bad software on Zopa’s side?

I mean the app is pretty good, it updates balance instantly and shows pending stuff instantly.

No idea tbh, it also doesn’t support Apple Pay which is my bad I should have checked before I opened it but I assumed it was expected by everyone now.

Amex is my main credit card in the UK, but when it’s no accepted (I’ve found increasing number of small shops not accepting it) I used a NatWest Master Card. Both of these are good, ok apps, and instant notifications, but they charge for non-sterling purchases (I need to change my NatWest card for one that doesn’t charge).

I also have Jaja which has an ok app, instant notifications, and don’t charge for spending abroad, so it’s my main card for non-sterling purchases. They however don’t support Apple Pay, and I can’t add it to my connected accounts in Monzo.

The app shows pending transactions and cleared transactions with a nice bar to show how much you’ve actually used of your credit.

Couple of extra tools in the app - like a repayments calculator to show how much interest and how long it’ll take to clear your card depending on how much you want to pay each month. 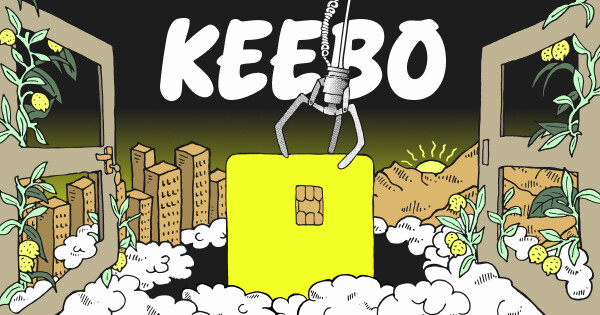 Keebo is the radical new credit card company that can help you unlock the power of credit for your future. Go get it!

These look good, but they are credit builders which I tend to avoid. I have not paid credit card interest in many years, but I don’t want to support the concept of charging 40% interest to people who have had a bad spell and are already struggling for money.

But their apps look very good at least

You don’t pay interest if you clear the balance each month (alas, credit building).

I think they have an issue with the companies themselves and the high interest rates they charge. It’s a principle thing.

I personally think they have a place amongst other credit providers but wouldn’t open a card with them, if not for the measly credit limits