I was surprised to find Monzo as the top paid ad on a google search for “Monzo” today.

Until recently it had been a battle between N26 and a strange website claiming to offer “Monzo credit cards” which tried to get you to apply for other products when you clicked on the promoted ad.

I think the last comment from a Monzo staff member was along the lines of “it’s an annoyance but allowed by google, so not worth the cost of competing with the other bidders”.

But now it seems Monzo are paying top dollar to secure their brand.

Any thoughts about Monzo spending money to appeal to people already googling “Monzo”? 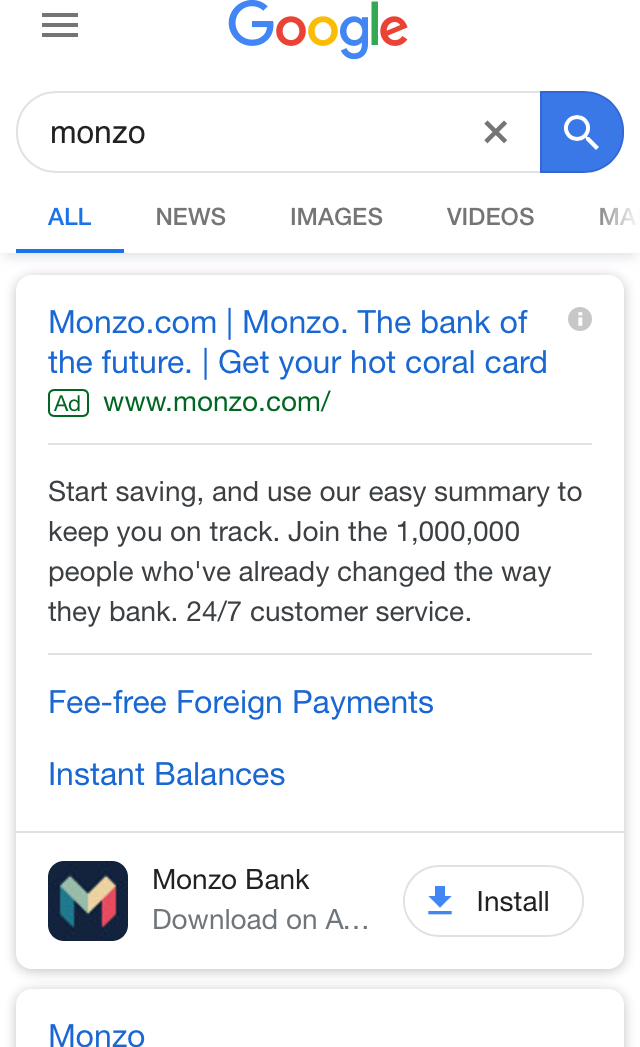 No issue with it, makes complete sense

I’d much rather someone find Monzo in its genuinity via their own ads, rather than a scam purporting to be Monzo.

Like most things at Monzo, I imagine that this will be a time limited trial to get some data. If that data shows it’s worth the money they’ll probably carry on. If it isn’t proven I imagine they’ll stop pretty quickly.

In my opinion, even if it doesn’t produce a lot of new accounts, it’ll be worth the money just to protect the brand on Google searches.

I think this answers your question really. Something like this could greatly harm the brand.

Agree with you lot, Monzo is now of a size and notoriety that it needs to start thinking more about its public image and to protect its customers from the seeming endless numbers of scum trying to rob people.

Any thoughts about Monzo spending money to appeal to people already googling “Monzo”?

Appreciate Monzo is all about breaking the stereotypes of things, but this is something I personally have simply come to expect from a decent brand.

It’s oddly reassuring that they are being proactive with their brand.

Searching for a company, and finding a competitor first, just seems like the company you are searching for doesn’t care, or doesn’t have the money to protect itself (again, just my perception).

A surprising number of people just type directly into google to find stuff, even if they know logically Monzo would live at Monzo.com. I’ve seen people type ‘Facebook’ into the search box on their browser default page, then click on the facebook login. So securing the top stop is a good strategy for any brand. It doesn’t cost much, but it is an auction system, so someone else can always muscle in if they really want to.

With Viola Black’s current marketing strategy I could definitely see that as something they would do.

Would the potential reduction of competitors appearing first in a Google search be considered as part of the impact of this?

Doesn’t always work, but some firms can be receptive to gentlemen’s agreements not to bid on each others terms (by which I mean simply brand name, not ‘banking’, ‘fintech’ etc). This tends to work more in favour of the ‘dominant’ organisation reaching out with a promise not to bid on the brand of pest in question as retaliation.

Retaliation bidding not a tactic I would expect from the Monzo, but that’s not to say a polite word in the right ear couldn’t make life more peaceful (and less financially wasteful) for both parties.