Just came back from my trip to Skiathos and I only withdrew cash from ATMS with it, restaurants and shops didn’t seem keen on cards! Although I do think the 30 day rolling withdrawl limit could cause issues, I just about managed.

Some of the ATM machines are really pushy with there rate but make sure you persist declining it.

When I got back to the UK there was a pop up saying Welcome back, you spent £x in Greece. But when I clicked it there was no sign of it anywhere? It would be useful to see along with a breakdown

When I got back to the UK there was a pop up saying Welcome back, you spent £x in Greece. But when I clicked it there was no sign of it anywhere? It would be useful to see along with a breakdown

I think you’re and Android user.

We get notification about it, but it’s not ready inside the app, so doesn’t open anything… so it doesn’t show anything. Here’s article about it: 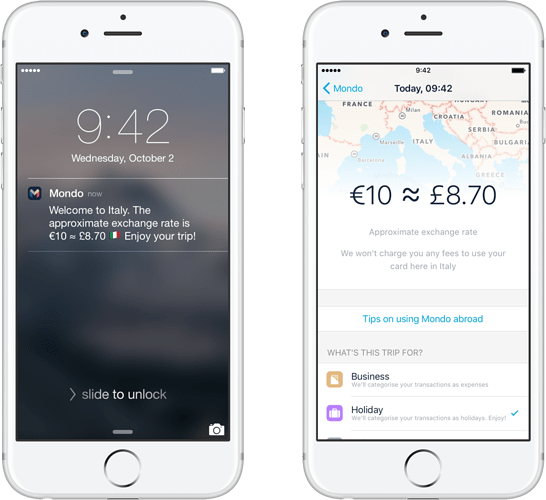 We really think Mondo is the best card to use abroad, with no fees, a great exchange rate, instant notifications and now travel reports!

I just compared Android to iOS, I was able to get back there retrospectively (my trip was in April and I couldn’t view travel report when I got notification as I was on android, but it’s there on iphone now).

Ah yes it is that thank you! Shame it’s not available in Android yet but hopefully won’t be long

Used several times in shops & restaurants. Not used ATM yet as not had anyone refuse card yet.

I am going to crete in 10 days will report back

I went to Thira (Santorini) in very late July for four or five days. I had
absolutely no problem paying by card. The only time we required cash was
for the bus ticket from Fira to Oia. I visited a spa, paid the hotel,
bought drinks and food - basically everything you can think of and I paid
by monzo card. the only time I found I wanted to have cash was for tips and
some of the small corner store type shops that most probably existed more
for the locals than anyone else. I will never travel without my monzo card
again. 10/10

Just an update - card didn’t work once but I tried a legacy credit card & that didn’t work either. Perhaps not the card that has an issue!
My wife & I used over 10 times and it really well even contactless.
The only better would have been a better euro rate but this isn’t Monzo’s issue!

I’m in Menorca now and had only one problem with Monzo in a ‘supermercat’, so used my backup card. Off to Greece on Sunday. Will try it in the Kavos area.(Oh dear! Not sure how that happened. Only after a bit of extra sun before going back to work.) Any thoughts on getting more euros out in Spain in case there is an ATM problem in Greece? Must be better than local supermarket rates on my one day home in UK.

Whilst I’ve not used my Monzo card for ATM withdrawal I have never had a problem in last 5 years using uk cards.
Of course you always need a back up card as in UK.

I will be travelling to Thessaloniki mid September for a week, cannot wait to test Monzo there for purchases and ATM cash withdrawal. Fingers crossed all will work fine!

As a quick update, my Monzo card is still behaving beautifully in the Greek islands! My only worry is that I’m going to hit the cash withdrawal limit very quickly out here on the prepaid card, so I’m really hoping that the current account card won’t have these yearly and monthly limits? I tend to withdraw cash a lot in the U.K. too. I just find paying cash is still so much simpler for me, so withdrawal limits are rather a pain. But other than that, very happy with the card!

Back from 2 weeks in Kefalonia. All works great. No issues at cash machines and no issues with acceptance. Greek law requiring tourist businesses to have card machines makes life easier than in the past.
Did wake up one morning to see a refund on my card for a restaurant bill but about an hour later that had been taken again as a “delayed transaction”. No idea what caused it

Just back from a week in Mykonos. Monzo current account card worked superbly! I did withdraw some cash as soon as I got to airport as was worried about card transaction availability in Greece. Needn’t have bothered cards were accepted everywhere. Monzo worked everywhere I tried it. Even contactless payment at the airport on way home.

A friend just got back from Greece and while they had no issues at POS reported some hassle with ATMs and Dynamic Currency Conversion. They claimed that at Athens Airport it was not possible to opt out of DCC, it was DCC only or press button to get your card back, and Eurobank ATMs go out of service and spit your card out when you decline DCC! Any other ATM will allow you to use DCC or not as per your choice and declining DCC enabled them to get the bank rate rather than pay any marked up rate offered by the machine operator

I use Eurobank’s ATMs quite often with no problems. One thing to note is that the phrasing of the DCC option is such that it could trick you into opting in if you’re not careful. Haven’t used the Athens Airport ATMs recently, I will and report back.

Same I was in Athens a week ago and my card worked fine at Eurobank ATMs while decling DCC.

So far no problems for my wife or I in Zante (still here), haven’t tried to withdraw cash. Only weird thing is my wife’s card has been used for contactless and then the pin is asked for?

Seems odd, but worth mentioning! Paid for meals and car hire😊

my wife’s card has been used for contactless and then the pin is asked for?

Too used to contactless in Blighty

Only weird thing is my wife’s card has been used for contactless and then the pin is asked for?

In Greece this is expected for payments larger than £30 (or is it €30, not sure) and every few payments for safety reasons.

In France they do the same only there you need to insert the card and enter its pin, which is even more inconvenient.