I want to contact a human being! Bring back that function

Hotel is saying card payment is declined. No declined notification appearing in my app. Hotel is saying their terminal has worked fine for other transactions.
Why are there only dumb articles within Monzo that won’t solve my issue? I want to reach out to a Monzo person, you know, an actual person with a brain, rather than an unhelpful article or some robot.

It’s not an instant response though, it will be hours more than likely.

If it’s not on your feed then it hasn’t reached Monzo so there’s no way they can see what’s gone wrong. Do they definitely take MasterCard? Was this an in person payment? If yes was it chip and pin or magnetic swipe?

Did you ask them to retry? 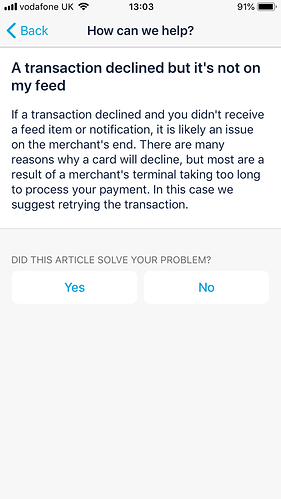 So the ‘dumb article’ actually answers the question!

No it doesn’t. The article is passing the buck. The merchant tried three times. They said their terminal was working fine with other cards.

It was a payment online. Hotel said it didn’t go through so I called them up in person, they tried two more times over the phone and still wouldn’t go through

Yes I found that afterwards thanks! Wasn’t intuitive for me to have to search ‘contact’.
Ideally the ‘contact’ should appear automatically, or after a user clicks on the ‘no this article wasn’t helpful’ button.
Other websites, not just banks, have similar help articles with a Yes/No button to indicate if the article answered your question, from my own experience clicking on ‘no’ has automatically brought up a phone/email etc to get in touch

It was a payment online. Hotel said it didn’t go through

I’ve had the same issue with Monzo in the past. I gave up in the end, and used a different card.

If it hasn’t shown in your feed then I don’t think there’s going to be much that Monzo can do as it hasn’t reached them - otherwise it would show something.

The “passing of the buck” seems to be with the hotel. They should be the one that is given some sort of error as to why they can’t process your card payment.

It would show a decline notification in app that states this if that was the case.

All decline messages in app have a reason, but since the OP isn’t seeing anything at all in app then it would seem that the issue is with the hotels payment processor and it’s stopping there before getting to Monzo.

Birmingham City Council payment over the phone didn’t work for me the other day, just kept saying invalid card number and I tried it 4 times before using another card

had the same problem and contacting support now, it’s definitely not on the merchant’s end because I have tried in several stores and it doesn’t work, although I can withdraw from ATMs, hence why I dont get what is happening

Maybe the contactless chip is broken. You order a new card

Are you in the UK?

If you are then does doing chip and pin work at the retailers? If it does then it’s new card time