Helping the Unbanked Discussion - Should Banking become a Human Right?

Should banks help people who have had their accounts closed?

As long as the first one means that a homeless person can still get an account, I don’t see the issue with that list?

@Revels again the issue for me is twofold.

Firstly ‘suspected of fraud’ isn’t ‘found guilty of fraud’. Bank staff may be completely sure they are right but that isn’t due process. We have courts and independent juries for a reason. People at the very least deserve a chance to present a full defence to an indipendent jury before they are found guilty of anything.

Secondly, being left unbanked is not a suitable punishment. It’s not even something anyone has consciously decided on in most cases. It’s just that banks are allowed to decline the accounts and nothing is in place to make sure that somehow, somewhere, someone is able to get an account.

I guess a key here is whether you think having a bank account should be a basic right, like I do. If you see it as a luxury or non-necessity, then there would be little problem in taking it away so frivolously, or at all. But I think in our society the disadvantage that leaves you at means it’s not something that should be taken away in any circumstance, let alone because banks have decided you are a risk, have committed fraud etc without any real due process.

Exactly this. Which is why my idea is that the Government appoints an exsisting bank or a new bank is created as a “Bank of Last Resort”. The role of the BOLR account is that you cant apply for one but you are CASSed to one if a Bank wants to offboard a customer for any reason.

It closes the circle of being left bankless. but if Banks feel the need to get rid of a customer they cna ask the regulators to make the switch. Whilst i doesnt address the issue about banks still having the ability to close someones account for no reason or close someones account but not share the reason with anyone it doesnt leave someone without basic rights. Its time to make access to banking a human right. Thats what I have asked starling in my discussion this morning to lobby to the government along with my above idea and other ideas to address the issue with old legislations.

If you feel like you’ve been tricked/coerced/unknowingly committed fraud, then I’d like to think it hadn’t got that far. Although I’m sure there will be edge cases.

If Monzo think I’m fraudulent and close my account, I have lots of other options. Even if they give me a CIFAS marker. You’re a long way down the road when nobody at all, even the accounts set up to help people in this situation aren’t getting accepted.

I don’t disagree as such about it being a human right. Everyone should have the chance to open an account. But where do you draw the line if I commit fraud/abusive every single time?

If Monzo think I’m fraudulent and close my account, I have lots of other options. Even if they give me a CIFAS marker.

But where do you draw the line if I commit fraud/abusive every single time?

Exactly even if its a strict account where everything is monitored. People should be allowed to pay their bills and receive their income. No matter what

Also. One of my other ideas is having a “No bank ledger”.

The idea of this is where someone is given a “special bank account” by a selected bank in which the only functions it has is Direct Debits, Incoming Payments and the only way you can access the money is in branch by withdrawing it. No debit card and no online banking. This still gives people banking abilities. But again this should not be a permanent decision and should only be for time and only if they are actually guilty of what they are accused of.

And this is where I think we’ll never agree. Someone can make a mistake or anything else, but if you continually break the rules then you shouldn’t just be able to say “But you have to give me a bank account”

Oh no I don’t think the bank should have to offer them an account. The bank absolutely should offboard that customer but they need to be offboarded to a government controlled bank or service providor that can offer very strict banking facilities but heavily restricted but wont be declined. Not having to go around banks being told no. Thats EmOtIoNal DaMaGe. IE:

Nothing else… and until the your cleared thats all you can have. That is what the process should be. They need to be given something as a last resort to protect banks and to protect the person from further carrying on their illigal activities. If they were not engaging in a crime they have not been left with nothing and they have the ability to apply elsewhere.

TLDR: banking should be a human right

But where do you draw the line if I commit fraud/abusive every single time?

But is it then fair on some poor employee to have to endure abuse day in, day out when dealing with customers who have been off boarded for abusing bank staff up and down the country? That sort of working condition can, and will turn people suicidal.

Or is the BOLR then above financial crime regulations, and can allow fraud to go on unchecked, because they don’t have the power to block banking facilities? Or would someone instead have to manually check and approve every single transaction? At that point, cash is both quicker and easier to use.

I honestly think that if someone’s been repeatedly abusive to staff, or has been proven guilty (this is key) of fraud, they should be barred from banking. But if it’s only a suspicion, there needs to be a full investigation and an eventual verdict before any CIFAS markers can be issued.

So. Peoples are abusive anyway. So won’t change anything and the idea of BOLR wouldn’t put banking above stopping crime it would provide someone with an account that only lets them:

No debit card. No online banking.

That’s all. People should have the fight to do those things above

In the case of abuse against staff. I think that’s where I would say any bank account should be able to be closed. In the same way that you can be denied NHS treatment if you abuse NHS staff. That’s a choice. Although there should be a way you can reapply for one after a certain amount of time, and the consequences have to be clear to the person before they are exercised. They should be told, if the abuse continues you could be left unbanked, if they continue, then that’s the choice they make.

In the case of being found guilty of fraud I disagree. There are many punishments for that, normally involving prison time, that are to be handed out by a judge based on law and precedent. Being left unbanked is not a punishment that judges hand out.

In the case of being found guilty of fraud I disagree. There are many punishments for that, normally involving prison time, that are to be handed out by a judge based on law and precedent. Being left unbanked isn’t not a punishment that judges hand out.

I think it should be. There’s not enough prison capacity as it is, so if we send all the low level money mules and others who commit financial crime to prison, we’d have an even bigger issue of prison capacity (and I wouldn’t want my taxes to go on to feeding them, etc). Not to mention, a criminal record and extra consequences don’t feel right for those who might make a mistake and commit crime unknowingly. As you can be barred from driving, you should be able to be barred from banking by a judge

That’s fair enough as a view I guess. But if that’s the case, the law and guidance for judges needs to changed.

While it remains that this isn’t a legal form of punishment, I think it remains wrong for it to be a consequence of being found guilty of fraud. Or, as it is right now, being suspected of fraud.

A key difference to the system now is that that leaves the person knowing fully before they commit the crime that could be a consequence and afterwards knowing exactly why they have been left in that situation. 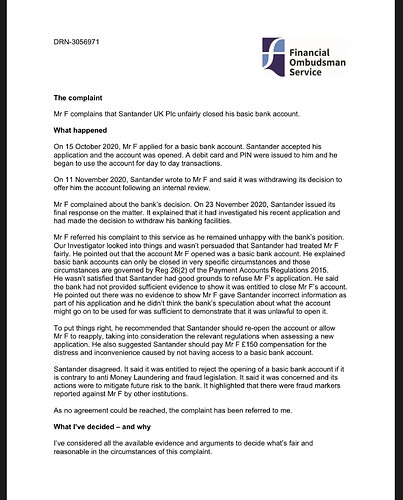 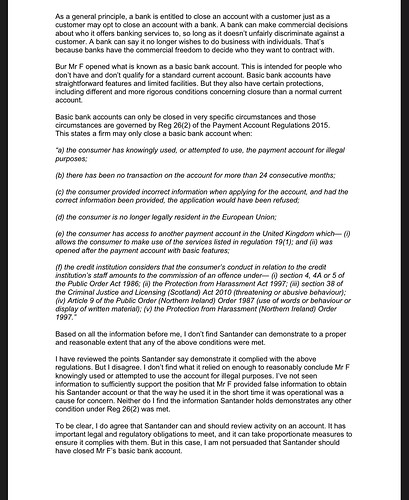 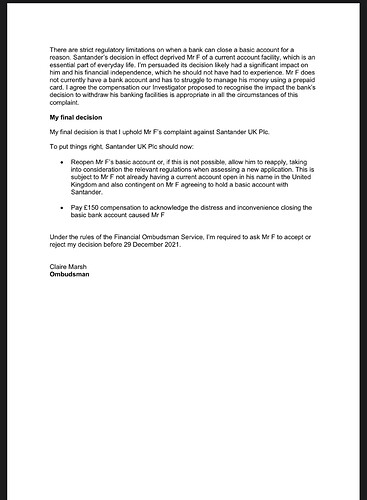 If the customer had used the account to launder money, or to commit fraud then it sounds like FOS would have agreed with Santander.

If somebody repeatedly and persistently abuses a service provided to them, should they be allowed to continue using it? Even if what they’re doing is illegal?

All they did was apply for an account as they was bankless . The bank closed the account for no reason even though it was a basic account.

Banks don’t give the smallest care for people and not everyone will fight the decision and will be left bank less.

Banks need holding responsible for this behaviour. Banking should be a human right and I hope after my video call with the Starling Commercial risk officer I hope they go to parliament and lobby for change.

You didn’t answer my question.

If somebody repeatedly and persistently abuses a service provided to them, should they be allowed to continue using it? Even if what they’re doing is illegal?

No unless it hinders their ability to live, receive salary and pay their bills to live

I would agree with your argument if there was facts to show that the percentage of account closures is lower to the percentages of financial crime convictions.

Again. Banks can hide behind legislation from decades ago and refuse to share why an account is closed.

Sadly people are coerced and blackmailed into making mistakes not should not stop them from accessing basic banking functionality that they need to live. Work and get paid.

If you have a look at the rest of the thread and the discourse in Monzo in the media you will see that I am not expecting banks to overlook crime.

I am asking banks to find a solution to a problem that needs fixing.