Last night I made a purchase using Flex. The notifications I received are screenshotted.

Choose a plan for your £237.50 purchase. Otherwise, we’ll select the lowest monthly instalment. That’s 12 instalments of £22, including £21.26 in interest overall.

On the face of it, seems pretty harmless, “Select an option to get going”.? I suggest that users should be able to select a different default when we don’t want to ever be charged extra.

I personally saw the notification as:

Choose an option now — or be charged extra.

I disagree with the friction required to not be charged.

Could I suggest that Monzo Flex has an option allowing people to change their default? I for one prefer and exclusively use three months (No Interest). Having an option would mean people won’t ever be penalised with interest if they forget to act in time and their default was no-interest only.

You’ve not selected a plan for your £237.50 purchase. We’ve used your default 3 months with no interest for you. You can extend this to 6, or 12 months in-app if you want to.

Hopefully allowing a user default is a relatively small change for a better user experience for all. 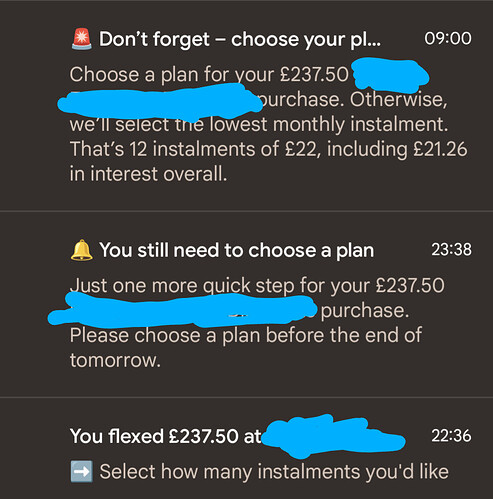 This isn’t a threat, it’s the rules.

Monzo have to put you on the longest plan if you don’t select it.

You’ve an entire day to make that decision, Monzo make plenty attempts with notifications to make sure that you actually review the transaction and place it into the right plan for you.

Like Revels said it’s not a threat it’s being a responsible lender by reminding you multiple times, if you take no action then this is the plan you’ll be on and this is what it’ll cost you.

Better to be automatically on a lower monthly payment that you can afford with interest than a higher monthly payment you default on. It’s pretty common. It’s no different to a credit card taking a minimum payment at the very least.

If your notifications are going missing, I’d suggest looking at why they do. I’m assuming this is Android, so make sure that Monzo is exempt from any kind of system actions related to battery optimisation etc.

This debate has happened before.

Surely you must have planned to use Flex in advance and decided what payment term you wanted? Perhaps next time you can factor in a little time to pick a plan straight after purchase to avoid this from happening again. This is what I do

To explain a few points… The original logic for “defaulting to 12 instalments” rather than 3 if you don’t pick a plan is that it’s worse to take 1/3rd of a payment from a customer what want’s to have a 12 month plan than the other way around. This is because for that customer, having a larger payment taken from their current account than they’re expecting in a month could make their financial position worse. The risk of “defaulting to 12 instalments” for the customer who wants a 3 month inter…

Sometimes my notifications disappear before I see them; if I hadn’t seen this, I would be unexpectedly charged and been very unhappy. I have concerns with hidden charges, and that’s what I consider this notification.

You wouldn’t btw, as if you haven’t done it after a period of time, they switch to SMS, and then phone call, and then pigeon, then owl, then hawk, then @TheoGibson will eventually turn up on your door step and ask you to pick one

I mean, I’m pretty certain this is in the T&Cs you sign up to when applying for Flex. I’m fairly certain I recall reading it.

For me it’s just a reFLEX (hehe) when I pay via Flex to go and choose a plan straight away. It’s how Flex works and should be something you do when you agree to the line of credit.

Quite the tone in the responses.

Please bear in mind I put this in the feedback forum section and I’m entitled to my opinion too.

I understand that it’s the terms, but as per my feedback, I personally would prefer to not be automatically put onto a more expensive plan. If I want the interest I believe I should explicitly opt in for every payment I make with Flex.

If I want the interest I believe I should explicitly opt in.

There have been threads on having a default payment plan option, and I don’t think it’s something people have an issue with discussing per say.

I imagine that the response has come from the idea of Monzo being distressing or somehow threatening.

If there was a default ‘Pay in 3’ box I’d tick it, since that’s how I use Flex exclusively.

Quite the tone in the responses.

There’s zero ‘tone’ in the responses, just because people aren’t agreeing with you that’s not tone. You’ve been presented with actual facts and how the process works.

Perhaps the wrong wording then. I think people are focusing on my feelings rather than the suggestion.

I too would prefer the pay in 3 and that’s what I was somewhat suggesting; that we should each be able to set our defaults. Personally, it should be a frictionless process.

If there was a default ‘Pay in 3’ box I’d tick it, since that’s how I use Flex exclusively.

Ditto. But taking 10 seconds to tap a notification and choose isn’t really an issue.

And the reply from Theo hints at that, that might be the case. I think it would cause chaos personally, so I think the current way should remain. But what do I know

Virgin Slyce do pretty much the same. You have around a week to choose a plan but, if you don’t, it defaults to 12 monthly payments with a fee (i.e. interest).

I haven’t read the whole thread - pretty much just the original post.

We’re working on this at the moment - you can hopefully expect more in the next 2 - 3 months.

For what it’s worth, for clarity - For the time being:

Unfortunately on this forum you cannot express your opinion! Some people think they are in charge of it and go straight in criticizing everything people say! Sad but true.

And my post of course was hidden cause I can’t express my opinion!