Early Payment Screen - I would like to turn it off!

I dont think there would be too many complaints with that

There would be a boatload of complaints! “I got paid last month at 4PM, Monzo is withholding my money and I need to feed my 8 kids!!!”

I think it’s more likely that it goes away completely. It must be a huge drain on support. Every month people join here and ask because they can’t read and they all blame Monzo because they’ve used the feature once and now expect it.

I don’t get that. The load will be greater overnight. Or are the staggering individuals’ payments during the night?

Personally, I think that (optional) auto payment at 4pm for Plus would be a good extra. For free customers, you can always just tap the wallet to avoid pulling down the money.

I simply don’t understand how Get Paid Early can be profitable for Monzo, considering the amount of support inbound it clearly generates.

I don’t get that. The load will be greater overnight. Or are the staggering individuals’ payments during the night?

Well i know personally i have 2 scheduled daily payments and these action at 1:57am and 2:01am every night/morning.

I assume the reason its set to these times for the same reason why im suggesting that everyone would get “auto paid early” at different varying times between say 4pm-5pm the day before payday, the manage the load?

E.g if i knew id get autopaid at 4:27pm everytime i wouldnt care that i could theoretically claim it 27 mins earlier

randomise the time so some people get paid early at 4.01 and some at 4.15 etc

This could be mitigated by updating the strings in app to update the “come back at x to claim early” text to show the real time that their pay would come in, be that 4:10 or 4:12 or 4:15

People dont message support at 12:01 and ask where there pay is at the minute because theyre now used to it to it coming at a set time.

I think the same could be true if get paid early became regular and at a set time.

People dont message support at 12:01 and ask where there pay is

They probably do though, judging by some of the comments!

I don’t get this either. Barclays pay me 24 hours early, on the dot at midnight, every single time without fail.

Although i don’t mind the animation, despite my preference for something like this to be automatic, I do think users should be able to disable the fancy animations as an accessibility thing.

They probably do though, judging by some of the comments!

In the focus groups I’ve taken part in, I’ve learned that it’s a lack of consistency that leads to complaints with stuff like this.

I’d wager that the mere fact Monzo market this as a feature is why it leads to complaints. If it was just done, transparently, in the background, for eligible payments, and the time was consistent, there would be very few complaints.

People tend to worry when the experience alters slightly from the usual and expected. In that heightened, anxious frame of mind, they’re going to be hunting down that live chat button like it’s a chicken drumstick in the midst of a KFC chicken shortage.

The manual approach in theory should mitigate much of this, but it doesn’t, and I suspect it’s for this reason. Some times my upcoming payments for Monday will appear in my feed on Thursday with a message to come back on Friday at 4pm. Other times they won’t show up until some point Friday morning. When I get used to seeing it on Thursdays, then one day it’s not there, I do get anxious that my money hasn’t gone through. It always has shown up, but it doesn’t stop that feeling.

Although I know better than to go panicking to support and instead wait for the actual pay date to arrive, I can fully sympathise why many people will do that, particularly those living paycheck to paycheck, relying on this feature to get them by, because it’s very existence has shifted their budgeting period.

If it was just done, transparently, in the background, for eligible payments, and the time was consistent, there would be very few complaints.

This is the problem. The people that complain aren’t doing so because Monzo have done something wrong. They think they have, so that’s why they end up here.

Hi so I usually use the paid early scheme and I’m due to be paid tommorow but the paid early box thats usually there is not there today. I’ve heard rumors that monzo have been taking peoples money and its taking 6 weeks to get it back. I’ve tried asking on the live chat but no reply. I’ve also tried calling a number of times and no answer. Could somebody please shed some light as I need this money for Xmas presents otherwise my daughters Xmas will be ruined. Thanks

This turned out to be a faster payments because it was Christmas.

Just realised I only changed bank details yesterday. Will this effect anything? Like will I still get paid into monzo but not until tomorrow or

They’re all have the same theme running through them and it’s not Monzo’s fault in any of them. Making it auotmatic wouldn’t have paid these people, so they’d still be here complaining.

Making it automatic at 4:00pm or staggering it won’t change people complaining that their faster payment hasn’t appeared.

Oh wow, these are painful to read… it’s not really the user’s fault but there needs to be financial education to make sure as few people live paycheck to paycheck as possible.

I don’t think anyone in this thread said that they can’t survive the extra 24 hours if they couldn’t get their money early.

I’ve been a customer since 2018 and have been a plus member multiple times, I think the choice of whether I want to go through the fancy animation should be left up to me.

Yeah it’s cute and all, but watching it over and over again is annoying and unnecessary.

Not in this thread, but from all the posts that appear here on various paydays it’s clear that people will be bankrupted if they don’t get their money early (or they like to say they will)

I think it’s just sad all round

Barclays pay me 24 hours early, on the dot at midnight, every single time without fail.

I have my salary paid into a high street bank but I can never tell if they’re releasing money on the payday or releasing the money early. That’s because my employer doesn’t 100% commit to a specific payday. It just says I will be paid during the last week of the month.

Maybe the way my employer does things is abnormal, but do your employers commit to a specific payday enabling you to validate that banks are releasing funds early?

but do your employers commit to a specific payday enabling you to validate that banks are releasing funds early?

Technically speaking, I am one of my employers, and I pay myself consistently every 4th Monday via BACS, which Barclays provide to me on the Friday before. Other employers both now and in the past are quite consistent too.

but do your employers commit to a specific payday enabling you to validate that banks are releasing funds early?

First of every month. Which will arrive on Friday 29 January.

I’ve never had a legacy bank pay my BACS payment early. Though I suppose I am more aware of when things hit my actual account due to Monzo and notifications than I am in the past.

Monzo have always stated that 4pm is the time they can guarantee the payment, so if other banks are doing it 24 hours earlier, I’d be curious as to understand how they can - are they taking a risk, or is there “place” in the BACS system different to Monzo’s (not sure if that’s a thing)

I agree with the sentiment of get paid early simply shifts the pay check to paycheck cycle for those affected - that was something often pointed out when it launched - if you are paycheck to paycheck, it helps exactly once - and as someone who was in that cycle for a very long time - I’m not surprised to hear it either.

I’m in favour of removing the animation if so chosen (1 action fewer is always good), and I like the suggestion of it being Automated in the Plus users category. I imagine that strikes a nice balance of low cost/risk to implement and a nice outcome for Plus users.

so if other banks are doing it 24 hours earlier, I’d be curious as to understand how they can - are they taking a risk, or is there “place” in the BACS system different to Monzo’s (not sure if that’s a thing)

Could it be that the employer account is the same as the employees account? I was using Barclays a couple of years ago and I never got paid early so it doesn’t work the same for everyone unless it’s a more recent thing that Barclays have started doing

In my case, I’ve been getting paid early from Barclays for over a decade, so not new. Can’t say for certain one way or another if all my former employers used Barclays though. Perhaps your employer didn’t pay by BACS?

The tricky thing with banks not being transparent with or advertising their processes in this regard the way Monzo do, is it’s hard to gauge what the criteria is for it to work. Could it be dependant on the originating bank? Perhaps only a subset of users? Branch dependant maybe? Customers worthy of credit?

It wasn’t until a few folk on here said otherwise that I’d even considered that Barclays paying you early was not the normal thing. A good portion of my friends back home banked with Barclays, we all got paid 24 hours before colleagues who banked with lesser (slower to pay) banks like Nationwide.

I do get paid with BACS, just never been paid early until I moved to Monzo. I guess this is the reason legacy banks don’t advertise a “get paid early” feature because they don’t offer it in a consistent way that applies to everyone receving money via BACS. My wife used to be with NatWest and get paid early but after moving to Barclays that stopped happening…

Technically speaking, I am one of my employers, and I pay myself consistently every 4th Monday via BACS, which Barclays provide to me on the Friday before. Other employers both now and in the past are quite consistent too

I wonder if it’s the fact that your payday is always a Monday that leads to your own experience of always getting paid early.

Not sure how info in the following article has been sourced but it mentions that when payday is a Monday some banks will release money early (Friday or Saturday). However no mention of early release if payday happens to be Tuesday to Friday. 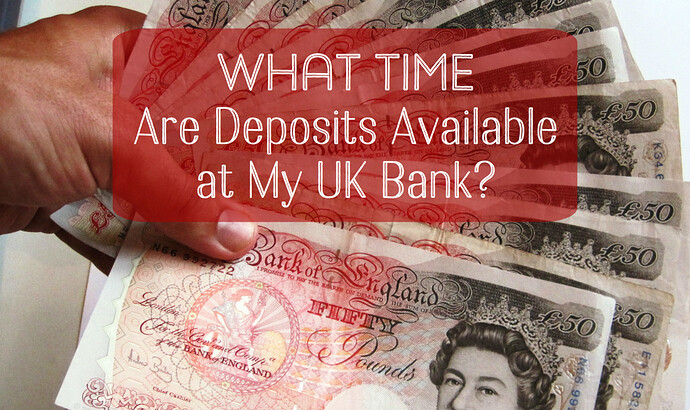 When Does My Money Go Into My UK Bank Account?

What time do my wages and payments actually go into my bank account? Here's a list of times that banks update user accounts and release funds.