Continue the discussion below as usual

Two features I think we need:

The ability to create custom categories.

The ability to split a transaction across multiple categories. Eg a big shop at the supermarket could well contain several categories of spending rather than just all be groceries.

Thanks for your suggestions

I think we’ve considered both at some point and we will definitely keep them on mind for future iterations. Problem with them (and the reason we don’t have them yet) is that both require some effort from the users. We’re aiming to build something that (ideally) will require zero effort on your side… so we have a tricky trade-off here, should we give you something very simple knowing that we are leaving some cases out or should we try to cover every edge-case and risk building an overly complex product? We’re still figuring out the right balance

The multi categories should be considered outside of custom categories.

Currently I am on holiday, and I am buying food, i am travelling etc. I need to make these with two categories, food + holidays or travel + holidays so i can figure out how much im spending on holiday.

Custom categories are the main thing I’m wanting at the moment. You could add a beer category and scare yourself how much you are spending on pints!

So I totally understand that it’s easier for Mondo to maintain default categories (then they can make meaningful analysis and suggestions), but I also think that default categories are crucial. So the key is to find a solution to it, which wouldn’t be too heavy on the tech side.

I suggest an option to rename current categories (retaining the meaning but customising to your needs, e.g. I’d change ‘Eating out’ to ‘Going out’, because I eat out daily at work, but I wouldn’t consider these expenses different from buying groceries, whereas ‘Going out’ is quite different) and having a limited number of custom categories. Then it would allow for some level of customisation, but wouldn’t be too difficult to implement technically and to use in analysis and reporting.

Or – having major default categories for default reporting, and custom hashtags (as you had in the beginning, I suppose, at least it’s shown in the video) for export into CSV (and then users can do whatever they want with it).

Splitting and such is useful but non-essential. In the end, it’s a banking account, not a budgeting app. Maybe if you implement ‘split the bill’ function (allowing to split the bill with friends), you could also integrate categories into that.

@pavel that kind of “soft” customisation sounds really cool, we’ll think about it. Thanks!

Need a Software category! Putting it in Bills or General is the most fitting at the moment, but feels wrong

Just jumping on this - currently buying a wedding gift for my friend/ valentines day presents for my girlfriend - would be create to have a ‘gifts’ category.

A drink at your local is currently categorised as ‘Eating Out’

Perhaps subcategories are the answer?

I’ve been finding the notes field useful for a bit of a hacked version of custom categories.

For example, every time you buy beer, include the word beer in the notes field, then if you use the search function in the transactions page to search for “beer last month” it will pull through any transaction tagged beer from the previous month. Pull the screen down and you get a total spend and an average.

You miss out on the neat summary screen etc. but handy if there’s a specific spend you want to keep track of.

Another vote for this, some examples I’ve come across:

It’s not clear to me if the best way is changing the defaults, adding a layer of sub-categorisation or allowing user “tagging” of transactions and merchants in addition to the defaults.

I’m sure I’ve seen a screenshot somewhere that was a version of this that had hashtags. It seems like tagging would be a much more useful option to have (possibly in addition to categories), as they can be freeform, and you can assign multiple tags to a single transaction.

The problem I have with opinionated categories is that they just won’t work for a lot of things. Here are screenshots from three different iOS apps with expense categories: 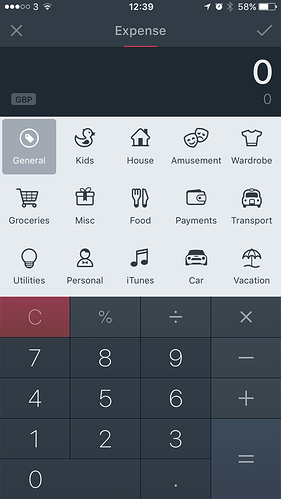 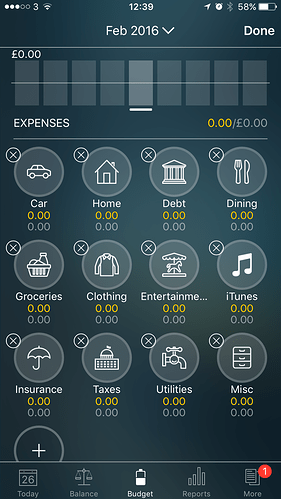 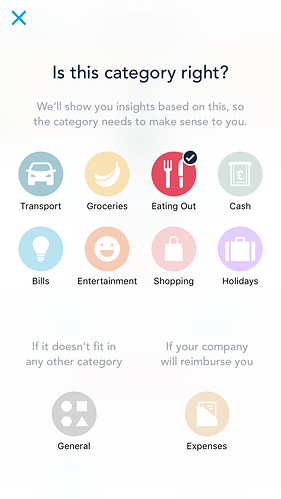 Each of them are different, none of them is “ideal”.

Could you maybe allow for custom categories but still provide defaults?

Thanks for your suggestions @jack

First of all, please don’t think we’re going to keep the categories exactly the way they are now. We’re constantly learning and we’ll adjust them to make them better (we’ll create new, split others and probably remove too). As you well said, probably they will never be ideal but I think we all know we still have lots of room to improve

Regarding tags and custom categories. Both options have important tradeoffs (the reasons why we haven’t build them yet).

There are ways to solve that but it’s one of those cases where (I think) reducing the complexity in the first place is the only acceptable solution. Yes, it’s a bit less powerful, but it’s way easier to understand and use for the average user.

I know my reasons sound a bit abstract because we don’t have any of this built yet, but let me ask you for a leap of faith and you’ll see it does make sense once we have the rest of the pieces in place

Good thing is that thanks to the API I’m sure sooner or later we’ll have apps exclusively designed to let you perform all sorts of powerful categorisations and reports, made by power users for power users

You should have a look at the Lloyds categorisation of transactions for Money Manager - it is pretty good and 99.9% of transactions were categorised properly. For reporting purposes they only show the top category but you can look at the sub categories if you want to drill down into how/where you are spending in that area.

Here’s an example of splitting from UBS online banking.
They have a demo site.

I get the aggregation benefit - it would be cool to benchmark spending against peers.

If you’re going to go down that route though then please give us more granular categories (I like the sub category idea).

Sub categories would mean you can aggregate at the different levels and basic users that don’t care about more granular control can simply view at the higher level.

Those that do, can drill down in the UI to the more granular level (eating out -> coffee) and help you categorise transactions into those buckets.

It’s not perfect, but it’s closer

I’m putting all my daily expenses through Mondo now and the lack of granularity is getting a little frustrating.

No custom categories would be a deal-breaker for me (ideally splitting categories too). The ‘one size fits all’ approach taken by budget apps I’ve used in the past has made me stop using them. They may work 95% of the time, but the final 5% is what stops it being useable.

Is an ‘advanced mode’ feasible, so you can keep it simple by default but if someone wants to be more of a power user, they can enable an advanced mode in the settings?