Some nice ideas in recent posts on best experience for splitting bills/spending. Considering the key to making Monzo profitable must be to get people to use it as their ONLY bank. At present they only see £500 a month from me rather than considerably more that would sit there if my salary went in.

Cross posting an update on this from Jami

Right now the ‘Committed Spending Pot’ (probably not the final name) isn’t being actively worked on, but the team that is working on Paid Early have it in their sights as something they might pick up next, and they’ve been exploring the designs for it. (I can’t promise that they’re going to work on it next, though!)

It was posted quite a few posts up. Very disappointing news

Right now the ‘Committed Spending Pot’ (probably not the final name) isn’t being actively worked on, but the team that is working on Paid Early have it in their sights as something they might pick up next, and they’ve been exploring the designs for it. (I can’t promise that they’re going to work on it next, though!)

Hi @Jami , thanks for the update (even if it’s not one most will want to hear)?

Can I ask why?

For as long as I can remember, there have been customers of Monzo/Starling who have been screaming for this functionality. Given Monzo’s ethos around budgeting, and the existing Pot functionality, it seems the perfect fit to have what a lot of people would consider “a killer feature” take more priority?

It really does seem (to me at least), that Monzo are opting for some “easy wins” or features that are all about profit - Whilst I have no issue with the latter, it would be nice to see some really strong features balance it out.

The whole “pay early” doesn’t seem to have captivated many people - From my POV, I just don’t see the point

- I get it might be useful if all the stars aligned and you really needed money that extra day early… But you’ve then got to do it again next month, which makes it a normal time frame, or you wait an extra day which makes it a longer month

I’m sure this will be an unpopular opinion, but it feels like one of those features that makes a good social media and blog post… Rather than give people a real improvement with their banking experience.

The committed spend pots would literally be life changing to a lot of people (based on what they’ve said), and whilst you can get to a similar point with legacy accounts (through the use of multiple accounts), it’s not something you can get close to with Monzo.

Given this was touted as something that was in the works, and available to staff not long ago… What happened for it to become shafted?

I appreciate you have said it isn’t cancelled… But when Monzo aren’t actively working on it, and it might be looked at next… We are usually talking years, not months

Monzo is currently drafting a response - I can however give a preview of it.

whilst you can get to a similar point with legacy accounts (through the use of multiple accounts),

In short - my team (who started work on the first version of Committed Spending Pots), got a basic version working, but it was still quite clunky, was missing major features, and didn’t interact very well with the rest of the app, you could run into issues with budgeting, and things were in general a bit noisy.

For those it worked well for, it really worked well, but for others it made things more confusing.

At that time, there were a lot of moving parts when it came to how Pots work, and how the overall app should be structured - and we ran the risk of trying to make too many very interdependent changes at once. It got a bit sticky, so we took what we’d learned, and looked for other places to have impact in the meantime.

The first steps into account aggregation was another path of investigation into the problem of segmenting money across different accounts for different purposes. Given how varied people’s set ups are, I doubt we’ll find one solution that works for everyone.

You might have seen some of the sneak peeks of the App Restructure that is in progress. Some of the changes there might end up reframing how Accounts and Pots interact with each other - so we want to make sure that foundation is solid before adding something like Committed Spending Pots on top.

Hope this adds a bit more depth to why something that seemed ‘done’ is still pending.

Hope this adds a bit more depth to why something that seemed ‘done’ is still pending.

It does, thank you

Us as customers will never fully understand the decisions that are made, and why certain things aren’t being worked on or even in the pipeline at times (I’m looking at you, merged payees on iOS…).

I personally think the whole DD’s from Pots (or Goals if you are of the Teal inclination), would be a huge win, and I’m really surprised it wasn’t given more prominence from the off.

Appreciate your answer though, and I hope you can see why it’s a little deflating for a customer to see something that nobody seems to have asked for (paid early), be shouted about as a killer new feature, when something that people have been crying out for has been put on the back burner.

I get there are reasons for it, and those reasons make sense.

I would love to see a bit more interaction with the “fanbase” on what is being worked on, and what we can expect. Even if I thought the Big List was just a marketing exercise, it still gave some idea as to what us, as customers could potentially expect in the near future.

With it looking like this is not coming soon think I might need to take the hit and try out starling as a bills account as others have suggested. It’s frustrating as I have only just finished moving all the direct debits over to Monzo recently.

Does anyone have any referal type links for Starling they want to use? I have never looked at them before.

I’m definitely keeping a close eye on this. I, like maybe a few others, have subscriptions that come out annually/quarterly and my rent is once a term (student here

) so I currently have to have separate pots to save up monthly for these and then withdraw from my pots when necessary. Especially for my annual subs, it’s be great to have a pot where I just put everything

Having read through a majority of this thread I can see both the way in which this people would like this to work and limitations that are imposed by the way the app works.

I currently have current accounts with five banks and make use of a budgeting app called Wallet; prior to this I was using Piggy bank. These apps allow me to schedule and plan regular (weekly, biweekly, monthly, annually) payments and cash flow forecast across each of my accounts. I currently have around 50 of these setup and use each account almost as individual commited spend pot.

Adding this kind of functionally to Monzo would be a game changer for me; the way that Monzo could automatically detect those regular payments and work out the planned payments would be amazing.

Even more ideally id like to schedule money into a pot each time im paid and assign all of my direct debits, standing orders and recurring card payments to come out of that pot too.

This is a cool idea. Hopefully something we’ll be able to offer in the next handful of months

I’ve resigned myself to the thought that Monzo has a few nice features like instant notification for transactions, card freezing and a few other small things, however other banks are catching up with those too.

I either expected too much from the hype or am a bit jaded seeing how much has been talked about on here and is on the coming soon list but isn’t materialising.

For now, I’m OK with having salary and spending at Monzo and bills/DDs with Starling.

EDIT: Salary has moved to Starling so my Monzo account is spending only.

Monzo releasing this feature is the only thing I’m waiting for to go full Monzo and close my other bank account. I hope it happens soon!

I’m able to achieve something similar to this using IFTTT and Google Calendar! It’s not the easiest thing to set up as it’s quite involved and can take up-to 3 minutes per bill. I have made a suggestion to Monzo that could improve this and make managing your budget as easy as creating and moving events in a calendar. Where the description line is the amount to pay into or out of a pot and the Location line on the calendar event would be used to let IFTTT know which pot to work on. 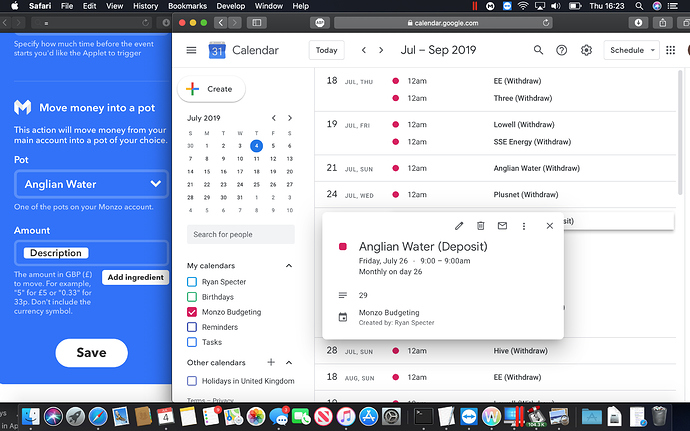 I’ll vote no.
Just get all DDs set up to be taken on pay day or within a couple of days. A bills pot is pretty useless then.