Apple is extremely hard to deal when it comes to those things so I wouldn’t be surprised if Android Pay came out first.

Any time lines on this?

They’ve got it on the roadmap for the next 3-6 months.

It’ll be great if we can add our Monzo card to Apple Pay so you wouldn’t have to take your card out of your wallet every time you pay for you daily coffee, right?

This is a really good idea, I’m shocked as to why nobody has thought of this before! +1 Lets get this done 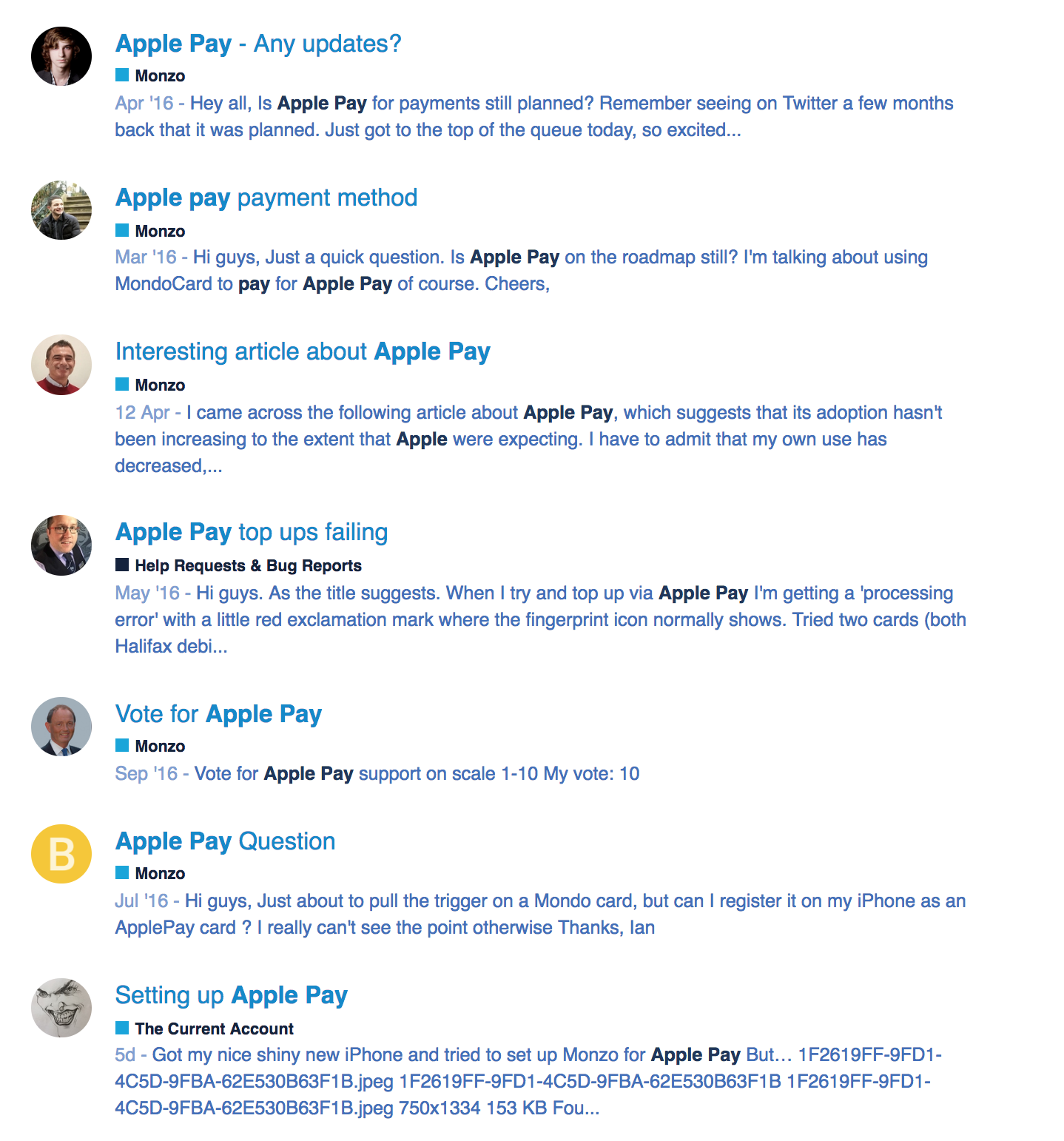 Hi any update on timeline for Apple Pay?

I think this is on other threads too. But in essence I don’t think they’re allowed to really say do to NDAs with Apple until the functionality is launched.

So all you’ll get is, it’s coming

can’t wait… it’s one of the main reasons I don’t use monzo so much. APple pay on watch is brilliant … (I use it with barclaycard)

Don’t forget Apple takes a percentage out of every transaction done with Apple pay. Maybe it simply isn’t worth it for Monzo to hop on the Apple pay train?

Lack of Apple Pay is definitely my main Monzo frustration at the moment. Pretty much only using Starling as my ‘daily spender’ now because of it. Just did a quick count up, in the last 7 days I’ve made 28 Apple Pay transactions… it’s just so convenient especially with Apple Watch.

Any idea how long it’s likely to be before it’s introduced??

Hey all, Is Apple Pay for payments still planned? Remember seeing on Twitter a few months back that it was planned. Just got to the top of the queue today, so excited to try Mondo.

They’re under NDA so it’s on the roadmap but even if they were working on it they wouldn’t be able to take about it until they actually launch.

(no one told me I couldn’t say this…)

That’s great - thanks for the feedback Andre!

(no one told me I couldn’t say this…)

Given that Tom announced this a couple of months ago I don’t think you’re giving too much away:

It will go into internal testing sometime next month! Publicly available after that point, if testing goes well

Given that Tom announced this a couple of months ago

It’s just the ease of use. I rarely carry my card around with me when I’m in Dublin as my Euro bank account accepts Android Pay and all places now accept Android pay all I need is my phone.

In NI, I use Monzo where I can… and even places like Tesco’s I’ve got TescoPay+ setup for my Monzo card and Clubcard. I don’t need to worry about leaving the house with my wallet.

We use cards to be a cashless society, but I still need to carry about my wallet. Android pay takes the need away from me to carry anything but my phone.

It also has a higher limit for contactless, when the place accepts it and in my case only works if you have access to my phone and it’s unlocked… While my card will work if you just took it from me… for a while.