Blue card is nice and sparkly though 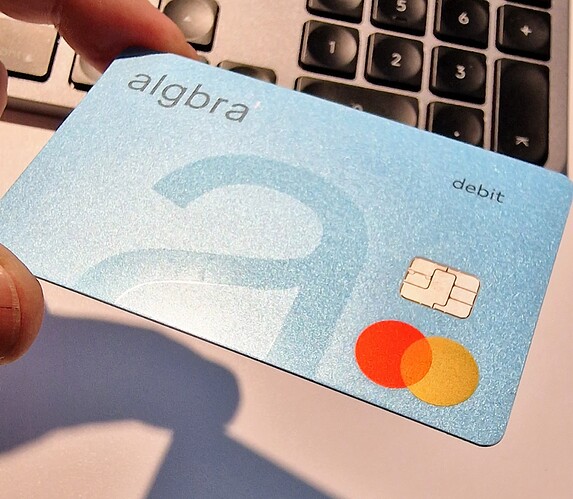 Oh no, the granny car finish

Metallic finish can look ok on cars (although I prefer a nice simple colour myself), but the washed out pastel finish applied to debit cards (Starling and now Algbra) just doesn’t work in my opinion.

So far my experience has been not great with Algbra… my card arrived, and I promptly shredded the envelope and cover letter like I always do. Well, turns out there was a code on it that I needed to activate the card…

Won’t let me reorder a card, and chat picked up my query in under 15 minutes, went off to “investigate” and haven’t got back to me in 2 weeks despite repeated chasers. Almost like I’m talking into the void

I’ve used the card once, on 8 November. The transaction still shows twice in the app, once as a cleared transaction and once as a pending one. Both transactions show against my available balance, so the app currently shows me with a negative balance.

I won’t be using it again until this is fixed - and the fact that it hasn’t been in two weeks doesn’t fill me with optimism.

I even tried a top up and transaction straight after - it worked perfectly- compared to Monzo once where it didn’t.

I’ve offset my transactions but not the flight

The cashback has taken 4-5 days to be paid out - it just puts it into your account.

Very brave to test an early beta abroad like that!

Lots of folks seem to report duplicate transactions, but I’ve been using them as my main spending card for a good 3 weeks now and haven’t experience that once.

One niggle I’ve had though is the odd transaction going through fine and the money being taken, but no push notification or subsequent transaction in my account to document it. Have to chase these up with support and they eventually do show up after they investigate so aren’t totally lost in the void, but it’s definitely not in a polished enough state for this sort of use yet IMO.

Even transferred cash out to another account - less than 60 seconds - does say Algbra on the transaction fees but that was with NatWest.

I’ve probably only done 25-30 transactions- 2 didn’t get notifications - well I wouldn’t as the iPhone was in do not disturb.

Whether it was Monzo, starling, dozens, N26 - all tested fairly early abroad just to see how they work.
Always carry a back up card in case (learnt the hard way in beta).

Not sure how the 1% cashback is financed though.

Not sure how the 1% cashback is financed though.

Some loss leader, they must have deep pockets somewhere

So how do we pronounce this company?

It’s capped at £10 per month (only your first £1000 spending earns cashback each calendar month). Can’t quite fleece it how you can Chase. It’s effectively a £120 bribe to sign up and use it exclusively for a year. They’ll recoup some of that from you putting your spend through them. More presumably if you buy their offsets as a result of their carbon tracking features.

Not costing them much more than Revolut’s approach where they pay you £60 just to refer someone. It’s just clever marketing, because psychologically, something like this feels better and more rewarding, even if it necessarily isn’t. Goes back to that rather addictive loop Chase have carved between cashback and roundups. It feels better than it really is, or that you could get elsewhere. Largely because we’re a YOLO spending society, and this encourages that pastime and rewards for doing what we want to do with our money, rather than rewarding us for what we generally don’t like to do with it: save.

I redownloaded the app mainly out of curiosity. I have to say, it has a really nice look and feel to it. I’d even go to say that it has the nicest look out of all the ‘fintech’ banks, if not a little revolut like.

But that’s where it stops for now. The signup was for me very flaky, I had to keep waiting for magic link emails to re-send (why the 10 min limit) as they kept failing. Plus the things I’ve read both on here and trustpilot mean I’m not prepared to use it any further at the moment.

One to watch though, if they make it and dont go bust/get aqquired looks like a really interesting journey.

So I was keeping a bit of an eye out about Algbra to see how they do as I do like the ethical/sustainability idea behind it.

I tried to sign up last month and they were just doing a ‘sign up to our waiting list and we’ll let you know when we’re ready’ and I never heard anything back (maybe it got junk mail filtered?).

Anyway - thought I’d give it a go and download the app again and see if I could sign up - and it did all go through without any hiccups.
The signup for me was very straight forward - had to confirm email, then my name and address and then upload ID documents and take a video but it all went through without any issues - took about 5 mins.

I do like when you give them your address it pops up with a 3D map of the area and asks you to confirm this is the right place - that’s a nice touch.

One thing missing at the moment appears to be Apple Wallet (and I assume Google Wallet) support - I assume that’s a work in progress and when you register you get to choose a virtual card or a physical card and the virtual card is only really any good for buying things online and not day-to-day shopping. Seems silly to have a virtual only card option, but then not offer to setup in ApplePay/Google.

There’s other evidence of the ‘work in progress’ on it (which, to be fair, they’ve only just launched so ‘give em a break!’) but in ‘Card Settings’ it says ‘Set Limits, rename card or delete and more’ and at the moment all you can do is rename or delete and deactivate the card.

The app is very very like Revolut though - so much so that I suspect it’s a ‘white label’ version of Revolut under the covers.

When my physical card arrives sometime next week, I’ll stick some cash in the account and see how I get on spending money from it…

The app is very very like Revolut though - so much so that I suspect it’s a ‘white label’ version of Revolut under the covers.

I’m starting to think this. I know that @N26throwaway mentioned that it was mainly down to design standards but some of the views/graphics are identical. So my guess is they’re using whatever platform Revolut are using and re-using design elements from it.

Lovely looking app by the way and I gave into temptation and ordered another black card, mainly for collection but I might be tempted to stick a few transactions through to see how it goes. I’m still not really prepared to use it for any more than that, currently.

Who knows what may happen in the future though, that app is the nicest one I’ve seen yet.

mentioned that it was mainly down to design standards but some of the views/graphics are identical.

That’s the whole point of things like AppKit and SwiftUI. Keeps the experience familiar between apps when developers utilise to its fullest potential.

It’s looks very similar, but they’re not 1:1 identical, and functionally it operates differently too. Go digging and you’ll find unpolished rough edges within Algbra that don’t exist with Revolut.

There is some overlap in the tech that underpins though. I think it was mentioned above, but the white label service they use is modulr FS, who Revolut also happen to use, among others, like hyperjar. But again, I doubt Modulr are underpinning the front end interface.

I watched one of the initial videos that the co-founder produced and he was pronouncing it “al-ge-bra” as in the maths side.

A lot of good, and some fluff, but the video is below for you to make your own conclusions