When app is in background the data are not masked

What would this achieve?

Someone can’t see a number in the split second as you swipe through apps?

It already does, at least in iOS?

And I agree with @Revels

It doesn’t on Android. Another one for the parity list…

You can do it system wide from Android I think, it was mentioned the last time this was asked for.

Its working in iOS and in android it’s not and I as a monzo customer
just want to share my thoughts that if we put the app in background and its shows all my details is not good, so if we implement the similar functionality which is in iOS for android it will be good

I’m on Android and I’ve just tested this.

It’s another one of those things where someone has to be looking right over your shoulder and you have to “hang” on that screen for soooo long for them to be able focus to read anything.

It’s an issue but very minor in the grand scheme of things in my opinion.

I think it’s possible on Android with the do not allow screenshots function that a lot of banks use.
This also hides it from the multitasking screen.

Just swipe it away after using the app or toggle the hide monzo from recent apps, if you want it permanently hidden from view. 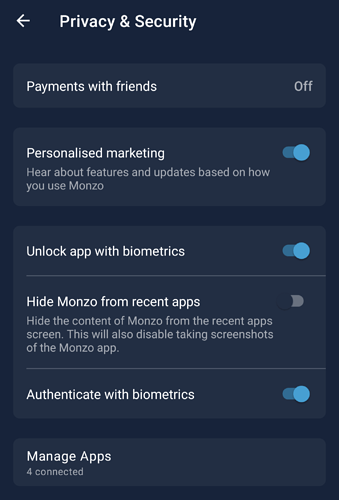 By default it has screenshots turned off and when you toggle to another app it blanks the screen.

If you go into the app and enable screenshots and allow for 15mins and then toggle it’s visible.