What you reading/listening to?

What are you/have you enjoyed?

I really enjoyed the Martian, less so Artemis, but it was still good enough.

I have pretty eclectic tastes, so what has appealed to you?

I recently started reading the Pretty Little Liars series of novels. As someone who doesn’t usually read many books I’ve been pretty addicted to these ones and burning through them pretty quickly. I don’t remember the last time a book has gripped my attention like these have.

I have just finished reading The Ballad of Songbirds and Snakes.

I actually found it was a very well paced book, until the ending when it was a little quick. It was interesting to see how certain players in the later books started out.

This book is on my reading list! I loved the previous books in this series.

Stephen Fry’s Greek mythology audiobooks are incredible. Off the top of my head Mythos and Heroes are the two out now and there’s one on Troy on the way.

Even if you’ve got no interest in Greek myths they’re brilliant.

Thanks for the ideas so far!

Alone in Berlin by Hans Fallada was my last read and it was fantastic.

After reading The Martian (before the film!) and Artemis (I agree with your take on it - good but too short and lacking character detail) a good few years ago, I read (among others) 2 books which really stood out at that sort of level - New York 2140 by Kim Stanley Robinson and The Fireman by Joe Hill.

New York 2140 had a very interesting story and extremely well written. I genuinely could not put The Fireman down, why it hasn’t been made into a blockbuster film yet is beyond me.

I’ve been re-reading an old childhood favourite, The Hitchikers Guide to the Galaxy, a triolgy in 5 parts.

I love that book for this passage alone:

“So let me give you the layout. Me sitting at the table, on my left, the newspaper, on my right, the cup of coffee, in the middle of the table, the packet of biscuits.”
“I see it perfectly.”
“What you don’t see,” said Arthur, “because I haven’t mentioned him yet, is the guy sitting at the table already. He is sitting there opposite me.”
“What’s he like?”
“Perfectly ordinary. Briefcase. Business suit. He didn’t look,” said Arthur, “as if he was about to do anything weird.”
“Ah. I know the type. What did he do?”
“He did this. He leaned across the table, picked up the packet of biscuits, tore it open, took one out, and …”
“What?”
“Ate it.”
“What?”
“He ate it.”
Fenchurch looked at him in astonishment. “What on earth did you do?”
“Well, in the circumstances I did what any red-blooded Englishman would do. I was compelled,” said Arthur, “to ignore it.”
“What? Why?”
“Well, it’s not the sort of thing you’re trained for, is it? I searched my soul, and discovered that there was nothing anywhere in my upbringing, experience, or even primal instincts to tell me how to react to someone who has quite simply, calmly, sitting right there in front of me, stolen one of my biscuits.”
“Well, you could …” Fenchurch thought about it.
“I must say I’m not sure what I would have done either. So what happened?”
“I stared furiously at the crossword,” said Arthur, “couldn’t do a single clue, took a sip of coffee, it was too hot to drink, so there was nothing for it. I braced myself. I took a biscuit, trying very hard not to notice,” he added, “that the packet was already mysteriously open… .”
“But you’re fighting back, taking a tough line.”
“After my fashion, yes. I ate the biscuit. I ate it very deliberately and visibly, so that he would have no doubt as to what it was I was doing. When I eat a biscuit,” said Arthur, “it stays eaten.”
“So what did he do?”
“Took another one. Honestly,” insisted Arthur, “this is exactly what happened. He took another biscuit, he ate it. Clear as daylight. Certain as we are sitting on the ground.”
Fenchurch stirred uncomfortably.
“And the problem was,” said Arthur, “that having not said anything the first time, it was somehow even more difficult to broach the subject the second time around. What do you say? ‘Excuse me …I couldn’t help noticing, er…’ Doesn’t work. No, I ignored it with, if anything, even more vigor than previously.”
“My man…”
“Stared at the crossword again, still couldn’t budge a bit of it, so showing some of the spirit that Henry V did on St. Crispin’s Day . .”
“What?”
“I went into the breach again. I took,” said Arthur, “another biscuit. And for an instant our eyes met.”
“Like this?”
“Yes, well, no, not quite like that. But they met. Just for an instant. And we both looked away. But I am here to tell you,” said Arthur, “that there was a little electricity in the air. There was a little tension building up over the table. At about this time.”
“I can imagine."”
"We went through the whole packet like this. Him, me, him, me…”
“The whole packet?”
“Well, it was only eight biscuits, but it seemed like a lifetime of biscuits we were getting through at this point. Gladiators could hardly have had a tougher time.”
“Gladiators,” said Fenchurch, “would have had to do it in the sun. More physically gruelling.”
“There is that. So. When the empty packet was lying dead between us the man at last got up, having done his worst, and left. I heaved a sigh of relief, of course.
"As it happened, my train was announced a moment or two later, so I finished my coffee, stood up, picked up the newspaper, and underneath the newspaper …”
“Yes?”
“Were my biscuits.”

Watched Noughts & Crosses on the box and decided to read the books by Malorie Blackman - I’m up to book 5 now.

Will investigate their other writings when I’m finished with this series. 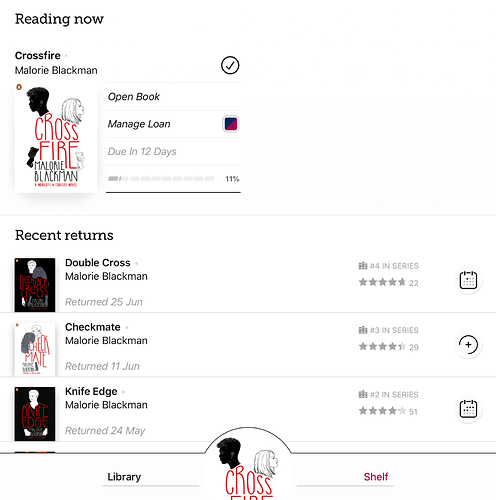 Thanks for the recommendations folks, I’ll check them out